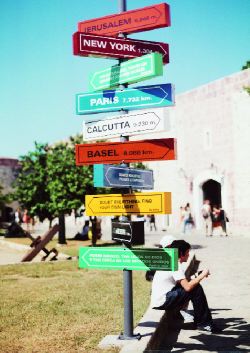 Under the idealistic rubric 'One Closer to the Other' the seventh Havana Biennial proposed to consider communication in the current technological age. Using the impact of new technologies as a touchstone, some of the most eloquent work actually created moments in which communication was lost. The duo Ordo Amoris, for example, erected two tall antennae in a sunny room in one of the city's fortresses, filling the minimal space with the sounds of unheard messages which vibrated around the two poles. Gustavo Romano's ghostly video projection of an X-ray of a hand writing words invisible to the viewer, accompanied by the amplified scratching of the fountain pen, conveyed something of the expressiveness of language precisely by dissolving its physical structures.

Other artists pointedly represented communication in polemical terms. Willem Boshoff used sand to stencil onto the floor words from several newly official South African languages, along with abstruse English '-isms' and '-ologies'. It was a gesture that reversed a usual relationship of dominance by giving speakers of lesser-known languages an advantage over anglophones, who were unlikely to know the words from their own language.

Works that resisted the complicated effects of globalization on local cultures were countered by many that adopted the very signs and practices of trade as their media. Marco Ramírez's signposts juxtaposing arrows pointing to cities around the world with quotes from public personae regarding citizenship, and Diego Toledo's logo-like sticker designs representing conditions of exchange (such as a cluster of arrows forming a virtual globe of pure directionality and no destination), successfully avoided the glibness found in some of the latter. Sid Gomez Hildawa's installation Dream Houses of People who live with their Parents (2000) - a small village of folded cards bearing drawings depicting exactly what the title describes - was also a touching reminder that exchange creates desires which shape personal identity.

More insidiously, the pressures of globalization were also manifest in the shape of the exhibition: the preponderance of installation, conceptual and media-based works suggested that these have effectively displaced studio and craft-based practices as the dominant currency of international art, even within this traditionally exo-centric context. Some works uncomfortably adapted local symbologies to this type of generic internationalism, and in the attempt often seemed to miss any real ability to communicate. On the other hand, the choice to mount a special adjunct exhibition featuring the work of Helio Oiticica was a just recognition of a practice that exemplified independence while insisting radically on human exchange.

Nevertheless, an emphasis on individual experience and personal exchange was apparent, not only in the many performance and live-action works, but in several installations that focused on local action, presence or witnessing. In Graciela Sacco's torch-lit installation the viewer's gesture was the critical agent, creating an uncomfortable sense of complicity and responsibility. As you pointed the torch onto the walls, projecting an image of an aimed gun, your action simultaneously produced fleeting shadows of eyes (victims?) cast by suspended pieces of etched Perspex. Tania Bruguera's work also made history palpable. Battling the sharp odour of sugar cane crushed underfoot, viewers ventured into a tunnel whose darkness was relieved only by an overhead monitor playing news footage of Fidel Castro. Once inside, it took some time before you perceived the live figures poised around you, quietly nursing their naked bodies. In a rather more playful event for public catharsis, Gustavo Artigas lent out polystyrene toy airplanes and headset radios tuned to a pirate radio station broadcasting cockpit recordings from air disasters.

Official shows inevitably provoke unofficial local responses, and here it is worth mentioning two alternative events. For 'Esta es tu casa Vicenta' (This is your house Vicenta), a group of Cuban artists borrowed a private house. Personal exchanges with the resident of the house were integral to experiencing the show. 'Extra Muros' was a series of interventions into public and non-institutional spaces organised by expatriate Taiyana Pimentel. Negotiating the real living conditions of the city - in some cases despite censorship - both events may have been more effective than the official biennial in pinpointing the problems of communication as they pertain to Havana.

According to some rumours, this may be the final installment of the Havana Biennial. Should this prove true, the emphasis on local action will have been an ironic end to an institution that has consciously championed art from the non-Western world. At yet another forum on the future of biennials, director Nelson Herrera Ysla claimed that the organizers no longer needed to distinguish between centre and periphery. Given that the exhibition (its scope now expanded to include the US and Europe) clearly wished to approximate any other international megashow, it seems that they feel their mandate has become redundant. Yet, this fact also confirms the very need for a new model to represent non-dominant practices and to speak to, and of, the difficult conditions of places such as Havana. That is, the complicated conditions affecting local expression that spawned the theme of this show are also the ones this underfunded biennial must address as it decides how - and whether - to reinvent itself.