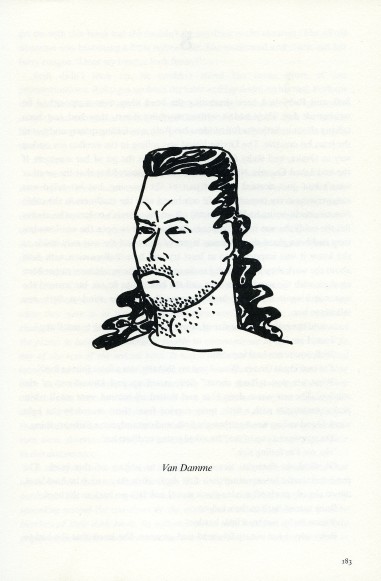 Just when I thought I had Heather and Ivan Morison pigeonholed as ecologically conscientious artists, they go and write a science fiction romp peppered with gratuitous gore and buggery. Rather than a confusion of intent, though, the novel Divine Vessel (2003) clarifies their methodology. Through role-playing and self-conscious parody they probe the possibility of authenticity when making art, reflexively and heuristically redefining their practice with each undertaking.

The Morisons are perhaps best known for their series of text postcards sent from around the world. A card may disseminate a narrative teaser – for instance, from the Carpathian Mountains in Transylvania: ‘Heather Morison is dreadfully afraid. Ivan said she was safe with him, but he is the reason she has ventured so far.’ Or it may simply relate a list of fungi spotted one summer in New Zealand. The mail art project began in 2001, when Ivan took on an allotment in Edgbaston, Birmingham, and sent out regular updates on crop yields, the state of the tubers, insect life and so on. The texts are ciphers for, and metonymic transmissions of, the art work, which consists more in the invisible labour of the artists than in its physical outcome – whether a garden or an interview or a series of images.

In essence, the Morisons’ practice is performative; they use social personae to investigate the construction of self, from national identity to the meaning of hobbies. So far their portfolio of pastimes has included floristry, kite flying, tree fanaticism, anthropology and skywriting. Many of their projects adopt the empirical methods of the amateur enthusiast: they collect and collate, observe and interview. These processes tautologically accrue into the observation and collection of facets of the artists themselves – a reflection of the notion that the experimenter always influences the experiment.

The Morisons use cultural shorthand to survey the array of human endeavours and their impact on the natural world. Starmaker (2005), for example, entangles the realms of natural and cultural history with science fiction so that we can appreciate the oddities of both. A medium-format slide-show of images ­– including dioramas in the American Museum of Natural History, rose farming in Ecuador, Dutch tulip fields, container ships and the coastline of the UK – is accompanied by field recordings and electronic sounds sampled from science fiction movies. The Morisons’ brief was to create a pictorial survey of the Earth as if made by an alien, to consider how the familiar might be understood by an outsider and thereby to re-evaluate cultural clichés.

Conflating an art-historical genre with modern technology, a series of large, luscious photographs revisit 17th-century Dutch still-life painting. Cut flowers are almost bursting with pulchritude, while the flesh of a wood pigeon, a fish and a pig’s head are woozy with gaminess. Here the artists are credited as ‘Mr & Mrs Ivan Morison’, adopting the outmoded nomenclature to echo the era of the still-life genre. Their apparent schizophrenia may seem ironic or parodic, but the Morisons are emphatic that they are not adopting personae or drawing caricatures of types. It is more a case of teasing out and exaggerating certain propensities in themselves: ‘we conceive of and distribute an image of ourselves, but then move towards it, become it.’ They begin by adopting the role of naive but enthusiastic amateurs in the hope of making interesting work about – in the case of the gardening piece, for instance – thwarted attempts at creation. As time went on, a shift of focus occurred when the work was absorbed into ‘real life’: Ivan’s self-perception changed from performing the role of a gardener from the perspective of an artist to gardening for the sake of gardening.

Such naive authenticity is often marked by fallibility, as human foibles infect the contrived façade. Divine Vessel, for instance, is a great first stab at a novel, especially considering it was written during a four-week journey on a cargo ship from Shanghai to Auckland. Invention and suspense are sustained, although the plot is ridiculous even by B-movie standards. One science fiction fan responded to a passage in which aliens inhabiting the bodies of rabbits (which are like flight suits worn when operating human bodies from the inside – it takes some explaining) fall to Earth by declaring: ‘it was at this point that I would have normally thrown the book across the room.’ The book is riddled with imperfections, and, let’s face it, real science fiction exists in abundance and brilliance enough. But for the Morisons the emphasis is less on the authority of the artefact than on its formulation and dissemination. Art often shakily approximates the machined products of commercial enterprise, but the efforts of amateurs often proffer more sympathetic and productive models.