Here, There and Everywhere

Melik Ohanian’s aim to ‘question the operative mode of the exhibition’ is apparent in his complex, multimedia project

When Melik Ohanian and I met up in his Paris studio in late summer, he was concentrating on preparations for his exhibition ‘From the Voice to the Hand’, which was due to open in mid-September in 15 different venues in and around Paris. The origins of this project, which Ohanian refers to as ‘an ensemble of co-existing exhibitions that unfurl, within the same timeframe, on the scale of the city’1, were two nearly simultaneous invitations from the urban art centre Frac Ile-de-France/Le Plateau, which occupies the ground floor of a Paris high-rise, and from the Abbaye de Maubuisson, a 13th-century Cistercian abbey some 30 kilometres from Paris. Ohanian exhibits widely internationally, and less often locally, so the French artist decided to use the two initial invitations as an opportunity to create a network between numerous disparate sites and institutions as a means of re-articulating existing works, producing new ones and unveiling public commissions. Performances, film-screenings, a radio show, a website and presentations in galleries and at the FIAC art fair complete the programme. In the project’s press release and press conference, and during the course of our conversation, Ohanian described ‘From the Voice to the Hand’ as a way to ‘question the operative mode of the exhibition’ and to ‘consider the multiplicity of time alongside the singularity of spaces’.

While doing so, ‘From the Voice to the Hand’ provides an overview of Ohanian’s multimedia oeuvre and its concerns; one could even say it enacts them. His philosophical inquisitiveness is materialized in 10,000 Letters (2008), based on audio recordings of Jean-Luc Godard, Henri Bergson, Gilles Deleuze, Antonio Negri and other theorists, whose words are reduced to cast-plaster letters dispersed in groups throughout the space of Le Plateau. He continues his ongoing investigation of the social function of communal spaces in a specially commissioned gigantic hammock (El Agua de Niebla, Water of Fog, 2008), spanning the grange at the Abbaye de Maubuisson, and a pitch for Cosmoball – a kind of football-in-the-round game he has invented, which will be played on site. Works from museum collections, such as ‘Selected Recordings’, a wilfully ambiguous, undated series of photographs, Peripherical Communities, Dakar (2005), a context-specific, adaptable installation dedicated to sound and video tapings of slam poetry, and his interactive, text-based installation Slow Motion: From Slave to Valse (2003) are shown respectively at the MAC/VAL Contemporary Art Museum, the Pompidou Centre and the National Immigration Museum.

It is no revelation of mine that Ohanian’s work displays a singular obsession with the physical, philosophical, experiential and cinematic coordinates of space and time.2 Time’s passage is measured in Trouble Time(s) (2007), a mammoth wall clock whose face is covered with frosted glass; Second Time (2008), which counts time in seconds rather than hours; and Relative Time Mars Clock model # FVTH 01 (2008), based on the time of Mars’ rotation, which lasts 24 hours and 39 seconds. In turn, time as a motivation for competition is the source of an early work, At Late (1998), for which Ohanian asked three athletes to race against a spatial stopwatch – that of 16 mm film stock cropped to the length of the duration of their own personal records. Suspense builds as the runners speed around the indoor track while the metric length of the reel counts down in the upper-right-hand corner of the image, cutting off regardless of the athletes’ proximity to the finish line.

By contrast, Seven Minutes Before (2004), shown at the French Pavilion of the São Paolo Biennial in 2004, uses vivid cinematographic spatialization to deconstruct any notion that linear sequences of chronometric time structure individual and social experience. This remarkable installation, whose horizontal seven-screen display arrests and fragments the viewer’s attention, comprises seven different continuous-take perspectives on varied activities occurring simultaneously in a confined geographical area over the same 21-minute period. According to Ohanian, Seven Minutes Before, with its focus on spatial–temporal singularity and multiplicity, and its pendant work Seven Minutes Before Partition (2004), a map and a film that complimentarily situate and retrace the seven camera trajectories of the original work, serves as the conceptual and formal key to the structure of ‘From the Voice to the Hand’ – an attempt to translate this cinematic strategy into a concrete, living and bounded space and time.

Set in the ruggedly beautiful Vercors mountains in the French Alps, the seven films of Seven Minutes Before share a narrative beginning and converge on a single end. Each opens with a voice-over account of the inexplicable death of a herd of horses, their broken corpses found at the bottom of a ravine after a storm, and each culminates in two accidents: a collision between a motorbike and a truck, and an explosion that destroys a camper van parked nearby.

Between these parenthetical incidents, one true and the others staged, we see simultaneously across the seven screens: the slam poet Jean Gomis reciting verse around a bonfire in the ruins of a stone building; a miniature version of Robert Smithson’s Spiral Jetty (1970) and hand-built architectural models, including Gordon Matta-Clark’s split house (Splitting, 1974), erected in a stream; a Japanese woman (musician Etsuko Chida) playing a Koto; an Armenian man (musician Gaguik Mouradian) dancing on an abandoned strip of country road; a growling caged wolf; and a falcon perched on a pole in the middle of a field. In the penumbra, garlands of lights hang from trees or lie in green fields, like fallen stars on earthly cushions. Music, voices and the sounds of nature merge in the multi-layered, poetic and plaintive soundtrack. Montage plays no role in the individual films, and one can only piece together, as best one can, in the time one has and the space before the screens, a partial sense of what is represented.

In a 2004 article devoted to Ohanian’s work, Nicolas Bourriaud observed the way ‘the duration of the exhibition and the protocols of common time’ have become central to a whole range of artistic practices that pose the question: ‘How does the time of the exhibition of art works link to social time?’3 Ohanian replies by reminding us that spaces are also places, and that these are multi-dimensionally cultural and social, embodied, inhabited and occupied. In some respects his work seems to echo the words of philosopher Edward S. Casey, who counters the modern and post-modern primacy of time and space over place, by asserting that ‘time and space, rather than existing before place and independently of each other, both inhere in place to start with’.4

Perception is always situated in Ohanian’s work. The interactive installations he designs to house or screen his films, such as the circle of suspended metallic monitors of Peripherical Communities, Seoul (2002) or the curved-concrete dual-sided seating station of Freezing Film (2002), evoke places like the agora or the skate park. In Island of an Island (1998–2001), Ohanian renders the ‘virgin territory’ of Surtsey Island, which emerged from a volcanic eruption off the coast of Iceland in the late 1960s, in three dimensions through 35 mm footage occupying three walls, a floor patterned with lights shaped like a flower found on the island, and several convex mirrors. He gives Surtsey Island a room of its own. One cannot land there: it is a nature reserve open to handful of scientists and has recently been listed as a UNESCO heritage site. But, thanks to Ohanian, one can get a sense of it as a place.

Casey deems the ‘here and the there, the near and the far’ to be the most ‘pervasive parameters of place’5, Ohanian, whose grandfathers fled Armenia for Marseilles in the 1920s, nudges at those parameters in You’re mY destinY (2003), the diary of a failed quest to find his homonyms living in New York and Buenos Aires for an exhibition at the Atlanta College of Art, which he abandoned for political reasons when the USA declared war on Iraq. Similarly, when he filmed the deserted streets of the Liverpool docklands during a prolonged dockworkers’ strike and gave voice to the strikers’ demands in White Wall Travelling (1997), or distributed close-up shots of the hands of unemployed Armenian men across nine monitors on the gallery floor (The Hand, 2002), or even when he showed Peter Watkins’ long-banned Punishment Park (1971) in the Californian desert in which it was filmed, without a screen so that the beam of light thrusts itself into the void of growing darkness (Invisible Film, 2005), he was hardly motivated by the cardinal directions or spatial orientations of locations. He was concerned with the sensorial, temporal, social and political parameters of those places and what they represent for subjects and communities living in them. These, too, are arguably what he attempted to capture when he filmed that delimited territory of the Vercors region in Seven Minutes Before and in his extended spatial–temporal exhibition experiment, ‘From the Voice to the Hand’.

It is naturally tempting, though likely too facile, to interpret Ohanian’s focus on time, space and place as a lingering symptom of dislocation linked to a family history of exile and to the purported confusion of these categories in our globalized present. As an Object AK 47 version #00 (2008), a glass Kalachnikov rifle he hopes curators will ship in perpetuity between exhibitions to which he has not been officially invited (thus provoking its near-certain destruction) seems to comment on the plight of the contemporary artist who jets from one gallery to the next to install art works, attend some parties, then pack up and leave. Likewise, his Datcha project (2005–ongoing), a residency devoted to unproductivity that he has established in a house in the Armenian countryside, seems to offer a Bartleby-esque antidote to at least one form of alienation. These works can be read as quite context-specific to the pressures of professionalization in the art world. Yet, on the whole, there is something less explicit, so as not to say universal, and more deeply reflexive at issue in Ohanian’s efforts to grasp through multiple forms of representation where we are, when we are, here, there and now. 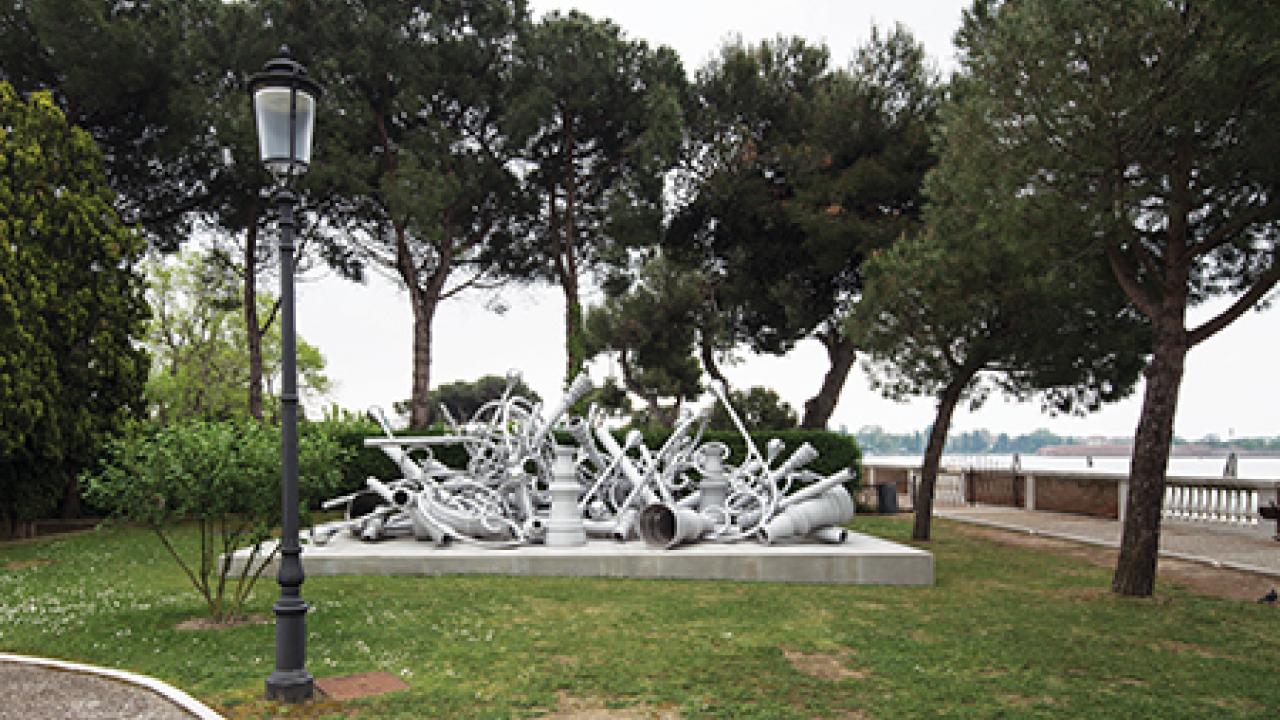 Reviews
Pavilions of Turkey & the Republic of Armenia