I do not want to paint music 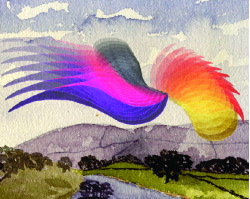 The realm of the senses is a far bigger empire for the synaesthesia sufferer than it is for those of us whose synapses aren't cross-wired.

In tasting shapes, hearing colours or smelling sounds perceptual logic is riven with ambiguity. Yet, as the gliding ballet and sonic geometry of Katy Dove's animations show, these confusions can sometimes render oblique relations curiously transparent.

Anchored to the visual field, sound is essentially part of a chain of cause and effect; it invariably involves tangible objects. A musical instrument produces a note. Car engines rev with a growl. A tree falls with a crash. Cinema replicates this, and film's basic ontology of change and movement underscores such causal logic, with one exception - music. A film score is by and large divorced from the action on screen. The music floats on top, conditioning our responses like an invisible marionettist. Strangely enough, we don't think this odd, although perhaps qualities in Dove's films suggest reasons why.

There is little the eye can see in Motorhead (2002) to suggest any forms we might recognise. Brightly coloured anamorphic shapes hover across the picture plane, arranging themselves into larger groups, like primitive cell organisms dividing and multiplying. Yet their activities seem to be inextricably linked to the digital sounds we're hearing. A pulse, like a submarine sonar, marks out a tempo at which the shapes perform their dance. Every so often, a harsh metallic buzzing sound brings to life a posy of thorny forms. A travelling family of crescents wend their way across the screen during a musical lull, before kick-starting the pulse again by interlocking in satisfying unison. This relationship between visual abstraction, colour and sound has a curious effect. Dove's film encourages an anthropomorphism of line, form and chromatic development, rather than one that projects character onto pre-existent objects or creatures. Why do these shapes group, disperse and regroup? Why do some only exist when a sound is heard? Are they parts calculating a whole? Rather than fly, swoop and soar according to some internal logic or reason, they seem to meander instinctively.

Occasionally, Dove's animations admit the outside world into their otherwise hermetic universe. Melodia (2002) floats elegant curves and spokes around a pastoral watercolour landscape painted by the artist's grandfather. At times the forms seem to inhabit the landscape itself, taking cues for their movement from trees and hilltops. For the most part, they exist on a plane of their own somewhere between the surface of the watercolour and the projection screen, like a jittery chorus passing commentary on the action in the world below. You (2003) remains visually abstract, yet the sound of tropical birdsong and a voice enunciating a mantra of the word 'you' ties the animation to off-screen activity. These works describe an hypnagogic ambiguity and, like the best films, enact a deliquescence between dream and reality.

With the exception of Motorhead, which was scored by Glaswegian band Devotone, Dove writes the soundtracks to all her films. Her music attempts to shift the synthetic noise of digitally generated sounds into an altogether warmer, fuzzier register, one that is closer to her visual vocabulary of the hand drawn and computer animated. Just as jazz was used as an easy shorthand to describe action painting, or Steve Reich and Philip Glass found Minimalist sculpture a suitable visual analogue to their compositions, Dove's animations solicit musical analogy as a way of pulling the solipsism of her kinetic drawings into the realm of shared experience and conversation. Like John Cage or Cornelius Cardew's graphic scores, the films describe and give corporeal form to disembodied sound waves.

Film was once regarded as being a bastardized form, because it functions through the mutual interdependence of writing, performance, photography and music. The father of film theory, Rudolf Arnheim, was sceptical about film's dependence on sound after the advent of the talking picture. He felt that it had lost any chance of becoming an art in its own right when words were spoken from the mouths of silver screen matinee idols. In relinquishing its limitations - absence of sound, lack of colour or three-dimensional depth - film had given itself up to the demands of narrative literary conventions. 'Films', Arnheim wrote, 'are still most genuinely effective when they rely on the basic properties of the visual medium.' On the other hand, as Stuart Morgan wrote of criticism's dependence on other art forms, 'we don't despise ballet because it needs music.' Arnheim began to develop his theories during the 1920s and '30s, around the same time artists such as Viking Eggeling, Oskar Fischinger and Len Lye were composing their pioneering abstract animations. Dove's compositions - a contemporary echo of those early 20th-century experiments - find strength in impurity, as if searching for a way to reconcile themselves with the theorist's interest in film's quintessential qualities.

Arnheim's training was in psychology, studying at the University of Berlin's Psychology Institute under Max Wertheimer and Wolfgang Köhler, who were at that time developing gestalt theory. The department was housed in the old Imperial Palace of the deposed Kaiser Wilhelm II, where clinical tests and experiments were carried out amongst the grand fittings and baroque murals still in place in the old seat of power. It's somewhat tempting to imagine the young Arnheim working amidst the florid statuary, delicate patterning and Prussian splendour of the palace, a magic lantern of static elements combining to form a gestalt landscape of experience in which to study the senses. It's equally tempting to envisage Dove's films quietly playing out in a corner of this laboratory, wired to someone's brain like a cranky electroencephalograph. The scientists observe. They scratch their heads and furrow their brows. Unable, as individuals, to quite decipher its inscrutable results, they are just parts calculating the whole.