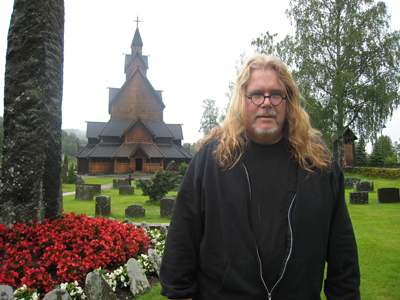 In 1973, around the time I left high school, I saw a photo from Chris Burden’s Shoot (1971). It was the first time I’d heard of Performance art. That piece changed my whole outlook on life.

What image keeps you company in the space where you work?

A poster for the film The Man Who Shot Liberty Valance (with one ‘l’). My favourite line is when Liberty (Lee Marvin) knocks a plate of meat from James Stewart’s hands. John Wayne, sitting at a table in the restaurant, challenges Marvin and belts out, ‘That’s my steak, Valance. You pick it up.’ I think of that line often when I am working.

What film most influenced you?

The Loved One (1965), a film satirizing the LA funeral industry. During my 1978 performance, Blinky the Friendly Hen, in which I buried a frozen supermarket chicken at the Los Angeles Pet Cemetery, I unconsciously spoke a line from the movie: ‘I have a bird to be buried.’

What are you reading now?

Christ: A Crisis in the Life of God (2001) by Jack Miles, which reveals just how radical Jesus really was. I’ve not finished the book yet, so I don’t know how it ends.

What are you listening to?

As a teenager, I listened to Procol Harum. When I was in my 20s, I was into punk rock. In the 1990s I was into Peter Gabriel, Kate Bush and, finally, Daniel Johnston. Then at some point I stopped hearing anything I liked. I blame it on Postmodernism. Art became a reference to other art. Music became an endless rehashing of rock. I am always looking for that ‘new sound’ – if you hear of anything, please let me know!

Viking woodcarving. I’ve just returned from a trip to Norway researching stave churches, carved wooden storehouses and rosemaling homes. I’m thinking of making some kind of bastardized stave church on a sled and dragging it around in the snow.

The West’s concept of war. I’ve always wanted to start my own War Department. If you ask a diplomat how to wage war, he’d want to use diplomacy. If you ask a plumber, he’d want to use pipes. If you ask the military-industrial complex, they’d of course want to use bombs, guns and tanks. I propose that if we go to war with a country, we should overload them with products: junk food, new cars, tons of electronic gadgets. The people themselves will squelch any dissent, as they’ll want to keep getting all that stuff.

I live in the San Fernando Valley, Los Angeles. By the look of it, the Valley has no history, just sprawling housing tracts and blighted strip malls. Almost all of the historical architecture has been torn down. At one time, it was full of historically significant buildings, including Native American villages, haciendas and ranch houses from its early agricultural period. As Dave Hickey once said, the Valley is the place ‘where authenticity comes to die’.

When I was young, I used to do these activities that I had no name for – maybe they’d be called pranks. After high school, I learned about Conceptual art, which seemed to be the closest thing to what I was doing, so I relabeled my activities ‘art’, defining myself as an ‘artist’ rather than a ‘crackpot’. The only thing I can imagine doing differently would be to continue the same actions but take away the label of ‘art’.

Languages other than English.

People enjoy art for one of two reasons: they either like art that they know, or art that they don’t know. I like things I don’t know. When I see art that looks remotely like any other art, I think, ‘What is the point?’ I want to be totally blown away, for something to crack in my brain. The experience I want is so rare that I have almost lost hope of finding it again. Although I must admit that much of the fault is my own, as I have almost stopped trying to look for that perfect experience. When I work with students, I truly like their art, for I find them exempt from my rigid definition of what art is for, and I revel in creativity itself.