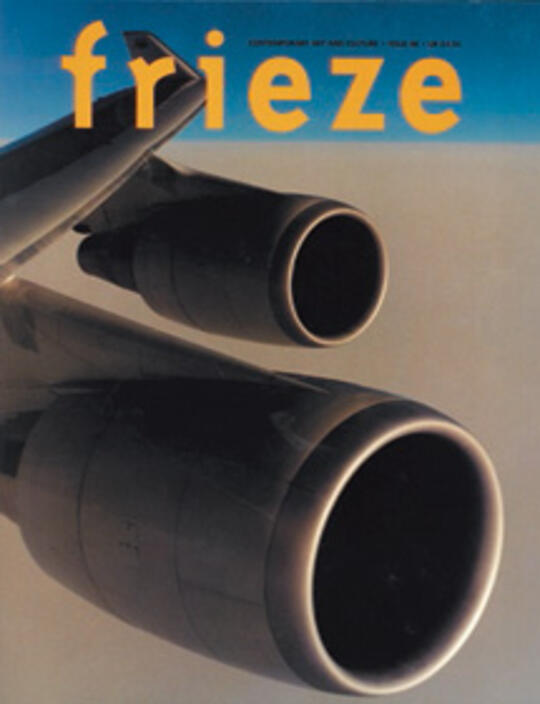 This show of Jorge Pardo and Bob Weber was, in a sense, an historical one, despite the fact that much of the background information was pointedly omitted. That these two artists were close friends, attended classes together and developed their approach to the art-as-design or design-as-art problem in tandem, could not be gleaned simply from the objects on display - to the unsuspecting visitor the gallery looked like a high-end furniture showroom. The artists' story of youthful idealism coming to grips with the exigencies of the marketplace is well known to those who were there - but those who were not were bound to feel somewhat left out. It was precisely this sense of something missing that the show capitalised on in a very particular way, redirecting attention to the specific contingencies of the installation.

A vast ideological gulf separates Pardo's practice from Weber's and this was made manifest in the space between their respective contributions: Pardo's dense configuration of swirled glass lamps having been hung at a height that precisely marked the threshold at which Weber's reconstructed living-room set disappeared from view. This simple but decisive phenomenological ploy denied the possibility of a simultaneous encounter with the work while insisting on the necessity of a comparative reading. Splitting the gallery into upper and lower registers, it invited us to travel between them as though between distinct strata or time zones of production.

In this context, Weber's tables and chairs appeared resolutely artisanal. Idiosyncratically inventive, each one is the result of a focused, almost portrait-like exchange between two pronounced subjectivities. Each is absolutely unique, specifically tailored to suit the needs of its intended recipient - essentially an audience of one. An easy chair on loan from Julian Goldwhite's collection, for instance, was obviously designed to reflect its owner's musical interests, its undulating lines and garish colours resembling nothing so much as an electric guitar.

Elsewhere the stress might be placed on body-type, lifestyle choice, sexual preference or taste. Even if one cannot tell just how these factors are always considered, their motivating presence is evident in the radical differentiation of the finished products and in the histories that mark their surfaces. Clearly these objects have fulfilled their intended purpose. Their flattened pillows, chipped and scratched veneers attest to this fruitful outcome, and in a more general sense, show us how art can succeed by simply reducing its sphere of operations.

Shimmering like a canopy of stars, Pardo's swirled glass lamps seemed all the more pristine. Almost identical at first glance, a prolonged squinting revealed their subtle colours and shapes, a variegation built into the manual process by which the molten glass is coiled. The lamps' play with the aesthetics of a wholly contemporary nostalgia was kept to a minimum so as to deflect artistic considerations into the relationship between the objects as well as between the artist, the viewer, the collector and gallerist. Considered alongside Weber's work, their indifference emerged as the operative principle, a quasi-neutrality that requires our input in order to function as art.

The term 'Jorge Pardo Sculpture' (which is how his studio assistant answers the phone) designates a business as well as a kind of alternative universe, a comprehensive system of objects - lamp, chair, table, boat, pier, house, etc. - that become increasingly indistinguishable from their various 'real life' models, while maintaining a connection to the discourse of art. In effect, it is entirely due to the operative, utilitarian potential of its parts that the work remains, as the artist puts it, 'speculative', and evermore able to reconcile the once incompatible aims of conceptualism with naked commerce. It is worth noting that the lamps were the only thing for sale here, Weber's work having been borrowed from a number of private sources. The question of who was framing who - and to what end - became paramount, but any hope for an easy or definitive answer was swiftly eluded. Likewise, the show did not venture any sort of critical statement on the present place of art in the landscape of capital and commodity. Instead, in the most casual and open-ended sense, it invited one to imagine what it still could be.

That Weber died in 1994 could not help but lend an elegiac tone to the proceedings. One could go on about how this served to throw the fetish-character of Pardo's objects into even sharper relief, but what really stood out was the supreme humility of the gesture by which he ceded way to the work of a lesser-known friend and allowed it, literally, to shine.