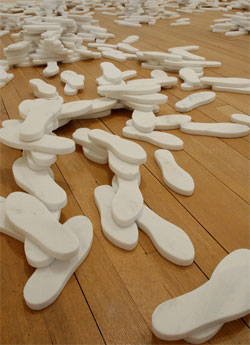 Jose Damasceno’s wry sculptures, installations, photographs and drawings are works that reveal how they came into being. Damasceno lives and works in Rio de Janeiro, and his first UK solo exhibition, ‘INFRAMARKET’, is timely. On display across town at the Barbican is ‘Tropicalia’, a survey demonstrating how Hélio Oiticica’s 1967 eponymous installation gave the revolutionary Brazilian cultural movement its focus. Oiticica’s and Lygia Clark’s participatory sculptures in ‘Tropicalia’ provide ways of reading Damasceno’s own practice and give background context to the work. His art is gentler than that of the Neo-Concretists, a playful way of working with site-specific sculpture that is mellow without feeling restrained.

Step by Step (all works 2006) is the heart of the show, entirely covering the second room’s floor. A dance-step chart normally used to map out the foxtrot or polka is translated into marble footprints carefully scattered across the gallery. Chunky foot-shaped wedges, each about 2 cm thick, are placed close together and piled on top of one another to show a fast-paced dance or a single spot that the dancer would move on for a while. With some of these piled seven or eight high, the sculpture builds up from the floor in sturdy layers. Marble – a classical sculpture and flooring material – becomes both the trace and the plan for a dance that would usually occur on top of it. With his meticulous repetitions he unravels the complex relationships between an object and its material that are otherwise taken for granted.

Known for using unorthodox materials – chess pieces or blackboard erasers, for example – Damasceno has returned to traditional sculptural materials of stone and metal. Can You Hear Me?, a double-headed trumpet, is a conjoined twin of a musical instrument. Two brassy horns face in opposite directions, with the mouthpieces meeting in the middle to form a single tube. The instrument is rendered useless: no air can enter the mouthpiece and no sound can escape.

The impotent trumpet sits in front of Organogram, a diagram made by pressing inked rubber stamps directly onto the wall. The words ‘yesterday’, ‘today’ and ‘tomorrow’ are stamped repeatedly in slightly curved lines, mapping out a round shape on the wall. The points where they meet presumably hint at the present. Literally translated from Portuguese, an organogram is an ‘organizational chart’. However, there’s no obvious organized structure in the wall-piece: rather, carefully controlled and worked-over random patterns. The trails of words form a large shape, nearly five feet high and wide, that vaguely resembles something organic: a rock, a round shell or a big cabbage. Some lines travel inside the shape, making veins that end without warning and little paths that lead nowhere. In previous Organograms Damasceno worked on paper, but here on the wall there are some smudges where he’s pushed the stamp unevenly or caught a finger on a word not yet dry. The result is pleasingly tactile: what seem from a distance like faint and perfectly drawn, flawless lines reveal their making and faults when looked at more closely.

Three works – Gruta (Cave), Garage and O Avaliador (The Assessor) – hung in the third room. Garage shows a desolate landscape extending beyond its frame: a grey brick protrudes from the image, while another sits below on the floor. A photograph is also the starting-point for Gruta, a delicate collage recalling storybook illustration in which a solitary man dwarfed by stalactites watches lights sparking in the distance. Damasceno is concerned with transformation – moving from one form (photography) to another (sculpture, collage) – resulting in a pleasantly delayed realization of how layered his process is.

The artist hints at his methods with the show’s title: while ‘market’ refers to an area of activity, ‘infra’ is used in academic manuscripts to refer a reader to a point later in the text. His works slowly reveal the relationship of forms to materials, giving a quiet nod to his influences and the development of his concepts.