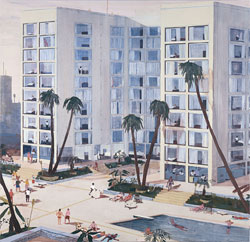 There was an exuberant dynamism to Jules de Balincourt’s new show, ‘This Is Our Town’, that was hard to resist. The work feels unforced, appealingly frenzied. De Balincourt pokes genial fun at his adopted society (he was born in France in 1972 but has lived in the USA since the early 1980s), and his work is graced with a larky pictorial humour. However, with a few happy exceptions, this exhibition showed a lopsided relationship between quite ordinary ideas and extraordinary talent.
De Balincourt’s Crayola-by-way-of-Vegas palette (created by taping off sections, spray-painting or stencilling, scraping and scratching) flaunt protean surfaces, highlighting a mastery of colour and shape. He thrives on detail, embedding his compositions with partially obscured figures and objects, the game-board proportions evocative of Lego and electric train sets. This is particularly true of Insiders and Outsiders (2005), its turreted fortress foregrounded by disreputable-looking young men. The nearest figure, with backpack and hood, peers out from the left-hand corner, scaled to his surroundings to such a distorted degree that the perspective is immediately familiar to model-train enthusiasts.
These odd spatial displacements make for the most compelling work, and the more he strays from strict narrative the better. A large yellow oval with pink grid dominates The Watchtower (2005) its look-outs spun out to the ovoid’s perimeters as though by centrifugal force, the configuration suggesting a pupil-less eye. Similarly unsettling spatial shifts occur in Ambitious New Plans (2005), where the booms of probing, insect-like microphones partition a huge blood-red conference table, its generic negotiators relegated to the edges. The near-abstract elements of both scenes elevate the paintings above the mere visual razzing for which the artist too often settles.
‘This Is Our Town’ includes more overt examples of De Balincourt’s gossamer political engagement, including U.S. World Studies III (2005), a crimson-dominated map of the USA that looks like a child’s luncheonette place mat felted and shrunk, the customary state flowers and birds replaced by corporate contributions to the Republican Party in 2004. The People Who Play and the People Who Pay (2004) has a similar thudding lack of subtlety: the setting a boxy resort hotel, the toiling staff all black, the frolicking vacationers white except for one token person of colour. Sharpshooters atop the hotel and De Balincourt’s consistently excellent worn-out greenery do little more than suggest certain ironies, their effect blunted by a whimsical sweetness.
Far better, and the highlight of the show, was Blind Faith and Tunnel Vision (2005), a bombed-out cityscape with spindly telephone poles (De Balincourt uses these often, to great atmospheric effect), marvellously observed office detritus (reel-to-reel tapes, Eames-style chairs), crumpled street lamps and even a weary pine tree, behind which a plume of gold-dusted smoke rises ominously. The pitch-perfect composition, all its components leaning as if magnetized to the vanishing point, is shot over with a radiating sonic boom of a rainbow. The preternaturally cheerful stripes menace rather than comfort, and the image was the only one here that conveyed the physically unmoored feeling in New York City just after the 2001 World Trade Center attacks: gazing down from the Village, Fifth Avenue seemed simply to vanish into empty space.
De Balincourt’s Personal Survival Doom Buggy (2005), a mixed-media vehicle designed in collaboration with Paul Stec, is described in its accompanying user’s manual as ‘a complete survival pod’. The buggy is occupied by a gas-masked mannequin, the black and silver vehicle tricked out with several red and khaki fuel tanks, two expedition pouches (positioned in the passenger seat, they had a semi-anthropomorphized look), a fortnight’s supply of food and water, several survival outfits, whisky, smokes, cash and toiletries (these last being very chaste, including neither cyanide pills nor a single condom). De Balincourt squanders the subversive opportunities of the manual by allowing it to be a crushingly dull read, the text riddled with clearly unintentional typos. Without scrupulous commitment an obsessive piece such as this falls apart; the artist needed to go full-throttle, but he never released the emergency brake.
Simply making reference to survival, or showing ‘us’ and ‘them’ as a questionable construct, is hardly startling. Such repeated literalness keeps De Balincourt’s work bobbing well above the sinister depths he seeks to plumb. The question as to whether his ideas will catch up with his sophisticated process remains open.