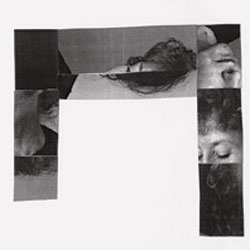 Rebecca West’s novel The Return of the Soldier (1918) describes the events that unfold after a shell-shocked officer arrives home from World War I. He can recall nothing of the previous 15 years; his wife is a stranger, and he also does not recognise his childhood home, which has been remodelled since his marriage. His cousin, who acts as narrator observes that, ‘Strangeness had come into the house and everything was changed by it, even time.’ A similar sense of unease can be found in the recent work of the Glasgow-based artist Kate Davis, who uses domestic objects as a metaphor for social relationships. Her practice explores a succession of subject/object relations, through Surrealist drawings and collages and the inclusion of sculptural pieces that invite the audience to complete the work.
Davis’s ‘Participant’ series (2004), shown recently at Sorcha Dallas in Glasgow, included two pencil drawings and a print of altered domestic objects – bottles and wine glasses with gesturing arms and small misshapen heels. The reading of these drawings was complicated by the addition of an actual stage, which occupied most of the floor space in the small gallery. This platform had previously belonged to local live music venue, the 13th Note, before passing into the hands of Transmission Gallery, where Davis previously served as a committee member. In borrowing it for her exhibition, she was also appropriating the object’s history of bodily impact, something emphasized by coating the wood in a fleshy pink paint.
On the opening night it seemed from outside that some unusually tall people were in attendance, surrounded by crowds of more diminutive guests. Entering the haze of smoke and noise, visitors tripped over the edge of the stage and thus realized the changed contours of the room. This sense of social awkwardness recurred in works being shown, like the pencil drawing Could You Please Should, Please? (2004) – an image of a fallen wine glass with tiny useless arms, crying a pool of wine out onto a table. Visiting the gallery again, when it was empty, ingrained dirt was visible in the ruptured skin of the stage, as was a knothole, which looked at first like someone’s high-heeled shoe had plunged through the wood. The deliberate awkwardness that Davis set in motion would have made such an event entirely possible.
This reflexive dynamic between the viewer and the object was pushed in a more aggressive direction in her more recent exhibition at Transmission. Robert Morris wrote that, ‘Characteristic of a gestalt is that once it is established all the information about it, qua gestalt, is exhausted.’ In viewing ‘The Player’ series (2005) something is experienced of the ‘weak gestalt’ – as the pattern presented by Davis’s configurations of drawings and sculptural pieces remains open to multiple readings. An example of this can also be traced in her series ‘Applicant’ (2004), which recast the discredited aspects of femininity cited in Sylvia Plath’s 1962 poem ‘The Applicant’ as discursive collaged and drawn images, both ‘natural’ and ‘cultural’. Rather than liberating the viewer, these works engender a rather perplexing and odd experience.
Davis’s ‘The Player’ series included a drawing of a boyish woman seemingly asleep on a plate. On the wall beneath the drawing a brutish black plastic steering wheel was installed. Elsewhere, a pencil drawing of two hands emerging from bedclothes was partially obscured by a punch bag, swathed in a white-linen sleeve, a compromised, even irksome ready-made. The uneasy correspondence between the white cloth of the bag and the sheets depicted in the drawing, and the circles of the plate and the steering wheel, set up an implied dependency between states of repose and acts of controlled violence (driving, punching).
Similarly, in The Return of the Soldier, the household objects that the amnesiac character recognises seem to possess an authenticity that he himself lacks. His cousin observes that, ‘Dipping his head he would glance sideways at the old oak panelling; and nearer things he fingered as though sight were not intimate enough a contact, his hand caressed the arm of his chair, because he remembered the black gleam of it, stole out and touched the recollected salt-cellar.’ In this defamiliarised settings the audience will often stumble. In this, Davis’s work presents a corollary of a home from which we have been absent, a home that has become strange. ‘“He’s fallen down those three steps from the hall”, I whispered. “They’re new…”’