BY Carmine Iannaccone in Reviews | 04 APR 01 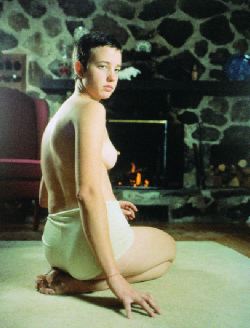 Think, for a moment, of some famous personalities you've seen in the buff. In the 1950s there was Marilyn Monroe stretched out against an expanse of shimmering cloth. Just before John Lennon died in 1980, we saw him naked, hugging a clothed Yoko Ono. More recently it was a very pregnant Demi Moore. As historical images from the mass media, each of these photographs represents not just a shifting tolerance for nudity, but a shifting conception of what nudity means, what comes across as brazen and what, by implication, is considered tame. The fact that the forums for publishing these images have expanded dramatically has also changed the nature of collective perception. The nudes that used to be distributed discreetly on postcards and calendars are of an entirely different species from those one might find in a large-circulation magazine, which differ in turn from what turns up in the tabloids, on cable television, or downloaded from the web.

And yet, the criteria that distinguish these different categories from one another are notoriously fuzzy. There are no hard and fast rules that sort out tastefulness from vulgarity, liberation from exploitation, acceptability from prurience. As images proliferate, the categories and criteria only grow more and more indistinct - but not irrelevant. Viewers are far from blasé about who decides to show some skin, and when. Being photographed unclothed remains as loaded a proposition as ever, perhaps because there's such ambivalence in our society about what it means.

What makes Katy Grannan's portraits compelling - and they are not all nudes, although nudes predominate - is the way she casually suspends her subjects in this semantic no man's land. Unlike the iconic images of nudity, the ones in which a John Lennon, a Yoko Ono and an Annie Leibovitz together use the weight of celebrity to bend an audience's sensibilities, the sitters in Grannan's photographs are not famous. Each of them replied to an advertisement for models that the artist placed in various local newspapers. Each was posed in his or her own home - all more or less middle-class. Instead of glamour, they bring a slightly bruised, idiosyncratic 'realness' to each large-format print that in one way or another grates against all the precedents and invisible standards for how nudity can be framed.

In Untitled (from the Poughkeepsie Journal) (1999), the model kneels at the corner of a carpet in front of a large hearth in which a blurry fire glows softly. It's a familiar set-up. In this setting the almost-nude is meant to function exactly like the fire: an emblem of warmth, risk and delicious sensuality. But with her pierced nose, boyish haircut and funny panties, this particular model rewrites such scripted, soft-focus sexuality, making the whole scenario as stubbornly about herself as it might be about a fantasy focused on a false image. In Pleasant Valley (2000) an invisible wind ruffles the hair of a lithe beauty who looks as if she could have stepped out of a Botticelli landscape, except that she's stepped into a room with shag carpeting, an acoustic tile ceiling and a really ugly couch. The man and woman embracing on the porch of their home at the edge of a forest in Couple, Catskill (2000), might be idealised citizens of a new Arcadia, or they might just be a couple who happen to live at the edge of a forest. The more you study these images, the more empathy you feel for how the sitters enact these awkward negotiations between self-image and media-image that everyone struggles with at one time or another. Admirably, it's a drama that Grannan has engineered without compromising any of her actors' sincerity or integrity. By toying with how the image is set up from start to finish, her portraits don't invert the classical concept of nudas veritas so much as set a new standard for what comprises (and compromises) truthfulness - on the part of both a photographer and a sitter - in the first place.