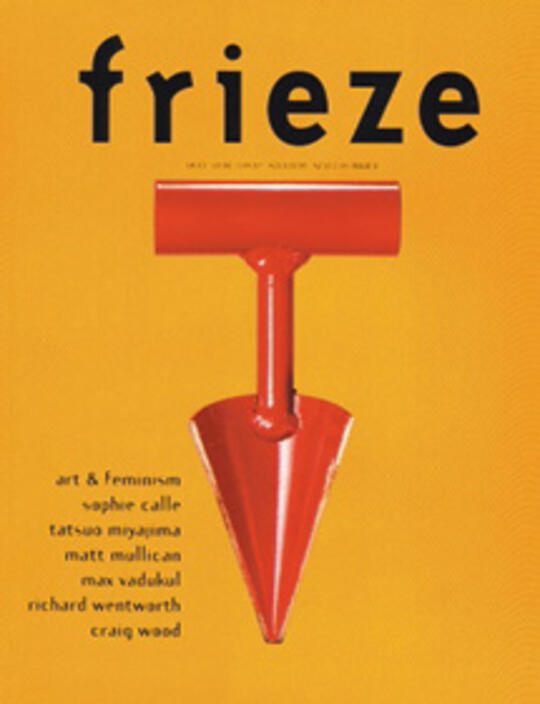 The virtual worlds of Matt Mullican

Matt Mullican makes corporate logos for corporations that don't exist. He diagrams cities in paint. He town-plans the future in a database. He makes a city-scape in granite on the ground. Time and again he has used such walled and schematised cities to intimate private cosmologies and patterns of thought; moving from the real to its symbol, then giving symbols life. In this context his latest work Five into One doesn't come as a surprise, tempting us, as it does, inside the purely ideographic universe of virtual reality. This, at last, as Mullican says is 'a landscape of signs... of meaning without form...'

Five into One takes us into five interconnected worlds, some abstract configurations of colour and shape, others depthless versions of real environments - suburban toy-towns, domestic interiors and fields. The VR goggles place two slightly different views of the same scene next to ones eyes to achieve a stereoscopic 3-D effect; look around and the programme adjusts your view accordingly, sit down and you're sitting down. More substantial movement takes place using joystick controls.

Mullican's world is like our own world simplified by a sudden neon snowfall, an environment where as symbolic non-beings we leave neither track nor trace and in which the previous presence of other beings is not apparent. Seeing someone explore this new space is a curious spectator sport, akin to watching sleepwalkers, only here the moves and facial expressions of the explorer can be read against the twin screen playback of what she or he is seeing. First-time explorers clutch the joystick and wobble slightly, mouths opening in wonder, and make unnecessary compensatory balancing movements as they approach virtual cliff-tops. It's astounding how vulnerable the body seems when the gap between biology and consciousness is opened up. Indeed there's a neat myth-like equation which means that the senses privileged in the VR world (sight and its attendant spatial orientation) are simultaneously denied one in the real world - looking down on a cluster of virtual buildings one is quite likely to bump into a real wall.

Watching Mullican himself explore Five into One however, there is no such clumsiness. It's like being shown round a house by the proud new designer/owner. 'Next time we do this the resolution will be five times higher...' he promises, eyes blanked out by the goggles, explaining how the more complex sections of the work place such demands on its hardware that the visuals are jerky and uneven. 'Now I'm on the shelf...' he says later, crawling on his hands and knees and exploring the contents of a house inside World Three of the work, 'I always wondered what it felt like to be on the shelf...'

Referring back to his previous urban blueprints Five into One makes the link between the spatial and the conceptual so strongly that after it even real cities seem more like states of mind - some are full of information and take time, whilst others are to be sped through or flown right over. It's pertinent here that where commercial uses of VR are pitched towards training, one's presence in Mullican's work is denied concrete purpose save the contemplation of subjectivity. Here we are sole subject and creator for the duration; the first person in the forgotten city or the last person on earth. There's something decidedly addictive about Five into One, about the ability to be in such a timeless, deserted zone and about the perception it brings of the gap between our consciousness and our biology.

There's something haunting too about its constant movement between representation and abstraction - anyone who's ever wanted to steer an arcade-game race car off into the lurid expanse of grass beside the track won't be surprised that the most astonishing perspective on Five into One was provided by retreating from it. The joy here is that there's nothing in the programme to stop you from crossing the line and hitting what Mullican calls Blanksville by flying off into the gray void of Sky, leaving the City and its polygon cloud further and further and further behind until it's a mere pixel on the horizon. Perhaps the strength of the work is its ability to ensure that the joys of such solipsism extend beyond mere purpose or desire into a meditative boundlessness.

Finally it seems to me that the medium of virtual reality offers two inherent challenges to traditional art practice which Mullican seems happy, in Five into One, to take on board. First, the virtual world, through its lack of tangible physicality, questions the value of concrete existence in art. There's no object here after all, just a concept stored as number in a stack of new machines.

Second and more importantly virtual reality goes a long way towards abolishing the frame. With freedom of movement in a huge, and potentially limitless, invented space the viewer now has substantial responsibility for deciding which aspects of the landscape or environment will be looked at and from which perspectives. Foreground for one viewer/explorer will be background for another. Speaking of the future Mullican has big plans to push this aspect further in later versions of the work: 'This is just a sketch of what's possible... I want to make it interactive, I want to be able to go in that house and move the furniture out there into the street...'