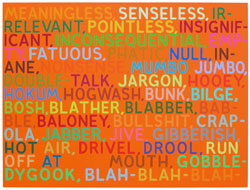 Born in Pittsburgh in 1940, Mel Bochner moved to New York in 1964, where he began making work and writing criticism for Arts Magazine and Artforum. A member of the first generation of Conceptual artists, with his sculpture, drawing and photography he explored the opacity of language and questioned the authority of knowledge over perception. From the mid-1970s these inquiries were pursued within the medium of painting. Recently the Musée d’Art Moderne et Contemporain, Geneva published Bochner’s early writings, and he has designed the Carnegie Mellon University Garden in Pittsburgh, which will open next year. Some of Bochner’s 1966 ‘word portraits’ of friends such as Eva Hesse, Sol LeWitt and Robert Smithson were included in the Los Angeles’ MoCA show ‘A Minimal Future’ this summer, while his recent paintings – whose words are similarly sourced from Roget’s Thesaurus – featured in the Whitney Biennial earlier this year.