BY Amy Sherlock AND Laura Owens in Interviews | 27 OCT 21

Laura Owens on What We Get Wrong about Van Gogh

How do you solve a problem like Van Gogh? As a contemporary artist, can you make a show in an institution which bears that most familiar of names without gilding his myth? In Arles, Laura Owens's delicious, brilliant response has been to smother him. On the exhibition’s first floor, seven Van Gogh paintings, on loan from various international institutions, are hung against a visually overwhelming floor-to-ceiling wallpaper, dense with graphic motifs, luminous colour and trompe l’oeil detail. (One room seems to have been covered with googly-eyed stickers from a child’s activity book; in another, a facsimile of a handwritten note from Owens to a friend appears to have been pinned to the wall.)

The wallpaper patterns are drawn from early 20th-century designs by a little-known British designer, Winifred How, and an unknown French artist. That they are lost to art history while the Dutchman looms so large is an object lesson in the vagaries of fame (and a reminder that Van Gogh was never the naïf outsider so often portrayed). Safely enclosed by their elaborately gilded frames, Van Gogh’s paintings seem a little prim, a little stiff: just one more detail to draw the eye in Owens’s glorious all-over composition. As with the camouflaged protagonist of his Giant Peacock Moth (1889), your attention might initially glide right over them.

This exhibition invites a diffuse kind of looking – experienced on the peripheries of vision; sensed, not just seen – as well as rewarding an intense focus on the thing in front of you. (Look closely to see the shimmer of iridescent pigments in the screen-printed wallpaper; observe how the efflorescent brushstrokes of Van Gogh’s Hospital at Saint-Rémy (1889) are echoed in the trees of the Japanese-style print that surrounds the frame.) Like all the best of Owens’s art – and her remarkable Untitled (1997) painting of seagulls, which opens this show, surely remains near the top of that list – it acts on you sensuously and cerebrally; its tricks of perception are pleasantly itchy, the visual equivalent of an ASMR video. She’s asking us to look and think whilst thinking about looking. She’s nudging us to look differently. Perhaps no one needs that more than Van Gogh.

Having moved to Arles to work on the show in early 2020, Owens found herself locked down in the city during the pandemic and continues to be based there. In her studio around the corner from the Fondation, we discussed how the exhibition came about and why Van Gogh casts a long shadow over the idea of ‘the artist’. 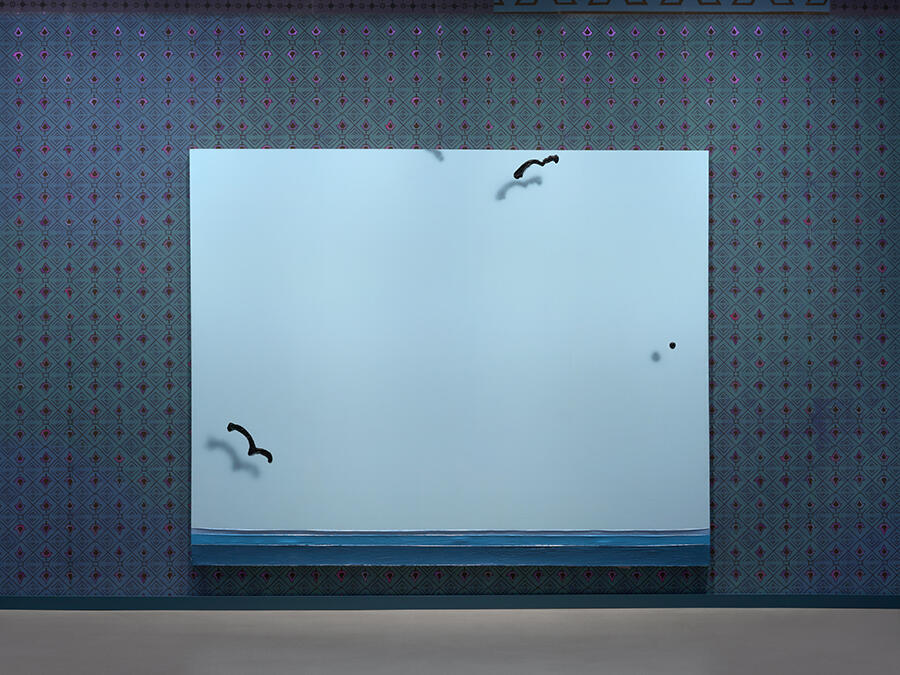 Amy Sherlock: What does it mean to be billed alongside Vincent van Gogh as a painter – particularly as a woman artist – in 2021?

Laura Owen: Van Gogh is someone who I have looked at since I was a kid, like lots of artists. There are some really good Van Goghs in Cleveland, where I grew up. But he is also someone who has fallen out of fashion a number of times and is not exactly a hip person to be showing with. Arguably, he has become the most famous artist in the world: more people have seen an immersive Van Gogh experience in 2021 than saw Taylor Swift’s ‘Reputation’ tour in 2018, which I find remarkable. He’s become a stand-in for ‘The Artist’ in the popular imagination. Griselda Pollock has written extensively about this. I think it’s why she is obsessed with Van Gogh: because she sees the myth that has been created around him as one of the reasons that the terms ‘woman’ and ‘artist’ have become so severed.

There are several myths layered on top of one another: the persecuted person, the martyr, the crazy man, the childlike genius. These things don’t exactly align with his letters – he was one of the best-read artists of the early 20th century – or the fact that he was an art dealer. We make the mistake of conflating the myth of Van Gogh the artist with a human being, as we do with Jesus. 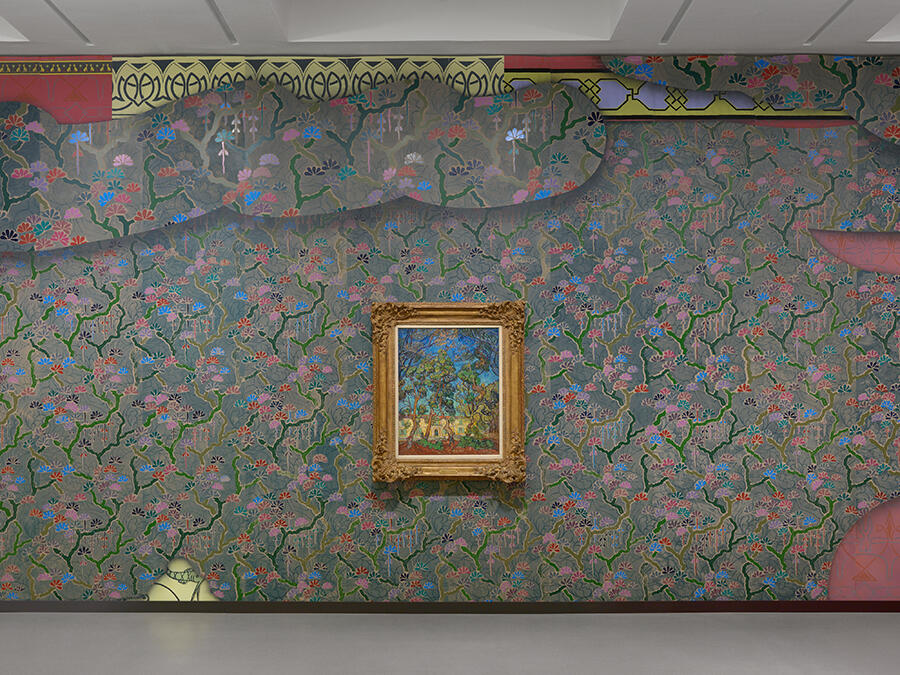 AS: In the show, you have created an immersive mise-en-scène for seven Van Gogh paintings, surrounding them with wallpaper. By producing this other space, this other surface, are you trying to sever the connection between the myth and the canvases themselves?

LO: One of the questions that Mark Godfrey [one of the show’s curators] and I asked at the outset was: how can we get people to look at a Van Gogh painting and just see the painting? Is that even possible? I wanted people to see him as just another artist who made another painting. The way I found to do that was to put on an equal plane in the exhibition a relatively obscure female British artist, named Winifred How, whose college portfolio from the late 1910s I bought at a book fair in Los Angeles, and designs from a portfolio I found by an anonymous French artist, who I also assumed was a woman. The anonymity of these artists is a counterpoint to the myth of Van Gogh. 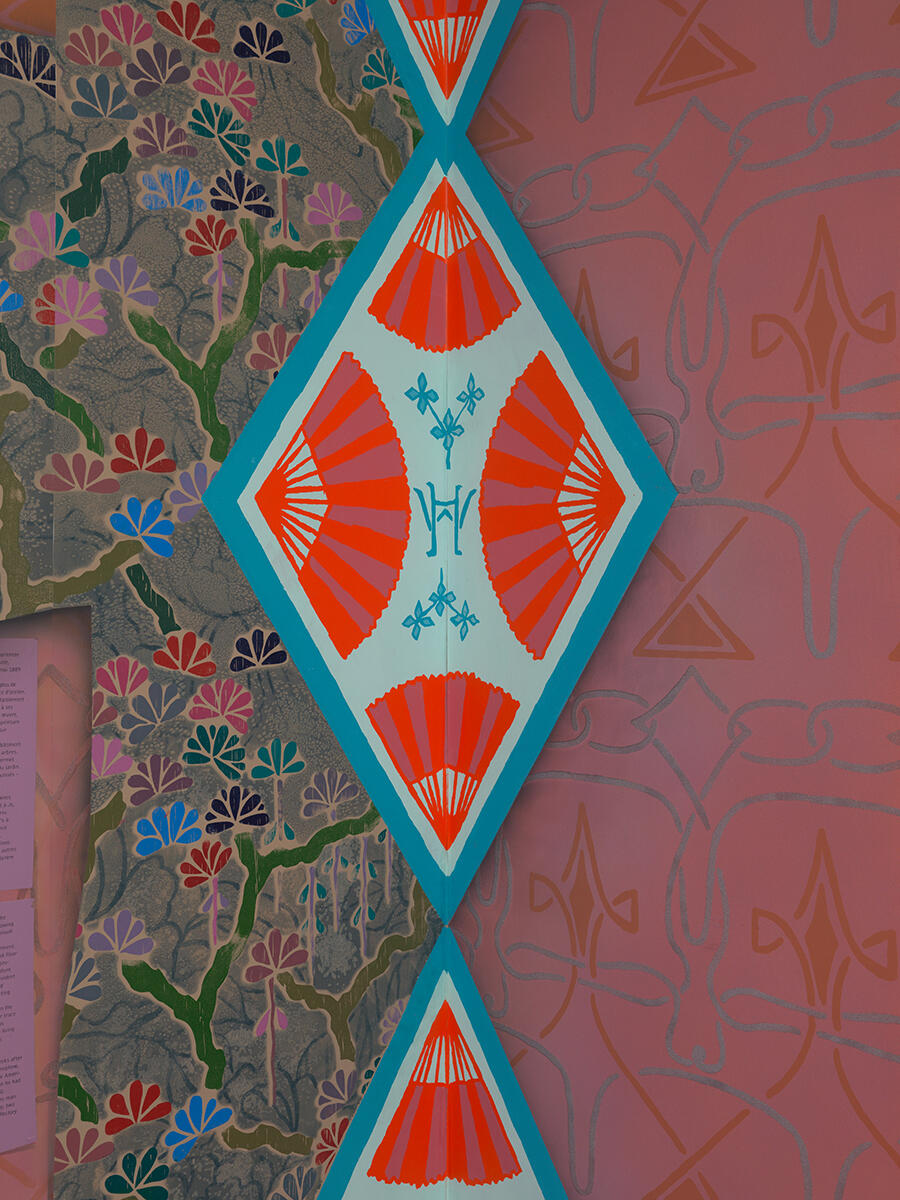 AS: When I walked into the show, I felt like I was walking into a Laura Owens painting – the motifs on the walls seem so contemporary. It did not occur to me until I saw How’s portfolio in a vitrine upstairs that the wallpaper directly transposes her designs. There is one in particular, of shells, that feels like a Takashi Murakami superflat painting from the early 2000s. When I saw the dates written on her portfolio – ’18, ’19 – I had a moment of brain slippage: I thought maybe they were from 2019 and that How, the forgotten British art-nouveau designer, was a ruse, one of the show’s sleights of hand.

LO: In my work, I am always asking: ‘Where is the painting?’ or ‘When is the painting?’ It goes back to Seth Price’s text ‘Dispersion’ (2016), in which he says the one place that artists have left to work is stretching out what language does and showing where the linguistic categories we use cease to be functional. I want to ask what ‘painting’ means and what ‘craft’ means. When I go to the museum, I go to the textile department and I’m seeing paintings. In this show, the wallpaper is the ground and the painting: I’m trying to move the boundaries of familiar categories in your linguistic mind through your visual perception. When you are looking at the Van Gogh, you are also looking at something I made from something someone else made. 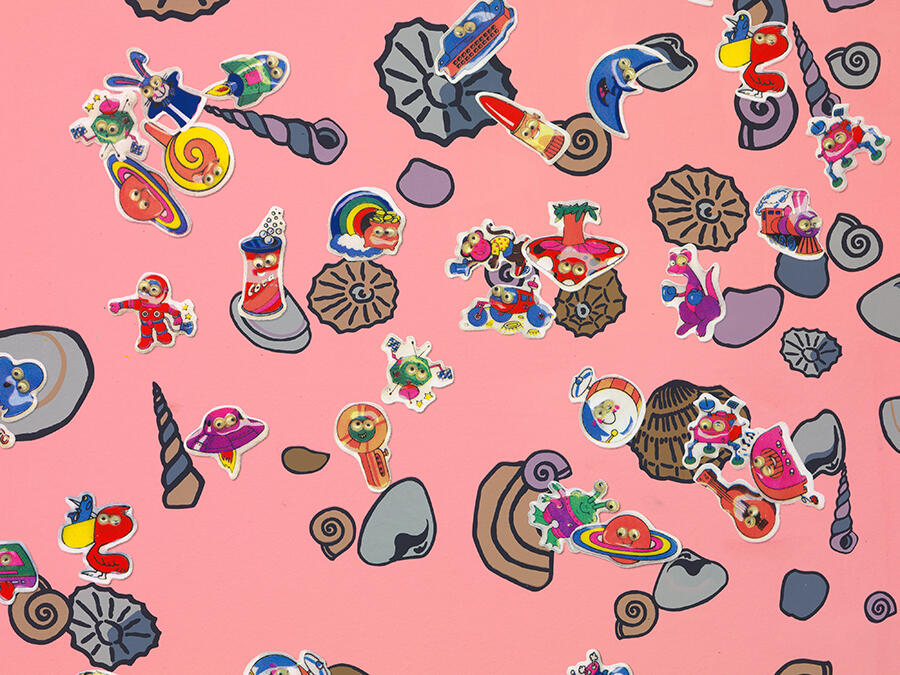 AS: It seems like you are having fun with this, too. There are animals that have crept through – rabbits, mostly, that proliferate across the space – and passages where it looks like the wallpaper has been pulled back to reveal another pattern. It reminds me of the childhood game of ‘pass the parcel’ except that you never get to the parcel, there’s just another layer of paper underneath, and a consolatory boiled sweet.

LO: Once you start saying this is a painting about wallpaper – it is wallpaper and it’s about wallpaper – you can have an errant spotlight or the wallpaper peeling. People always talk about trompe l’oeil and drop-shadow effects like they are an invention of the digital age, but they’re so old! At Cleveland Museum of Art, you can find El Greco’s Christ on the Cross from c.1600 and there are shadows on the clouds behind him, as if he has been lit up from the front. Photoshop is taken from the history of printmaking; it’s based around the way that etching works. This is an old process in a new form. I’m not saying there have not been radical shifts in the history of art, but Photoshop is not one of them. 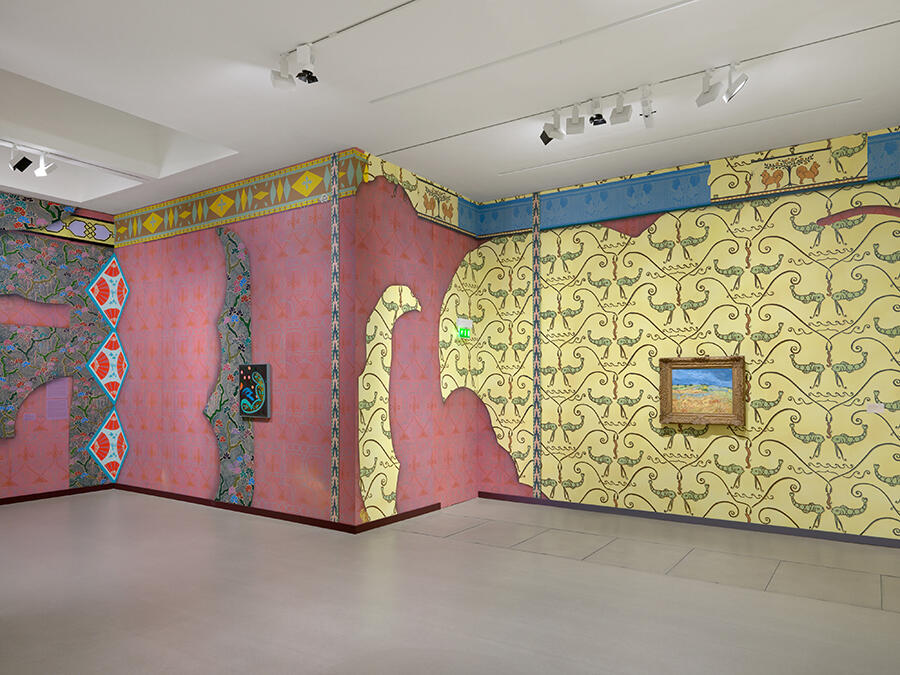 AS: I want to come back to a comment you made about Van Gogh’s technique. We have this idea – which is part of the untrained, unstable artist myth – that he painted using wild gestures. In fact, his mark-making is very precise.

LO: There are many films about Van Gogh, going all the way back to Kirk Douglas in Alain Resnais’s Lust for Life (1956), and they always depict him making these big gestural arm movements using his shoulder. We have the idea that he was an aggressive, almost violent, painter. It’s perhaps not a coincidence that a number of these films were made around the centenary of his death, in 1990, which was also when neo-expressionism was happening. I want anybody to show me where, in a Van Gogh, a mark has been made with the shoulder: it’s all the wrist! His brushstrokes are one or two inches long and they’re all carefully constructed gradations of colour juxtapositions. I’m sure it was intuitive, but it’s also mathematical and calculated: he goes very subtly, very precisely, from one colour to another, using it to show depth of field and perspective. 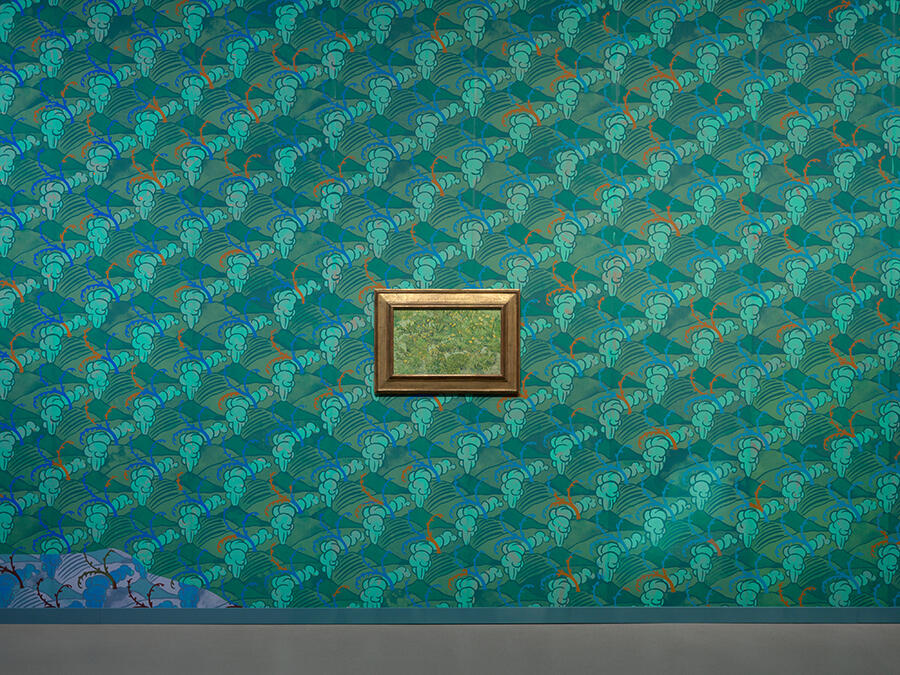 AS: You see that in Dandelions (1889), in the first room of the show. Superficially, it’s the most wallpaper-like of his works in that it has a dispersed, centre-less pattern, which feels flat and repeatable. But actually, when you look closer, you see that every blade of grass has a shadow.

AS: Is it hard, as an artist, to exist in a world that expects you to be Van Gogh?

LO: It’s unfortunate on one level because this paradigm conceals real struggles that artists face today: there is student debt; there is high rent. There is also the question of who gets to make masterpieces. You have to be ‘crazy’. Especially as a woman. You have to be this childless crazy person – a stereotype that is oppressive and offensive. If you are a mother, there is the idea that you can’t be the childlike genius. Whose body can be an artist? Pollock and many others have written about the way that this extends into colonial structures of oppression: when the culture builds these characters that can only be occupied by certain types of people with certain types of privilege. Van Gogh is living rent free in all our minds. Our conversation, no matter how critical, confirms this point.

Laura Owens was the subject of a mid-career retrospective at the Whitney Museum of American Art, New York (2017–18), which travelled to the Dallas Museum of Art (2018) and The Geffen Contemporary at the Museum of Contemporary Art, Los Angeles (2018–19). Earlier this year, the Cleveland Museum of Art presented ‘Laura Owens: Rerun’ at Transformer Station, Cleveland, Ohio, an exhibition made in collaboration with high school students participating in the CMA’s Arts Mastery program, Currently Under Curation (CUC). She is based in Los Angeles, USA.