The Least You Need to Know About Bones

Fiction in response to the work of Richard Tuttle 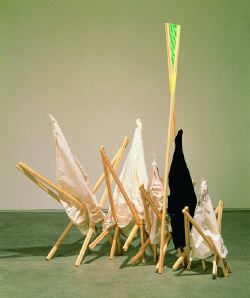 A man and woman sometimes gather in the evening to discuss their future projects together, a conversation that takes place in a hushed, bone-free room. They tap the walls and call out some of the more popular names for people, to make sure they are alone.

The names they recite are shaped inside a bone hollow called a 'mouth'. Their conversation most often freely circles the shame zone that hovers over the table. They take turns arranging the net of bones their skin conceals so that their bodies appear to move. She lifts a small bone resembling a finger, he slides a long, heavy one into place over a chair and expels a hotness called 'breath'. When they discuss children, they are trying to discover if they can create a new set of bones together. Their difficulties are architectural: can the house support the bones, or will structural changes be required? They submit sketches across the table, editing each other's ideas about the new person. When they rehearse the names they might call it, and illustrate their visions of its ultimate shape and colour, each listens privately for a vibration in their bones, pressing fingers into their flesh to determine what they might feel.

Bones prevent the heart from beating so loudly it would deafen its owner. They were first called 'listening sticks' because they absorbed the body's sounds and allowed men and women to hear their own voices during intricate skirmishes in the home. This is why settlers erected mothers-of-bone in loud rooms such as the kitchen. Only later did people bag and animate the mothers so that they might move from room to room, accomplishing broader functions within the family. Boneless people did and said little. They were not capable of fighting. They could hide inside each other's bodies. Without bones, a person entering a room would deafen the people stationed there. He would have to throw blankets in advance of his body, to baffle the sound, an application of fabric that amounted to laying a heavy rug in the room; but sharp-bodied girls could be smothered in this way. Sometimes, instead of blankets, he would throw another person into the room ahead of him, an act referred to as 'turning on the light'. These people were said to have a blinding effect, particularly if they arrived unannounced and appeared to be strangers. Loud people have thin, hollow bones. They can be broken in half and discarded in a pit. They snap as easily as children, but they will not burn as long on a fire. If a loud person tries to store his voice in a jar, he will not be able to, unless the jar is a mouth worn on the face of someone in his family, which he must prize open with his fingers while shouting deep into the hole.

One year, people stacked bones outside their houses to absorb the sounds of the police, who were talking loudly and pounding on the door. If no bones were available, an entire person was used, who would be escorted away and locked in a room. Every family kept a young person for this purpose. Often they sent him out on thieving missions smeared with a special scent to attract the police's attention. Now the police are required to carry a small bone in a polished, black, toy-sized bucket known as a 'holster'. If they wish to be heard, they must hurl the bone away from themselves into a field, creating a current of deafness in the air that passes for weather so mild, even birds can fly in it. When birds actually manage to take off without instantly listing into the colder turbulence that circles a house, where they might crack open over a roof, it indicates the looming presence of the law. Many family conversations grow nervous at the first sign of birds: fathers extend their hands into the air, to test it for sound. When men cough or talk into their hands, they are praying to their own bones, hoping to change their minds about something. The police ride velvet-covered bone cages called 'horses'. Horses are sad because they hear their own bodies sloshing and cracking. They produce an aggressive, highly pitched physical weeping known as 'galloping', and, in this way, spread their feeling across large fields of grass.

People have bones so insects won't flood into their limbs and inflate their bodies to normal size. A person who is insect-controlled often sits and drinks tea, although an insect fluid called 'blood' flows quickly just beneath her skin. She has an accurate walking style and can converse in one or more languages. She sleeps lying down, and uses a filter called 'hair' to attract her mates. The small people in her house call her 'Mom,' and she answers them by collapsing the tension in her face; a release that passes for listening. When she pursues a difficult slalom run of housekeeping through her house, she most likely has failed to seal her bones from escape with fixatives called clothing, and her choreography has become insect-led. Her actions are commanded for the good of something greater, such as a naked man who resembles her father - although he might be younger, and smaller, and weaker, as if playing the part of her husband, though not convincingly. Her motion is voice-activated. When he addresses her, she stands on her toes and lets her arms raise up at her sides. She does a forward bend in the morning to be sure her blood pools at the topmost part of her head. If you sliced her arm open, you would hear a faint buzzing. She has one pair of eyes, and they are often tired and red. When she uses her arms to prop up a document of regret known as a 'book', her bones form an ancient shape, and a brief, flashing signal is sent out through the window into the fields beyond her house, where the hive is.

If you possess the long, white tubing meant to prevent people from squeezing through small holes and disappearing, you have boning material, and you can begin to secure people to your side, ensuring them against a sudden, untraceable departure. Bones of this sort were devised by Father so his children could not hide from him. They would no longer be able to collapse their dimensions and defy the restrictions he had built into his house. He had grown tired of a pocket-sized person, devoid of shape, who could not be broken. He wanted a guarantee, a chance to break something he could not fix. 'Having a talk' with Father meant submitting oneself to the insertion of these bones, no matter how much it tingled.

When children fall into a well after being yelled at, it is not the power of their father's voice that has sent them there, but their desire to enter a long, hollow bone in the earth and become cleansed of sound. They would prefer to hide within their own bodies. When children are yelled at by Father, their skin tightens into a grimace over their faces because their bones have swollen with his voice. Most facial expressions result when the bones of the head respond to the difficult sounds produced in the outside world. Churches were originally built of bone in answer to hard noises that troubled people, but the small fathers and mothers, who were envious of the unused space around their own bodies, entered the churches with small hammers and cups. They positioned themselves near the walls and took from them, attempting to grow taller, wider, bigger. When you pray with your hands against your face, you are trying to add bone mass to your head, which has most likely become weak and brittle over time. When a priest lays his hands over his congregation, he presses his thumb into the soft part of a person's pudding until that person has wept his full share.

Bodies are hidden in the earth after they have finished breathing so that our towns will appear more populated to the birds who fly over them, scanning for a weakness in our communities. Their vision does not tell them who is living or dead. They only see the depth of our ranks: how many persons deep we are, what type of hard, white scaffold supports the town, whether our underground people have an organised or chaotic shape. The more buried bodies, the better. The dead, if all buried together, create the illusion of an army, though the word 'army' means 'illusion' in Old English, which is the system of thought most accessible to the bird. A lattice-work structure of support is offered for those who still stand above ground, who must walk over the bones of former people with no certain knowledge that the earth will not collapse beneath them. At certain, often surprising, moments, men, women, and children fall to the ground and slow to a stop, breathing weakly, clutching their throats. Sometimes these moments are predicted and planned for, in which case a hole has been prepared in advance and a report is written. After a person dies, his bones still function. Although they become dry, and the marrow can be scooped from them, and they can be broken in half even by children, a person who was once built of bones, however tired and still he might seem, can at least drape a skin over himself and block the important doorways of the major houses in the town from the approaches of just about anybody, including the people who live there.