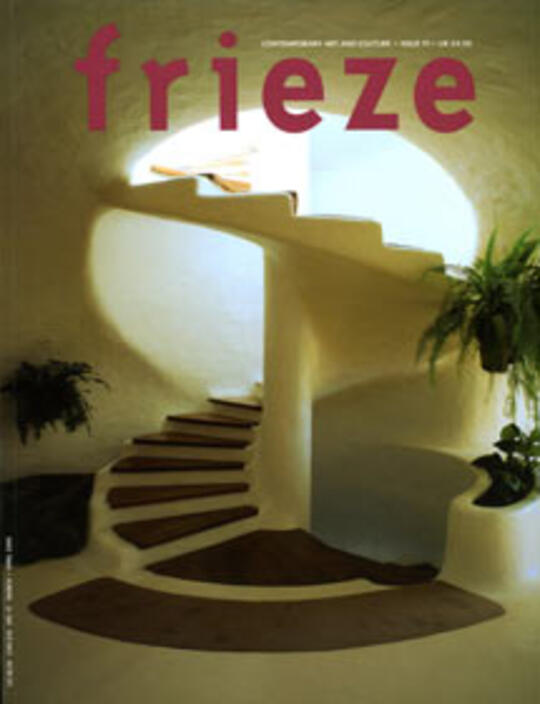 Luca Buvoli has been producing work on the installment plan for the past several years. It has revolved around his character, Not-a-Superhero, a comic-book figure who never manages to stay still or become fully formed. In a variety of media - including film, sculpture, flip books and drawing - Buvoli has laid out bits and pieces of adventures that consistently refuse to coalesce into anything resembling a complete narrative. Most recently he complicated matters by extending the project into the realm of the infomercial.

While this new work does not focus directly on Not-a-Superhero, it addresses flight and escape, two of Buvoli's primary themes. In his five-minute animated film Inside and Outside Time (1997), a scattered stream of images and text jump and tumble across the screen to the strains of music by Jeffrey Lependorf. This excellent soundtrack, which recalls the music of Henry Mancini in the 60s and children's public television shows from the US in the 70s, provides, at turns, an atmosphere of foreboding and triumph. As Not-a-Superhero awkwardly attempts to fly and race to the scene of the crime, short texts appear which pose questions regarding his fate: such as 'Is Not-a-Superhero condemned to an infinite accumulation of equivalent intervals?' Buvoli made the film while using the artists' facilities of New York's Clocktower Program; repeated shots of the face of an outdoor clock could be read as indicative of Buvoli's own concerns about creative output and the rigors of managing time in the studio. At one point, Not-a-Superhero's cape gets caught in the cogs of some mechanism, presumably that of the clock's workings.

Is Buvoli commenting on his own struggle within the space of artistic production? A partial answer could be found in the show's centrepiece Inside and Outside Time, Title Sign (Moebius Strip) (1999), a construction made of wire, plastic, sweet wrappers and other materials. A monitor showing film clips also peeked out from the various sculptural components. It required some effort to find the right configuration of the letters as they hung in the gallery suspended among plastic tubing and sheets of cellophane. The fragile installation seemed to exist in a state between being and becoming, a description of Not-a-Superhero's status that is given in the film. Stepping carefully through its tangled parts, one had the feeling of entering a dynamic process that had been frozen in motion. Yet this work might also shed light on Buvoli's own practice, which rejects the prioritising of materials and combines elements in a way that speaks more to metamorphosis than stasis. Buvoli's interest in a situation of fluid movement is further expressed by his ability to smoothly shift back and forth between two and three dimensions. He achieves this in the film by alternately rendering Not-a-Superhero cartoon-style and moulding him via fragments of colourful materials that scuttle across the room. For instance, when Not-a-Superhero flies in through the window of the Clocktower, the image switches instantly from drawing to a collage applied to the walls, implying that the studio represents the site where the action figure begins to acquire more concrete form. However, his three-dimensional manifestation is broken up and abstracted, hardly as well delineated as the version on paper. Not-a-Superhero is closest to full realisation in the imaginative realm of the flip book, in which the rules of gravity do not apply.

Buvoli's Promotional Video for Flying - Practical Training for Beginners (1999) deals with familiar issues of aerial transport. The artist's voice describes the '33-step method' used to teach the tools of flight, while Lependorf's latest score plays in the background. The artist's manner of speaking takes on a vaguely hypnotic quality as the phrases he utters are delivered in a relaxed, commanding form: 'Come to the wealth of silence and inertia'; 'Experience the intimacy of violence and contrary movements'. Such contradictory actions are best carried out in the permanent condition of flux explored by the artist.

Like his work with Not-a-Superhero, the infomercial and its accompanying diagrams and models appear to be slated for development into a long-term project. It rests on the common theme of thwarted expectations and unfulfilled promises that Buvoli's anti-hero consistently runs up against. Yet this is not meant to be interpreted as entropy or impending failure; on the contrary, it reflects a measured understanding and acceptance of the dilemmas that are regularly faced in the studio.