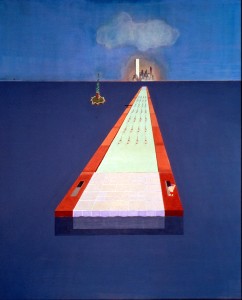 Madelon Vriesendorp co-founded the Office for Metropolitan Architecture (OMA) with her husband, Rem Koolhaas, in 1975, but has been painting cities and quietly collecting esoterica since the late 1960s. Her most famous painting, Flagrant délit (Flagrant Crime, 1975), depicts anthropomorphized versions of the Chrysler Building and the Empire State Building caught in the act by a cuckolded Rockefeller Center. This sharp-edged, funny little work featured on the cover of Koolhaas’ retroactive manifesto for Manhattan, Delirious New York (1978), yet the image was not, as has been written, commissioned or even intended for that seminal book. Indeed, the breadth of work displayed at Vriesendorp’s retrospective at the Architectural Association acted as a corrective to this tendency to sideline her practice as illustrative.

‘The World of Madelon Vriesendorp: Paintings/Postcards/Objects/Games’, curated by Shumon Basar and Stephan Trüby, teased out bittersweet narratives from arrangements of objects and images. Vriesendorp’s Manhattan is almost always unpeopled, the behemoths of Modernism’s old guard cast as performers who are both as flawed and as fickle as their inhabitants. Flagrant délit’s bedroom setting recurs in other paintings, most tellingly in another from the same year, Freud Unlimited, in which the city, reduced to a black rock partially covered by a duvet printed with a street plan, is enclosed in the fleshy curves of a pink boudoir.

Vriesendorp’s fecund cities of towers and tunnels also sexualize the practice of architecture. Zaha, a small portrait from 1978, shows a youthful Zaha Hadid astride a skyscraper, maternally cradling some angular construction in her disjointed arm. That year also saw the apotheosis of Koolhaas’ brave new architecture, with a large-scale exhibition of OMA’s work at the Guggenheim Museum, New York, entitled ‘The Sparkling Metropolis’. The poster, included in the Architectural Association show, depicts Manhattan as a glistening mirage on the blue horizon. Another poster advertised a Koolhaas lecture from 1975 on Salvador Dalí, whose paranoid-critical method was influential on OMA’s early output, just as Vriesendorp’s paintings from that time are obviously indebted to the visual language of the Surrealists.This is clearest in her early etchings and watercolours, small-scale works that recall Pierre Klossowski, or later works which quote Giorgio de Chirico’s empty piazzas.

The real delight of the exhibition lay in the latter part of its title: Vriesendorp’s collection of postcards and objects, and the games that she created with them since the early 1970s. Spread about the Architectural Association’s members’ room, upstairs from the gallery, were red cabinets containing the ‘Objects’ series (1972–ongoing) and The Mind Game (2000–ongoing). The latter comprises several cardboard maquettes – a half-sized man, a large dog and a Python-esque severed foot – scattered around a small room. Visitors to Vriesendorp’s north London studio (close to the house in which Sigmund Freud died) are apparently asked to arrange the figures as some sort of fairy-tale approach to psychological profiling. ‘Objects’ mixes mass-produced trinkets and treasures – tin cars, porcelain Buddhas, a sequined cigar – with the odd surprise, such as a scale model of Koolhaas’ CCTV tower. The artist refers to these formidable collections as ‘cities’; while they appear totalizing and random, they are actually ever growing, micro-categories clustered together but bleeding imperceptibly into each other.

Comprising kitsch embroideries and inept oils, the ‘Bad Paintings’ series (an ongoing project begun in the early 1970s) has a crush on thrift-store serendipities. A pair of independently found versions of Jean-François Millet’s The Angelus (1857–9) – the painting that so troubled Dalí – hang together (and later return in Vriesendorp’s Manhattan Angelus, 2004), and such occurrences echo throughout the exhibition, just as certain postcard images are worked into the background of the 1970s’ paintings. This is less a cherishing of novel coincidences than a serious-minded preoccupation with the popular history of illustrating the metropolis. On a long table in the centre of the first space were arranged a dozen or so groups of postcards, each organized by theme, from motels to botanical gardens – nine of the Woolworth Building are matched by another nine of oversized fruit and vegetables, that staple of Middle America. Eight postcards show the twin towers of the World Trade Center variously as gleaming Blade Runner-style edifices or backed by nightmarish orange clouds. The idealism of these postcard images jostles with the vagaries of architectural documentation, as the public image of landmarks is slowly altered and dispersed.

The collection is book-ended by two open suitcases full of still more indexed postcards. In the exhibition catalogue Charles Jencks refers to these as a musée imaginaire, a kind of alternative image bank to standardized Getty library pictures that is an index of the city rather than the artist’s work. For a non-architect it is unclear what, among these postcards of railways, factories and bizarre globe-like structures, has actually been realized and what is fantasy. Vriesendorp refers to a recent work, Superpainting (2007), as a ‘wishful recording of history’, and this desiring creation of quasi-fictions governs the distracted productivity of her world.