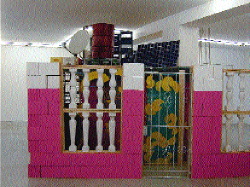 The current popularity of Brazil's new soap opera Cidade dos Homens (City of Men) is a sure sign of the rising cultural currency of South America's shanty towns. Set in one of Rio de Janeiro's sprawling favelas and featuring a cast of local actors, it is directed by Fernando Meirelles, whose recent feature film Cidade de Deus (City of God, 2002) transported the favelas' raw violence, drug running and brutal laws of survival into art house cinemas across Europe. In the film, which spans a decade or so, the favelas are seen to develop structurally from groups of simple houses scattered along dusty pathways to the claustrophobic labyrinth of makeshift buildings crammed along dark narrow alleyways that characterizes the shanty town today.

In Caracas: House with Extended Territory (2003) Marjetica Potrc extracts a prototypical residence from one of Caracas' crowded shanty towns, or barrios, and presents it alone in the clear cool space of Berlin's Galerie Nordenhake. The Slovenian artist, who originally trained as an architect, concerns herself not with the poverty, crime, corruption and violence that underpin Meirelles' view, but with the invention, creativity and lawless self-sufficiency that she believes the barrios manifest. She finds beauty in their organic development and in the emancipation of housing from the hands of the architect and the urban planner: 'growing without any control or planning, [shanty towns] are pointing to our dreams.' Judging by Meirelles' bleak portrayal, it is hard to believe they could point to anything but your worst nightmares, but Potrc's project does not spring from remote idealistic contemplation but is the result of a six-month stay in Venezuela spent studying the barrios with a group of architects, artists and urban planners.

Potrc's positivism is clear to see in the cheerful structure that sits in the centre of the gallery, built of breeze blocks painted hot pink, with rows of mock stone pilasters, wrought iron gates, green tarpaulin and multicoloured stacks of crates bearing the logos of German beer companies. It is not an exact replica of an existing building transplanted into the gallery, as some of her previous works have been, but a reconstruction in the manner of the barrio, that is, using materials that are cheap and to hand while providing the fundamental necessities of shelter, energy, water and communication (solar panels, water tank and satellite dish are all fixed on to the roof). New, clean and free-standing, it speaks in the language of recent abstract sculpture, with its direct appropriation of cheap building materials and found objects and its approximation of an architectural form (think of Manfred Pernice's taciturn maquettes or Isa Genzken's kaleidoscopic scaled-down skyscrapers). You can walk down a passageway between the outer wall and an inner fence that leads to the front door of the tiny box that is the house itself; but the door is locked, you can't go in. It remains a mute study, hovering ambiguously between sculpture, Conceptual architecture and actual housing.

There is no photographic documentation here recording Potrc's time in Caracas (rare these days, when the photographic document seems to be the medium of choice for many artists' interpretations of the complexities of globalization), and it is this distinct absence that allows the construction to retain its abstract form, detached from the dirty reality from which it derives. Instead, two series of drawings accompany the piece and clarify the thought processes and reflections on housing and urban development that inform it. Lively inked diagrams with handwritten text, they pick out evocative details of cities from Hong Kong to Alabama to downtown Belgrade, summing up precisely the fundamental qualities of each like storyboard versions of Marco Polo's tales to Kubla Khan of his travels. Along with personal reflections on the nature of the city and its houses ('the vitality of Caracas can been seen in a house', 'A house is never about a plan, a house is a body') come less enticing observations, describing Caracas as 'a city in constant crisis', with half its population living in barrios. Potrc pinpoints the tendency of South Americans to 'encircle their territory', engendering a state in which the threat of invasion is constant. Therefore, the basic desire for expansion is expressed through fortifications, as House with Extended Territory, with its elaborate walls and fences, shows. And if the space is too tight, then the house expands vertically, as implied here by the crates and boxes stacked up on the roof.

The drawing series is titled 'Caracas Case Study' (2003), bringing to mind the Richard Neutra's case study houses built in California in the 1950s and '60s which were designed to be 'blueprints for modern living'. It is a bold assessment to treat the South American shanty town as today's blueprint, but just as Meirelles sees the South American shanty town as a more vital setting for a soap opera than the middle-class intrigues of Melrose Place, so Potrc claims of Caracas: 'It sounds like a perfect case to study today's metropolis. Instability makes you relevant.'