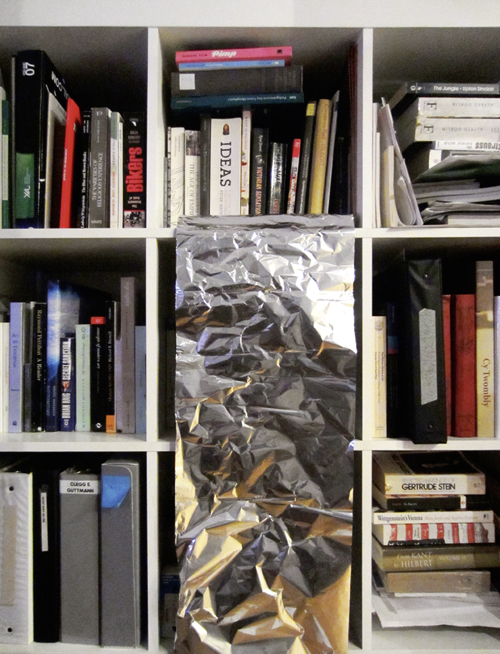 I often have pieces of tin foil hanging around my studio. They’re mostly leftovers from photo shoots. I’ve learned to live with these tin foils. I think they are really beautiful – you start to see how the light shimmers on their surface. But as a result, tin foil is impossible to photograph. As a photographer, normally I observe and then I photograph what I’ve observed. That does not work with tin foil, as it is so unpredictable. You can’t control how light breaks on its crumpled surface. It has an inherent cubist effect. You don’t have to do anything for it to totally destabilize the picture plane. In a very simple way, it does what early Modernism did with painting.

My fascination with tin foil started when my collaborator Michael Clegg and I were doing our series of ‘Austrian portraits’, around 2006. We were looking at Gustav Klimt, who used gold foil to flatten out his paintings. Everything in them is quite ornamental and decorative – but then the face jumps out. The face was 19th century, but the painting was from the 20th. We were interested in trying to achieve something similarly ‘neither/nor’. That was how we got into tin foil as some sort of low-tech version of Klimt’s gold foil. It has an inherent Verfremdungseffekt. It is alien and helplessly trashy, but at the same time, you can’t deny its impact. So to achieve the sublimity of the effects you have to live with the trashiness of the means. I quite like that.

Martin Guttmann is an artist based in Vienna. He works with Michael Clegg as artist duo Clegg & Guttmann. They have had recent solo exhibitions at Galerie Elisabeth & Klaus Thoman, Innsbruck, Galerie Nagel Draxler, Berlin and Kunstmuseum Dieselkraft Cottbus (all 2013).