A tale of textile wars 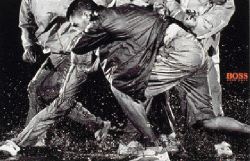 In a multi-page, black and white Hugo Boss ad, included as an opulent insert in the March fashion magazines, two noble, sweaty combatants compete in a Fight Club world. Shorn hair and tense muscles; flying bodies and sprays of sweat. Precisely choreographed strain, pain, and desire distort the faces of the fashion wrestlers. Everything is as it should be. None of the designers at this year's men's fashion shows in Milan could do without the appeal of the battle, the contact, the kick! The international fashion press, with its inimitable knack for creative terminology, excitedly invented the term 'cyber macho'.

The Boss athletes seem to have stepped out of Michelangelo's Battle of the Centaurs (1489-92). Their combat gear doesn't flap around limply on their bodies. Instead, it falls in digitally calculated folds. A closer look reveals a lot of rip cords, concealed zippers running along the entire leg, wide breast pockets, and numerous Velcro flaps. The material is obviously light - techno-light, developed in one of the top laboratories of the high-tech textile industry.

'Successful designers of the future probably won't be movie-mad sissies, but techies with good connections at Hoechst or DuPont', wrote Guy Trebay in the Village Voice in March 1999. Even though Suzy Menkes, doyenne of fashion at the International Herald Tribune, tried at the beginning of this year to dismiss such pronouncements with the line 'forget techno fabrics', the reign of high-tech textiles and functional sportswear has still not yet faded. This year, High Street designers such as Boss, Moschino, or Prada, as well as traditional functional clothing manufacturers like Patagonia and Helly Hansen, continue to make use of the durable collective fantasies of flexibility, mobility, and multi-functionalism. These terms have migrated from management textbooks to the style handbooks which dish out expensive techniques for coping with daily life.

Detailed observation of the Boss ad, combined with feverishly touching the clothing itself, transports the consumer into a virtual environment of fashion science. This world exudes a subtle appeal for conformity, although you are not precisely aware of how the ideological pressure of the cloth will manifest itself. Will this versatile clothing give you a feeling of increased self-assertiveness? Will your body be even more optimised for competitive struggle? Is there a suggestion that the fleece shirt or the Polartec® Climate Control jacket are tools to cross the border zone of one's own potentiality?

A colour ad for Marthe & François Girbaud which appeared in March this year, features twin images of a male model standing and brooding on the pavement in front of an anonymous, grey-brown metropolis. Hand on chin, head slightly tilted to one side, the figure on the right of the photo observes his alter ego on the opposite side of the ad. Both are dressed slightly differently in black multipurpose ensembles, including snap links, backpacks, colour-contrast belts, shoulder pads, and a pouch attached to the gathered trousers.

This near relation to the ethereal Boss wrestler drifts between amorphic and anamorphic effects (the wandering soul, metamorphosis, transcendence). It is a fairy tale of 'harmonious balance beyond external appearances', in which 'the garment becomes a dynamic shell' - the philosophy espoused by M & F Girbaud on their website during 1999. It only requires a small associative leap to go from armouring yourself to arming yourself, and M & F Girbaud are happy to make it: potential customers are provided with dreams of 'garments with Velcro adjustable bands [which] allow for a myriad of shape propositions', perfectly suited for a 'peaceful city warrior'.

Much has been written about the fashion-driven notion of the city as battleground, a war zone in the society of risk. A flirtation with military uniforms and the presumed sexiness of the soldier's life (Comme des Garçons, Helmut Lang, or Yohji Yamamoto) is interpreted as proof of the absence of real war: when it is possible to have so much camouflage chic and so many cargo trousers, perfect peace must have been achieved. So goes the ironic Postmodern argument.

But do these fashion strategies really maintain a distinction between civil and military society? In the 30s and 40s, American fashion designers such as Claire McCardell and Vera Maxwell paved the way for a transition from modern, functional fashion for the urban woman to safety clothing for women engaged in war work. Richard Martin described this as a shift 'from "utility" to "Rosie the Riveter"'. What began, with McCardell and Maxwell, as an emancipatory liberation from fashionable strictures using a revolutionary form of pragmatic, economical design, led to the military necessities of the Second World War.

Today, the rhetoric of 'challenging outdoor activity', which can be most successfully accomplished with the help of 'high-performance' gear, floats between the areas of the military and the civil. The catchphrase of 'safety and mobility' ranges from the world of trekking, climbing, and biking equipment to the manufacturers of Individual Protective Equipment (IPE) for the air force, to the 'closing solutions' of urban-wear designers such as Maharishi or Final Home. When you read the descriptions of hiking shoe manufacturers, such as Timberland, regarding their products' 'special, multidirectional soles', 'protective Kevlar layers' with 'built-in shock-absorbent flex grooves' promising 'additional protective toe and mesh lining', you begin to wonder for what activity is this footwear actually made?

The 'peaceful city warrior' is a touchy construct. On one hand, it's a comic book character from the realm of the imagination, but on the other, it touches upon a very real, unresolved social conflict between pacifist and warmongering interests. The future belongs (once again) to the para-military, the city guerrilla, the uniformed, the militant. The techno-fabric Fight Club is open, mobilisation has begun. Between the visual and the tactile surfaces of the new polyamide equipment, pragmatism is charged with eroticism, the techno-future with an archaic martialism. One might speculate about the results - economic, ecological, and social. The coming trend is a radically refined economy of civil war on a global scale. The semiotic shopping war has already begun - in anticipatory, speculative obedience.