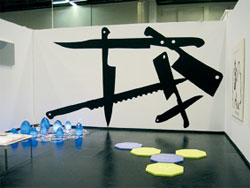 Matthew Brannon’s art lives on the edge, close to anything that will discredit or devalue it. The New York-based artist seeks a kind of self-critical disappearance that seems quietly to mock those of us who take art so seriously, including Brannon himself. We may wonder why some of what he makes counts as art in the first place – as opposed to, say, simple design – and why the stuff that isn’t normally art seems suddenly more worthy of our attention than usual. To that latter end, Brannon routinely uses the announcement cards for his shows to shift attention away from himself, asking artist friends such as Liam Gillick, Sarah Morris and Richard Phillips to lend or make a piece specifically for his promotional materials. People who don’t know Brannon could be forgiven for feeling misled when they get to the show and find that nothing looks familiar, but the intentional confusion isn’t mean-spirited. Like Maurizio Cattelan, whose collaborator Massimiliano Gioni often delivers Cattelan’s public lectures, Brannon prefers to adopt a perverted brand of self-promotion rooted equally in playful criticality and self-doubt.
Motivated jointly by these ambivalent feelings about the constructions of the art world and his significance within them, Brannon latches onto little pieces of popular culture that seem to offer him parallels. Unending Horrible (2004), a witty video piece shown at P.S.1 last year, is a seemingly infinite succession of absurd film production credits: ‘KNEEJERK NEGATIVITY WITH … GREAT WHITE SHARK HEART STUDIOS AND … SHIT FUN FILMS … PRESENTS … COLD GENITALS … IN A ... NIGHTS SWEATS IDEA FOR.’ Just when we’re ready for the film to start, we realize that this is the piece. By removing everything but the framing device and then pushing it into the foreground, Brannon creates a satirical monument to behind-the-scenes battles for credit and acknowledgement.
A similar subversion of expectations is at play in a series of faux haunted house film posters, out of which Unending Horrible developed. On close inspection we note a strange cast of stars and producers. One non-existent flick called Satan’s Bedroom features ‘Aspirin Overdose’, with music by ‘Asshole Detour’. The artist has said that he is drawn to the genre because the plots of such films invariably involve groups of sceptics and groups of believers who come together to challenge their doubts or reaffirm their faith in magical things – to Brannon’s mind, a situation similar to what happens at your regular art show.
At his shows you will find not paintings or sculpture but vinyl wall pieces, prints and fabric works that demand to be taken less seriously at first blush. Brannon enjoys making tasteful things, both to seduce us and to demote what he’s discussing from the fraught realm of high art. Like a fashion designer, he has approached each of his three solo shows with a limited colour palette. Lest this pat prettiness be allowed to stand unchallenged, Brannon continues his diversionary tactics in the way he names his pieces. His stylish tapestries, painted with Asian-inflected bird and floral motifs and embroidered with linear overlays, tend to bear odd titles such as The Guilt Which Organizes Your Fear (Diet Vanilla Coke) (2004). Because his subversive language stands outside the pieces themselves, the tapestries almost don’t have enough self-awareness to rise above backdrop décor. Acknowledging this, Brannon insists they be shown only with other work. If you assume that he likes making decorative work for its own sake – or the opposite, that he does it completely tongue in cheek – you’d be only half-right. What you can correctly assume, though, is that he probably isn’t sure which approach ought to be considered most valid.
That anxiety is also played out in Brannon’s elegant letterpress prints, which explore alcoholism and other contemporary compulsions born of crises of self-confidence. In Disappointed Critic (2004) we find the title phrase among an arrangement of knives and bird heads loaded with hints of emasculation, and beneath it a small line of text printed backwards that reads, ‘DIET PILL PARANOIA & PLASTIC TROPHIES’. It’s a characteristically trashy cocktail of obsessions with power, self-image and
recognition.
What could remain a pathetic sort of personal tragicomedy manages to indict both the art world and our larger value system with its pathologies. Because Brannon locates so much of his subject outside where we normally look to find it, it has been easy for his work to be mischaracterized. He’s been briefly swept up in the Goth fad, for example, obscuring his deeply funny pessimism and biting fear of psychological weakness. But with that very confusion at the core of his practice, I doubt Brannon is complaining. To do so would require a confidence his work belies, and which, endearingly, he doesn’t seem too interested in attaining.