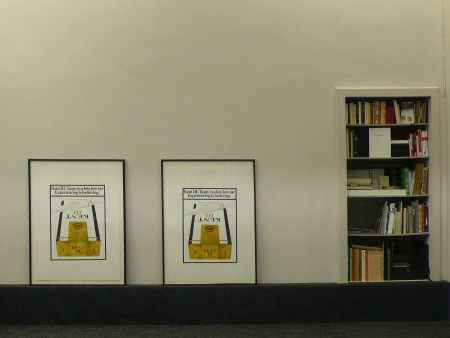 Operating at a time when most cultural institutions were closed for the summer holidays, and ceasing operations by the time they re-opened, the temporary project space Metropole Alliance housed production studios, an archive, an exhibition space and hosted a series of events. This activity hinted at the project’s larger agenda and ensured that it never stayed fixed, referencing – and, in some senses, serving to counter – conceptual models associated with the Bauhaus, the Wiener Werkstätte and Vkhutemas (the early 20th-century Russian avant-garde school). Simon Thompson, one of the three artists running the space, originally proposed the project to the three funding institutions as a way of uniting artists whose work shares certain sensibilities, and who maintain, as Thompson puts it, ‘individual positions within an economy of production’.

Transforming a former factory in south Brussels into a site of collective production, Thompson, along with David Catherall and Jochen Weber, reworked the space extensively after it was donated to them to facilitate the circulation of ideas taking place there (beginning with an exhibition space on the ground floor, and ending with a domestic space on the upper level). Unfolding within the exhibition space and changing radically over the course of six weeks was ‘Dirty Admin’, Catherall’s ever-changing bookshop project. When I saw it, books related to art, film, theory, aesthetics and architecture – many of which inform Catherall’s own practice – were gathered around a series of his large-format prints (‘KENT 111’, 2007). Near the centre of the room an oversized portfolio held enlarged reproductions of individual pages scanned from a Taschen publication – among these a detail of Pieter Bruegel the Elder’s The Hunters in the Snow (1565), which bore an indelible ‘Fuck You’ across it. Catherall had borrowed the book from a friend who returned home one day to find that his ex-girlfriend had defaced his entire personal library with black marker-pen before leaving him.

In the archive room, visitors could make an appointment to see a small but slowly growing collection of ephemera displayed on tables: the flyer announcing the first event in the space, a proposal for a new beam within the building, transcripts of group meetings, and the invitation to the opening of ‘Dirty Admin’ – two-weeks old, but already yellowed.

In the best possible sense, Metropole Alliance positioned itself critically in response to the atelier system and fatigued exhibition models, at times eschewing its own emphasis on production. Just as Catherall displayed constantly mutating moments of personal evolution in his different manifestations of ‘Dirty Admin’ – a never-fixed, conceptual model for a bookstore display – the entire project of Metropole Alliance lay bare its own (uncertain) process of construction in a constantly shifting practice that implied infidelity to old ideological systems as well as unfaithfulness to new ones. Here, tropes of artistic diligence, activity and labour related to cultural production were nearly exhausted in what might be an attempt to find new ways – to borrow a line from Susan Sontag – to mutilate old instruments.

This temporary space will be closed by the time this review has been printed, but the material on the shelves in each distinct version of the ‘Dirty Admin’ bookshop will have been archived long before then. ‘The whole bookshop is coming down tonight,’ Catherall informed me as I left, though only to make way for another incarnation.

EU Reviews , Exhibition Reviews
The Many Aliases of Philippe Thomas