An import-export business, posters, shelters for the homeless and the smell of buns 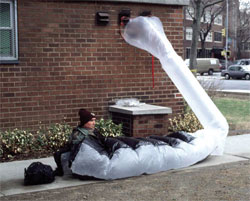 In March this year, while Hungary was in the middle of a parliamentary election, Brooklyn-based Michael Rakowitz walked around Budapest wearing a mobile architecture studio. His invitation to the city’s inhabitants was simple: tell me your dreams for the city. He provided people with supplies to sketch or make models proposing alternatives to the new architecture that has accompanied the city’s building boom. The results were meant to be pasted up around town alongside the political campaign posters and published in a book in the spirit of Unbuilt America, the mid-1980s’ catalogue of forgotten visionary architecture.

This emphasis on revelatory exchange, and on the artist’s self-appointed role as its facilitator, is well-travelled territory – particularly among those who use their work to remediate the urban environment and empower its inhabitants. Rakowitz, who first attracted attention for a series of inflatable plastic structures that could be hooked up to a building’s heating vents and used as homeless housing units, paraSITE shelter (2000), would seem at first glance to be heavily invested in this public practice and its attendant ethic of benign generosity. For a project in 2004 entitled P (Lot), for example, he created tents for parking spaces on the streets of Vienna, made from off-the-shelf car covers, and encouraged people to check them out from the museum and erect them in metered locations. But he disputes the idea that he is providing a service and at times seems uncomfortable with the artistic function of the things he creates.

Certain works may seem more politically activist or critical in nature, though they too lack the self-importance that would make them so. Test Ballot: Examining the Faulty Machinery of Democracy (2004) involved the distribution of 15 voting machines (the same model as those chad-punchers at the heart of Florida’s contested presidential election in 2000) to various cities – including Stockholm, Milan, Ljubljana and Athens – so that Europeans could register a pretend vote in the 2004 US presidential election in real time. And last year Rakowitz restarted his Iraqi grandfather’s defunct import-export business to the Middle East for a piece called Return, using the exhibition budget to allow members of the Iraqi diaspora to send things home from the gallery. As the artist has noted, the transaction was between ‘the displaced sender and the occupied recipient’, using the flow of goods to highlight two parallel kinds of exile. The weight of these works lies in the messy poetics of their transactions rather than in their seemingly overt politics or ethics. Rakowitz’ modest gestures suggest broadly munificent imperatives for art, but these are red herrings.

Unlike others who have used the gallery space for similar circumventions of economic systems – one thinks of various Jens Haaning projects, notably Trade Bartering (1996), which imported food as art objects to avoid tariffs – Rakowitz’ Iraqi trading company has continued outside the exhibition space, no longer fully under the guise of art. The artist seems much more at home in the world beyond the gallery, where the physical and metaphysical economies that attract him are simply in the air.

Often he finds them in air itself, which may be the closest thing Rakowitz has to a medium of choice. When he shows indoors, he sometimes brings it with him. He once climatized part of P.S.1 with an array of humidifiers and ducts (Climate Control, 2000–01) and vented a Chinese bakery into an exhibition space to fill it with the smell of buns – both times with only the barest whiff of institutional critique (compare Art & Language or Michael Asher). Indeed, Rakowitz doesn’t seem willing to ratify the boundary between inside and out, leaving us with little to focus on other than the invisible ether passing between and around us.

When he reins it in, it’s often to animate the dashed Utopian ambitions of modern architecture. Rakowitz’ installation Dull Roar (2005) centred on a vinyl blow-up model of Minoru Yamasaki’s grim Pruitt-Igoe public housing project in St Louis, which repeatedly inflated and deflated in a darkly comic re-enactment of its hopeful 1950s’ construction and its celebrated demolition in 1972. With drawings and other small sculptures Rakowitz tied together the local baseball team’s loss the night of the implosion, the ignoble death of Louis Kahn in a Penn Station lavatory and the collapse of Yamasaki’s more famous venture the World Trade Center.

A similar kind of referential slapstick was at play in a show the artist did in Turin early this year. Endgames (2006) followed Buckminster Fuller’s geodesic dome from its inception in 1948 through an embarrassing fire that destroyed one version constructed for Montreal’s Expo ’67 to the collapse of the local Montreal baseball team in 2004. Another series focused on the defunct Houston Astrodome, recently infamous for its pitiful accommodation of hurricane refugees. Taking inspiration from a notation in Islamic law that allows existing structures to function as religious architecture, Rakowitz proposed the conversion of disused sports stadiums to mosques, making an Astroturf prayer rug to drive home his point.

This inspired convolution of events and relations weaves a loose web of indictments against culprits ranging from Modernist architects and planners to our collective obsession with sport, for crimes that remain unclear. Even indoors, when the conditions could seem most controllable, Rakowitz’ projects deflect concerted attention away from the individual works and onto the associative process between them, destabilizing themselves and the spectatorial transaction at large.