Adventure and anthropology, false economics and ditch digging in Devon 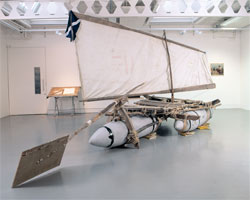 In the wake of the catastrophe in the Indian Ocean, politicians and economists persist in talking – without apparent thought for the grotesquery of the analogy– in terms of a kind of monetary hydraulics. Economics is apparently all a matter of flows, reserves, pressure and relief: as if the global economy were some vast agglomeration of complex plumbing. Michael Stevenson has long been exercised by such metaphorics, by the flimsy conduits installed to convince us that the flows can be regulated, tapped, and productively siphoned. His most recent work invents a convolution of alternate channels through which the energies of economics, history and the art market are made to follow devious courses.
At the Venice Biennale in 2003, Stevenson exhibited the Moniac, a bizarre hydraulic ‘computer’ designed in 1949 by a New Zealand economist, Dr. W. A. Phillips, to demonstrate the forces and checks of a national economy. What interests Stevenson most, though, is the moment when such systems conjure odd anomalies: artifacts and events which seem to suggest another economic model entirely, one founded on the extravagance of the gift or the expenditure of huge effort for paltry return. In This is the Trekka (2003), he found the perfect model for an apparently rational economics gone whimsically awry: a clone of the Land Rover manufactured in New Zealand in the late 1960s, a tinny sham masquerading as a sturdy all-terrain vehicle. Supposedly a product of indigenous industry, the rickety Trekka was in fact cobbled together from Czech parts bartered for agricultural produce. And far from a gleaming artifact of Fordist assemblage, the hapless vehicle was not exactly mass-produced: only a couple of thousand were ever made.
With Rakit, his recent installation at the Herbert Read Gallery, Canterbury, Stevenson has found a story that allows him to reflect on the nature of the gift and to effect his own shorting of the art market’s circuit with a singularly resonant gesture. In 1952, the artist Ian Fairweather, living reclusively near Darwin, left Australia on a raft, intending to cross the Timor Sea. After 16 days floundering on a vessel lashed together out of three old aircraft fuel tanks and a few fragments of parachute fabric, Fairweather was fortunate enough to land on the tiny island of Roti, off the coast of Timor (he would otherwise have drifted well clear of his destination and vanished). Deported to London, he was made to dig ditches in Devon to pay for his passage. For Stevenson, Fairweather is a kind of exemplary scandal adrift in the global economy: the penniless artist who trusts his fate to the flimsiest of objects, expends astonishing energy (if, apparently, little forethought) to achieve nothing beyond a set of encounters and exchanges where no money changes hands.
Rakit transforms this (in Australia, quite well known) tale into an image of eccentric global exchange. With the help of a troop of Sea Scouts in nearby Whitstable, Stevenson restaged the beginnings of Fairweather’s journey. With his industrious young assistants (each later, in a rather touching ceremony, awarded a commemorative badge), he built a replica, based on a Roti islander’s sketch, of the artist’s raft (rakit in Indonesian). The object itself — a frail concoction of metal, wood, rope and fabric — sat in the middle of the gallery, resting on stacks of National Geographic magazines. A DVD, Making for Sheppey, records the building of the raft, and Stevenson’s uncertain setting out: splayed across it, unable to stand, trying to work the sail with one raised foot. In fact, the raft is even more doomed than it looks; it is to be gifted to a group of German collectors in Aachen (thereby completing the alternate circuit of its production), who will divide it between them, turning it into useless flotsam.
The raft is just one of a host of found or lovingly crafted exhibits that give Rakit (as with Stevenson’s earlier work) something of the earnestness of a local museum exhibit. On close inspection, the objects turn out to be, materially, wholly in excess of their apparent documentary function. A reproduction of the original Times report on Fairweather’s journey is revealed as Stevenson’s own reprint. A copy of Marcel Mauss’s classic study The Gift (1954) replicates itself into glittering, beaded fabric. A glass case contains more National Geographics, a stranded globe, fragments of forgotten cartography. Complex knots, carvings and weavings turn Fairweather’s tale into a kind of vastly intricate school project, discovering its adventurous avatar in a tapestry reproduction of John Everett Millais’s The Boyhood of Raleigh (1870) which Stevenson has discovered in a nearby Canterbury charity shop. It’s a fittingly homely and sentimentalized punctum to a work which discovers numerous unravelling threads between adventure and anthropology, document and memento, purely private mythology and collective reception.