A man falls against the back of my leg, knocking me off balance. Turning to scold him I see he is wearing a high-viz jacket over the padded black suit of a motorbike courier. He stands out from the urbane crowd, gathered on the rooftop of an empty London car park last Friday night to see Boris Charmatz’s Musée de la danse — danse de nuit, presented by Sadler’s Wells. As it turns out, the man is Charmatz himself.

Inspired by the Charlie Hebdo shootings in Paris in 2015, Charmatz and his troupe are quick to break apart the audience who have gathered at dusk. He performs with five others dancers, a mix of race and genders, styled in cool-city-casual. They could be any six bodies passing through any urban space. They disperse among the audience, separating us with quick repetitive movements and off-tempo monologues that in the choreographer’s words, ‘funnel action’.

Four of Charmatz's troupe bear portable light grids on their backs (designed by Yves Godin), beaming so strong they both illuminate and blind. The effect is that, as the dancers part us, the light carriers fence us back in. We’re caught in this crosscurrent. Charmatz is everywhere, enigmatic and terrifying. Suddenly he’s back on the ground rolling toward me at pace. I cannot get my feet out of his way in time and shuffle backwards, trapped, not knowing what’s behind me. Hysterical in a way I don’t fully understand, I inadvertently laugh to alleviate my shock.

Over the course of an hour we’re led through various tableaux, where dancers interpret different aspects of the Charlie Hebdo shooting from a range of perspectives. These include a surreal dérive where Charmatz yells out lines from Tim Etchells' 2001 video Starfucker which imagines Hollywood celebrities as victims of graphic violence. There’s an implication throughout that terrorism is contingent on media imagery, that terror infects us all through the pictures in which it is portrayed. Narrative sections progress swiftly, splintering and re-gathering us as we are moved en masse across this vast concrete slab. Those who stand away from the crowd are lifted forward, cradled or tugged backwards by the pranking dancers; those who seek cover are extricated too. 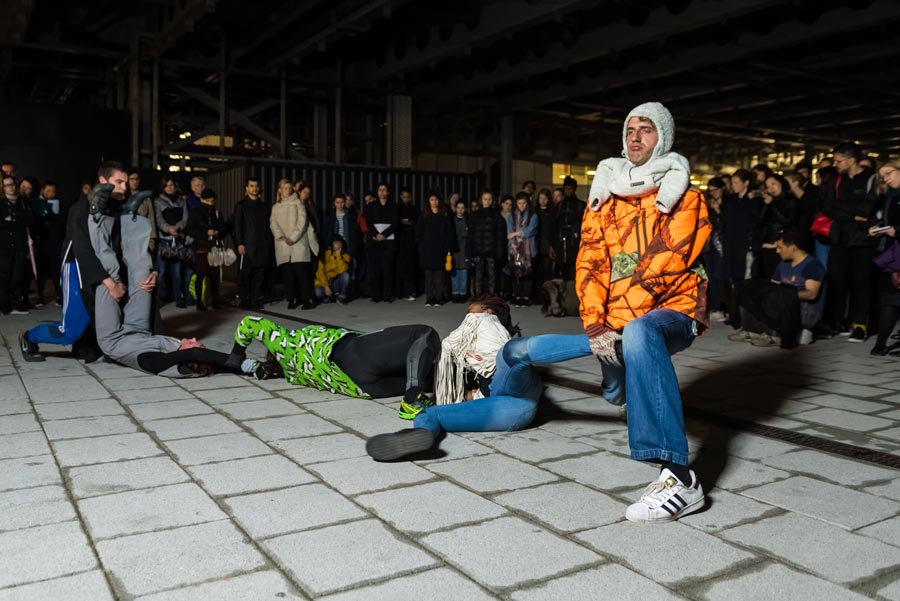 The car park is in London’s now defunct Olympic village. It’s a colossal stage, with a panorama of the city, upon which urban crowd dynamics are clearly Charmatz’s focal point. In 2015, he produced ‘Musée de la Dance’ at Tate Modern, where he integrated 90 dancers among the visitors to its Turbine Hall, part-dance routine, part-flashmob. His aim was to alter visitors’ perceptions, to make a work that would, ‘stay in the bodies of the people who watched it’. As danse de nuit unfurls I can feel it get inside me, trip me up and shape me. This choreography targets the audience, and physically negotiating these changing group dynamics seeds a particular kind of muscle memory.

At 10:30pm on Monday evening, exactly three days later, news breaks of a suspected terror attack in Manchester. Early reports count 19 dead, with the death toll expected to rise. A suicide bomb was detonated at a pop concert where many attending were children. Tuesday morning, images of young girls’ faces appear on screens, other women’s daughters as perfect and hopeful as my own. Grief overwhelms speech at this unfathomable trauma. All day my body keeps remembering this merciless situation it never saw in person. Visceral, physical flashbacks of bright lights. Dispersing, panicked crowds. City grids, and unknown agents moving swiftly through them. 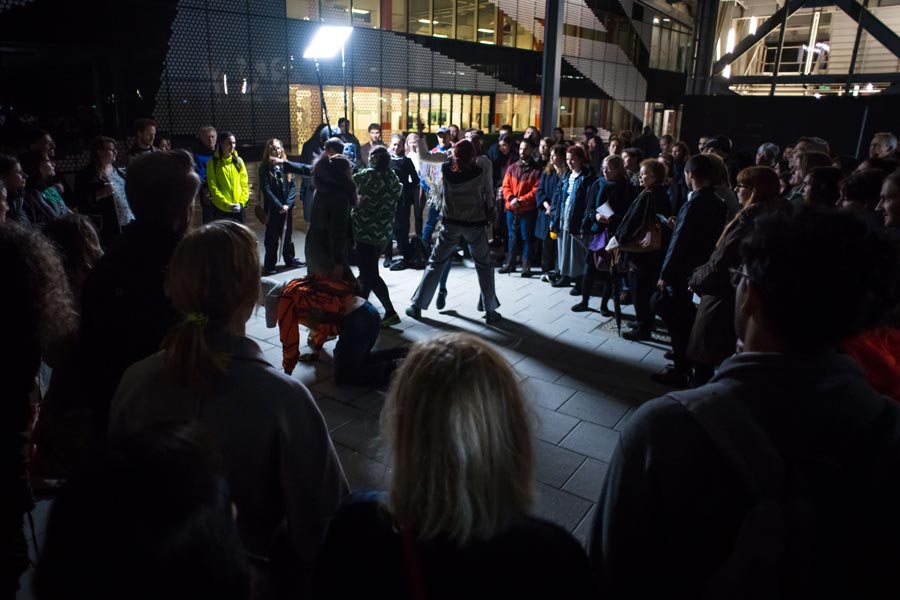 Andy Burnham says he has never seen an event so devastating. That woman’s boot was missing. Salma Hayek refuses to comment at Cannes. That man was clinging to a pillar. Ariana Grande is broken. That young boy was carried away from his mother. Charmatz’s performance in responding to the Charlie Hebdo shootings anticipates the Manchester atrocity. Materializing between these successive acts of violence, it has affected my perceptions of both. This work ‘stay[s] inside the bodies of the people who watched it’, or certainly it stayed in mine, rooting a deep corporeal empathy for all those involved in this week’s horrors.

Charmatz’s work acknowledges urban congregations as a target for terrorism but it also proposes the physicality of crowds as a responsive, adaptive body. In its capacity to alter our perception of events past and present, works like this can perhaps also help us imagine other ways of moving together in future. In a time of such uncertainty, this has never felt so vital.