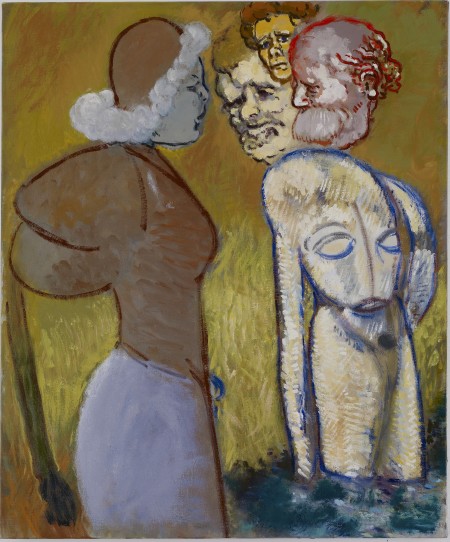 Tait doesn’t deal in ascribable meanings but in rambling intensities and amplifications via conjunction: not in what things are, but in what sparks between them. Set amid golden grasses but souring in mood as you survey it, Untitled (all works 2009) finds a woman in fur-trimmed cap and puffy sleeves hectoring a man with three disembodied heads – of three different ages (of man?) but all expressing misery – who stands knee-deep in a river while a hatched Cubist tribal mask materializes on his twisted back. The woman’s aggrieved profile recalls, as a number of Tait’s recent canvases do, Sir John Tenniel’s illustrations for Lewis Carroll’s Alice books (1865–71); she coexists fractiously with a reference to Pablo Picasso and Georges Braque battling beneath the roofs of Montmartre. These paintings are so overtly constructed, and so perverse in composition, that they press you to envision their earlier stages (Sunday Afternoon is all but obliterated by pale cream blotches). Maybe there was a fairly straightforward encounter here, between the oldest head and the scary woman, yet Tait, characteristically, ploughed on until he arrived at something that made far less sense though carried much more weight.

That’s instinct in action, a gut-driven ‘yes’ following a thousand ‘no’s. But, as this show’s referentiality implied, honed instinct is only the residue of lengthy looking. Tait has always been a painter of mutable, dissolving figures (as opposed to a portraitist), and structural consistency here often resides in newly overt nods to the Modernists who dismantled the human face and body. A greenish cartoon of a Francis Bacon head slumbers in the lower half of A Cure. The serene knottiness of this canvas, however, underwritten by all manner of neat little compositional tricks and latent consistencies, lies again in an obliquely angled meeting: between that smeary jade face and the second, airborne figure above it, half-bird, half-fish, human head, bushy hair, sideburns. Is one dreaming the other? Are both dreaming? Are both dreams?

Tait, who went to art school in the late 1980s, now works like someone who has effectively internalized Postmodernism: he primarily uses combinatorial allusion to establish moods spacious enough to swim in. Paintings like the tranquil yet unsettled Turquoise Trousers, with its maybe-shipwrecked figure in angular bluish flares drowsing against some giant mystery animal on the shore imply risk, self-surprise and openness to chance. Antique artistry drifts unpredictably through Tait’s art like involuntary memory, as unbidden and unhidden as the face (eerily resembling Jake Chapman) which, in one of the seven Untitled paintings, gloms randomly onto the side of a boat’s orange sails-cum-giant-child’s-cloak. There’s something bracingly contemporary about this approach, which couples ineradicable nostalgia for a legendary past with awareness that time, as we know it, flows one way only. If that condition’s upshot is a lifetime’s insecure anxiety, then Tait’s art – something like Surrealism detached from a programme of liberation, aiming only as high as amelioration – seeks to make insecure anxiety as fascinating and febrile as possible. It wants to make a home amid its prickles.

Tait’s sculptures often manage this too, though less enticingly and more austerely. The first work you encounter in ‘Les Toits de Parise’, sited in the foyer and untitled, is a rough rectangle of plasterboard perched on a stool, arrayed with an oddly assured assembly of creamily painted and/or cast objects, including Actimel bottles and twigs, and then some puzzling ridged cylinders. Just as the viewer is becoming accommodated to there being a distinct deficit of why, the useful quotient of what is denied too. So you fall back on what you can know, what you can see; sometimes it feels like a lifebelt, and sometimes it just feels like something with a hole in the middle.