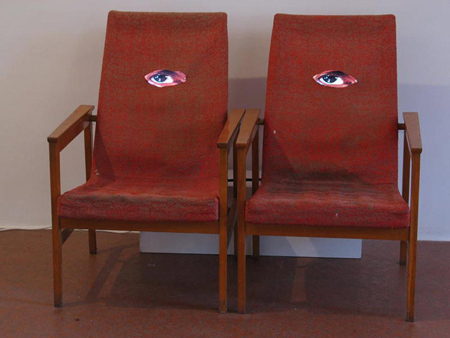 Organized to coincide with Hungary’s six-month presidency of the EU, and as part of the wider cultural programme ‘Hungary in Focus’, the group exhibition ‘The New Arrivals: 8 Contemporary Artists from Hungary’ rose above what could have been little more than a politically-motivated national promotion. Indeed, in its selection of seven established, mid-generation artists, curated by an eighth, Péter Forgács, ‘The New Arrivals’ effectively side-stepped the obvious clichés of such a showcase, producing an original and individualistic selection of art works that avoided any attempt to provide a quick or easy insight into the country currently leading Europe’s political union.

That the title could be read as an ironic declaration on a number of levels – geographical, artistic or political – is indicative of an exhibition that shirked a unifying narrative in favour of providing a singular platform for each participant. Forgács provided each of his contemporaries with a self-enclosed exhibition space; anyone seeking a neat summary of the state of Hungarian contemporary art would surely have been disappointed. The overall mood of the work, if anything, could be characterized as claustrophobic, insular and psychological. Here were artists addressing weighty issues: religion, death, decay, loss and transition. Orshi Drozdik’s installation, Manufacturing the Self: The Body Self, made up of a series of works created between 1984 and 1993, best exemplified this tendency toward self-reflection. Literally embracing questions of self-love, the artist cast her body in rubber and then composed love letters to the resulting ‘medical Venus’. With the life-size, naked figurine displayed in the centre of the room, Drozdik’s exhaustive installation was both temple and morgue, an elucidation of the kind of love Frankenstein might hold for his monster, or as one of the love letters exclaims, ‘Via Narcissus, I cast Pygmalion’.

The troubled aesthetic of Manufacturing the Self continued in works by Balázs Kicsiny, well known for his muscular installations and sculptures. Sweet Home (2005) consists of a life-sized figure dressed in a trench coat, his face covered by chains that attach to anchors weighing him down to the floor. By contrast, Imre Bukta and Gyula Várnai provided a subtler outlook, while retaining some of the uncanny feel of Kicsiny’s characters. Bukta’s work is more explicitly rooted in the rural community from which he hails. His multi-layered installations and drawings speak with a wry humour of the Hungarian transition from communist society and the parallel erosion of rural life. The convergence of these themes was encapsulated in What’s Up? (2008), in which seven clay satellite dishes are arranged in the form of a cross, at first resembling the concrete of Eastern European tower blocks, but on closer inspection looking more like the crude stucco used on rural cottages from the region, which are now marked by metal dishes beaming in images from a capitalist world.

Surprisingly, hardest of all to fit into this collection of Hungarian art was curator Forgács’ own contribution, the multimedia installation The Danube Exodus – The Rippling Currents of the River (2002), including a multi-channel video installation of archival footage. The work presents his ongoing investigation into the fate of communities of Bessarabian Jews and Germans who were transported by the same steamboat captain along the Danube as part of what for both was a forced exodus from their homeland in the build-up to World War II. Given the story told by The Danube Exodus, it is poignant that it should be shown in an exhibition linked to the EU presidency in the de facto capital of a now unified Europe. This lesson in the transience of lives, homelands and borders might also stand as an apt metaphor for the sense that Hungary is itself looking to understand its role in the New Europe, while its artists look to attract the global attention their work deserves.