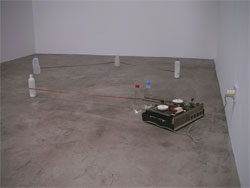 An electric beer pump slumped in the corner is presumably redundant and ready for collection after the recent exhibition opening, but it could feasibly be one of Nina Canell’s sculptures. Canell liberates man-made objects from the drudgery of service, ascribing them a new status as vacuous, absurd or oblique. There is some relation here to carnival, when members of a society ignore hierarchical impositions for temporary transgressions and general irresponsibility. If objects had consciousness, they too might occasionally shun utility and indulge themselves in pointless new associations.

The handles of two yellow buckets become their support as they couple, rim to rim, helped into coalition by a humble milk-bottle lid, which holds the handles apart and the balancing act in thrall. Elsewhere Canell facilitates the elegant union of an orange plastic culinary whisk with a baby-blue funnel, and a grey tin funnel with a white plastic hair-dryer. Besides demonstrating her material matchmaking skills, though, there is more to these sculptural propositions than mere formal punning. Canell seems to suggest that the hierarchies of objects are negotiable, that the technologically advanced and the neolithically dumb are equally vulnerable to obsolescence. Whether outstripped by a new technology or brashly absorbed by an artist into the level playing field of her formal lexicon, no instrument remains at the top of the cultural pile for long.

A number of pieces here incorporate electronic audio-visual equipment, from the commonplace television monitor and the somewhat less attainable video projector to the outmoded magnetic tape recorder and a sinisterly exotic electro-physiological instrument. In the case of Stråken (2005) the equipment becomes invisible as we accept it as a means to display work – a video of an empty boat circling round a lake, demonstrating farcical redundancy in this case. But in Half the Pace of a Given Place (2005) the reel-to-reel tape recorder has a dual purpose. Not only does it play back the electronic sound-track, but it has also been coaxed out into a drawing of sorts. The magnetic tape, instead of simply rolling over the cassette heads, passes over into the world at large, running round six plastic bottles, spaced feet apart and filled with water for stability. The audio takes on connotations of tension, static and friction as the vectors of space and time converge; the equipment becomes not an inert mode of presentation but a prosthetic embodiment of the audio.

Providing both the audio and sculptural texture for Dawn Chorus (2005), hand-held tape recorders and dictaphones are arranged on a low wooden plinth, like members of a ramshackle orchestra on a stage; interspersed orange and white neon tubes add a spangle of pop to the rock ’n’ roll mess of cables. The apparently abstract sound, made in collaboration with Robin Watkins, is in fact ‘a hybrid of human voice, washed in air particles and played through electric tape recorders, and the synthetic energy radiating from blimps of neon’. I’m not sure how a human voice is washed in air particles, but it demonstrates how Canell does not discriminate against audio as a sculptural medium – it is, after all, as malleable as any physical material and as representational or abstract as any arrangement of paint.

In this synaesthetic environment, where sight and sound overlap and withdraw from one another, Canell’s more straightforward silent sculptures still sing and hum associatively. A clutch of pink and red plastic containers, petal-like in shape, seems to grow from the centre of a piece of pegboard propped up on some rough cuts of timber. The implied arithmetic progression of the title, -2, 8, 20, 28, 50, 82, 126 (2005), and the fungal formation of the containers promise to spread with the musicality of scales and arpeggios. But perhaps I am assuming too much overlap in the work. It could be that Canell considers her sculptures as autonomous, but here it is difficult to isolate one piece from the next or from its own material history, let alone the sonic environment. Perhaps if the sound element were absent, each piece could achieve an inert formalism, but this unassailability would be no great strength – it is the tides of influence that build into an animating force. This may well be problematic in a group show, where influence can be interpreted as intrusion; here however the effect is positively miasmic.