BY Justin Hoffmann, translated by Imke Werner in Reviews | 01 JAN 01 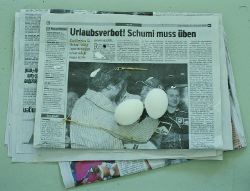 Although an interest in urban architecture linked the four artists chosen by Heike Ander for 'No Swimming', it was not immediately obvious - many of them use traditional visual means and appear strongly committed to both personal imagery and individual approaches to thinking. It is the kind of art that was definitely conceived for exhibition rooms, not public spaces.

A question which particularly preoccupied urban developers a century ago was how to usefully integrate towns with nature. It led to the development of the Gartenstadt (garden town). A similar concern is evident in Pia Rönicke's videos, with their poetic, almost devout treatment of architectural objects and utopian Modernism. Interested in the links between town and nature, she chose Walter Gropius' housing scheme 'Törten' in Dessau (Somewhere Out There, 1998). Here, the inhabitants were given the opportunity of partial self-sufficiency by means of small gardens which were laid out in conjunction with the houses. Rönicke's dramaturgy is not built on cinematic sequences but on super-impositions and slow tracking shots along static images. By manipulating these images digitally, she installed her strange visions, like rice fields, on the roofs of skyscrapers by Mies van der Rohe (Outside the Living Room, 2000).

Determining the limits of what is feasible, the city Brasilia was built in the middle of the jungle. Sean Snyder's colour photographs, Brasilia (2000), look like selective planning: what has happened in terms of architecture and sociology since the capital of Brazil was founded? What has remained of the planner's original intentions? Snyder juxtaposes the state of the early buildings, ambitious in terms of urban planning, with contemporary council houses. Next to expressways, paths have emerged, lending meadows a structure and pointing towards the fact that sufficient pavements for the inhabitants had simply been forgotten. As with so many images of failed utopias, Snyder's work evokes melancholic emotions.

Danish artist Henrik Olesen is interested in invisible boundaries. A pile of paper sheets listing the judicial representation of homosexuals as criminals (Homosexual Rights Around The World, 2000), refers to a boundary which exists in those parts of the world where the death penalty is enforced for homosexuality. Olesen's intrusions into the Kunstverein's architecture - using second-hand, partly painted wooden panels which the artist found in the gallery's storage room - restricted one passageway and completely blocked another.

Also on show was a series of photographs by the late Klaus Hohlfeld - Taucher (Diver, 1987-90), Vogel (Bird, 1990), Hunger (1987) and Hoser (Trousers, 1987)- for which he set letters into polystyrene, thus creating an unusual link between image and text. They are often as tautological as they are contrary and satirical. Similar hybrid paper objects, small sculptures and reliefs were presented in display cases. Being smaller in scale and more bizarre than ordinary architectural models, they were by no means functional in the conventional sense of the word. It is as if these miniatures were mixtures of circuit diagrams and town models: different perspectives are employed and sensory references deliberately perforated.

Although the works presented in 'No Swimming' distinguished themselves by an interesting sensibility and poetic potential, what was missing was the unpredictable and unexpected angle suggested by the mysterious title of the show.