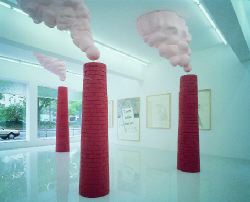 The first time I saw one of Olav Westphalen's smokestacks, it was sitting unobtrusively in the hallway in P.S.1's 'Greater New York' exhibition a year or so ago. The majority of the opening day crowd swept by without seeming to notice it. It got kicked, smeared, pushed first to one side, then the other. Some people tried to lean on it. It was not digital or glittery, and didn't have a screen. Like some kind of homeless art work, it was almost invisible. The irony, of course, is that 'real' smokestacks are masterpieces of industrial architecture. In a thousand years, if they still exist, museums might collect them as the profound, mysterious achievements of our time.

You might be tempted to see Westphalen's smokestacks as Dadaist anti-art, a gesture towards non-sense, and a dig at the art world. At first sight, his new exhibition - which included three red smokestacks, apparently churning out clouds of pink smoke, and several large New Yorker-style cartoons - lent itself to this interpretation. It's true that Westphalen seems deeply suspicious of art in the grand sense, but deadpan as these smokestacks are, they are not Dadaist and do not function through negation. Instead, like Molly Bloom in James Joyce's Ulysses (1922), they begin and end with an affirmative 'yes'.

Similar in tone to Joyce's masterpiece, Westphalen's work is both theatrical and comic. These three smokestacks look as if they might have been stolen from the set of a children's television show. These are smokestacks as 3D animation or television props, like The Simpsons re-inventing the real world. But Westphalen isn't playing the high/low game of Pop. These pieces aren't kitsch or kitsch as art and Westphalen isn't celebrating art's ability to redeem the detritus of industry. To see these sculptures as any of the above is to miss the tone of the project. It's a matter of voice and, as they say in music, of accent.

The best analogy to Westphalen's gesture is possibly the character, Latka, who Andy Kaufman invented for the 1970s television sitcom Taxi. What made his voice so hilarious was its combination of an Eastern European accent with that of an alien. No matter what Latka actually said, he always sounded inhuman. On some levels, his voice was profoundly anti-comic, as if he were suffering from a terminal condition. Like Latka, Westphalen's sculptures squeak in a strange foreign accent that's both unbelievably amusing and ultimately unsettling. This can be glimpsed in his cartoons, where the metaphor of voice is both explicit and refused. I am No Better than You (all works 2000), for example, is a drawing of a signboard inscribed with the statement of the title. Its effect derives from the contrast of confession with the amplification and hard sell you normally expect from a sign. The twist is that you don't really know how to read this sentence. Is it ironic?

In his essay, 'On the Essence of Laughter' (1855), Baudelaire describes the moment when laughter becomes shadowed with fear 'the absolute comic'. In Westphalen's art, it is almost as if sculpture itself were laughing and grimacing, afraid that it has been reduced to a cartoon version of itself. Despite this anxiety, Westphalen finds something affirming in its sad condition. Like Molly Bloom, he says 'and yes I said yes I will yes'.