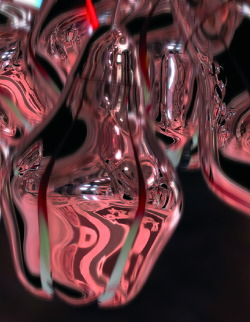 It's hard to get the measure of an artist who in the last four years has made films ranging from Minimalist white-on-white loops to elaborate Symbolist narratives combining live action and state-of-the-art animation.

Besides the films, there are also Haluk Akakçe's drawings and paintings on paper and board, and wall paintings that sometimes extend to the ceiling and floor. When the work is not abstract, Akakçe draws imagery from human, mechanical and botanical sources, usually fusing one with another or hybridizing all three. Often the future is evoked, but through a vocabulary lifted from the present day (swish office interiors, recent scientific discoveries, digital technology) or borrowed from the past (sinewy Art Nouveau lines, William Morris-like wallpaper, billowing 19th-century costume). Even the abstract works, or the abstract passages in otherwise representational films and paintings, reverberate with cultural history: Suprematism, Constructivism, Bauhaus, De Stijl, Minimalism and Op Art are all evoked.

One feature that runs through both the abstract and figurative work is an elastic treatment of space that defies the way we usually perceive things and situate ourselves in relation to them. Seen from the entrance, the walls, floor and ceiling Akakçe painted for his 'Blood Pressure' exhibition (2001) at Deitch Projects seem to have little more than the shallow depth suggested in his drawings on flat surfaces. Large areas of solid blood red, sky blue and white soften, blur and erase the geometry of the architecture by flirting with its edges one moment and veering away on their own course the next. Once the visitor enters the corridor, those same colours and forms have the opposite effect: the space seems stretched, the forces of gravity seemingly replaced by other natural laws, perhaps those governing the flow of water or air. The corridor becomes a tunnel or canal, an amalgamation of something one might find in a body and something belonging in the landscape.

The films, too, anticipate and rework the physical space of the viewer: typically, the space of the projected image and the room form a heady continuum. In some films the edges of the image are black for large parts of their duration. This way, imagery seems to belong to the actual room we're in. In Snow Black (2003), for example, abstract shapes, illusionistically rendered to resemble boxes, rooms or buildings, seem to pop out of the wall they are projected on to. In The Measure of All Things (2000) a female astronaut seems to occupy the same space as us, while the view of smoky Manhattan buildings we see through her office window appears to be outside as well. We are made to believe this since everything around the astronaut and her office window this passage is live action, incidentally is surrounded by absolute darkness. The illusion is reinforced by Akakçe's technique of projecting on to black surfaces, to dissolve the frame of the image further: the areas of the picture that weren't subjected to light appear as black on black, lending them a velvety thickness, a quality described by that enigmatic notion of black snow.

Then there are the virtual spaces in the animated / live action films: the liminal passages from one room to another, or to and from different kinds of spaces altogether. These changes are reminiscent of the ascending levels in video games, except that the shifts in some of Akakçe's films are far more ontologically disorientating, not least because they can involve vast shifts in scale or the simultaneity of things of very different orders of magnitude: for example, at the end of The Measure of All Things we find ourselves on the sub-cellular level of something resembling a double helix of DNA, except with binary zeros and ones replacing ATCG code. This column ascends through the centre of a 360š panorama of the Manhattan skyline, which, it transpires, is little more than a circle of film drifting in space. It's as if Akakçe used a random combination of stills from Charles and Ray Eames' Powers of Ten (1977), their seminal filmic voyage from a proton to the furthest reaches of space, as the ordering principle for a synthetic, impossibly heterotopic environment.

We may feel on firmer ground viewing Akakçe's Minimalist films. Seen as stills, they look like they could belong in the company of Kasimir Malevich, Ad Reinhardt, Frank Stella and Robert Ryman. Their titles, too, evoke these artists' emptied-out canvases: Black on White and White on Black (2003), White on White (2003), Delicate Balance (2000). The experience of viewing Akakçe's films, however, represents quite a departure from the stasis of these luminaries' paintings, not least because the films' reductive forms appear to slide down and carousel around the projected image.

The 'beginnings' and 'endings' of the films strictly speaking they have neither seem absolutely empty: smooth planes of either black or white. This apparent emptiness begins being filled by an increasing number of repeated moving forms: simple ribbon- or hair-like stripes in the case of Black and White and White on Black and White on White, and more complex four-pronged forms in Delicate Balance. In the two films featuring stripes, these forms begin to evoke great depth, suggested by a gradual layering of stripes of varying degrees of thickness, and the various speeds and directions they move in. Eventually the density of stripes coalesce, the gaps between them disappearing to form smooth planes. In a Zen-like manoeuvre, a condition that evokes emptiness turns out to be its inverse: a state of absolute fullness. Although this 'emptiness' or 'fullness', for a moment, implies the kind of transcendence Malevich was after in paintings such as White on White (1918), no sooner are these states attained than they begin to splinter and fall away.

A lot of video art is designed to be shown continuously, it being a matter of little importance if the viewer arrives somewhere in the middle. That doesn't make them loops per se. Akakçe's Minimalist films are, in the strictest sense, loops, in that the 'beginnings' of these works are identical to their 'endings'. As actual loops they are contradictory: the forms in his films are forever in flux, but this flux always represents a return to the same condition. They operate like abstract palindromes.

The situation of the viewer in relation to the film is as uncertain as the question of whether or not we've reached the beginning or end when faced with blank white and black, and whether this represents everything or nothing. We are unsure whether this is a film of lines in descent, or whether we ourselves are ascending along a towering, static image, it's a woozy uncertainty not unlike the strange sensation of not knowing whether it is the train we're in that has begun moving, or the one alongside us.

This sense of being between states underlies all Akakçe's work. No entity is fixed and no category impermeable: all entities, be they human, social, digital, man-made or organic are in the processes of growing, multiplying, transforming, disintegrating, dying and reproducing. It's a world of seemingly endless possibility, where one need not subscribe to inherited patterns of behaviour, where it seems one may become anything simply by believing
in its possibility. It should be a realm of great beauty and hope, where desires and needs are forever met, but a sense of melancholy pervades these artificial paradises. The flipside to their expansiveness is a state of weightlessness, brought on, one senses, by a feeling of solipsistic alienation from others. The Measure of All Things was made in response to an invitation to contribute to an exhibition about the idea of paradise. Half-way through, Michael Vecchio's original soundtrack for the film gives way to Tony Bennett singing 'A Stranger in Paradise'. In its lyrics, the cost of 'ascend[ing] out of the commonplace', of being 'starry-eyed in paradise' is the condition of being a 'lost stranger' who fears being sent into 'dark despair'. Like the song, the beauty in Akakçe's films and drawings is treacherous.

The second half of another film, The Birth of Art (2003), features tulip-like forms floating and rotating balletically in a blurred, sepulchral environment that could be a Moreau-esque cathedral or grand mosque. Their petals are perfectly reflective, like so many things thought beautiful in culture precious metals and minerals, especially seemingly without substance in themselves. When they open up, the petals' undersides are suffused with a brilliant red, as we are ourselves under the knife. It's a red like the reds of all those jewel-like wounds in Western religious art, as beautiful as the flowers' polished silver exteriors. Akakçe's cyborg fauna don't symbolize suffering anywhere near as directly as anything in the service of religion, of course, but there's still a cruelty to their elusive opulence that makes them digital descendants of Baudelaire's fleurs du mal.