Activism and animation, Henry Darger and the 'War on Terror' 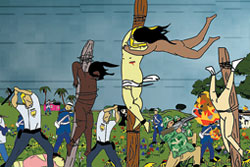 Once the inevitability of Bush’s march on Iraq became clear, the Chicago-based group Voices in the Wilderness arranged for artists and journalists to go to Baghdad and document the destruction. Paul Chan spent two months there and came home with video journals and hundreds of photographs of local residents. In the lead-up to the pre-war protests Chan and a few collaborators chose 30 of these anonymous portraits and posted thousands of copies around Manhattan, each image captioned simply with the date it was made and the word ‘Baghdad’.
The project’s power lay in its similarity to the ‘Missing Persons’ flyers that papered the walls of New York like ad hoc memorials in the days following 11 September. A slide-show Chan made using his Baghdad pictures documented the common humanity of these people, on whose homes the US government was about to wreak havoc. Whether it is useful to call these projects art is beside the point, although Chan does try to distinguish between his work as an activist and an artist. What he perceives as the relative impotence of contemporary art, regardless of the political resonance of some of his pieces, seems to render art-making impossible as an end in itself. The fact that the economics of the market afford certain political and ironic opportunities, however, is not lost on Chan. When an Iraqi family he met in Baghdad was looking to escape the chaos, he sold some art works to raise funds for their trip: prints of The People’s Guide to the Republican National Convention, a map he and some like-minded associates calling themselves the Friends of William Blake had designed and distributed to protesters attending New York’s Republican National Convention rally. In addition to listing conveniently located toilets, the detailed tourist map-cum-agitator’s-guide included useful facts such as the addresses of local Republican Party corporate sponsors, the headquarters of assorted multinationals, the hotels of the various delegations, and legal services.
Chan’s gallery-based work focuses on video, though his début at Greene Naftali Gallery in New York last autumn also included a wall of charcoal drawings, and a sculpture of a toy pistol that concealed a speaker in the barrel’s tip. (To hear the faint sound, viewers pointed the gun at their heads.) His website, nationalphilistine.com, hosts portions of his video work with online components of certain projects. Visitors familiar with his 2002 video Re: The Operation, for example – an allusion to the infamously contrived G.I. ‘letters home’ actually written by members of the Bush administration – can also download desktop portrait icons of key administration operatives maimed by their own ‘War on Terror’.
His two most powerful pieces are digital animation projections structured around Utopian desires and dystopic fantasies but depicted in a mode of apocalyptic Pop realism. Happiness (Finally) After 35,000 Years of Civilization – After Henry Darger and Charles Fourier (1999–2003) pulls together imagery culled from the janitor’s escapist little girl epics and the French Utopian socialist’s evolutionary chartings of the future flows of civilized happiness and bedlam. The girls frolic across a beautifully drawn landscape, eating flowers, defecating, having sex and being tortured by soldiers before they achieve ultimate victory in the battle against their oppressors.
My Birds… Trash… The Future (2004) features Pier Paolo Pasolini and Biggie Smalls (both murder victims) set in a lonely landscape amid suicide bombers, birds from the book of Leviticus being shot by hunters, and camera-snapping tourists in yellow Hummers. Both pieces feature richly evocative sound-tracks – bird-song, wind gusts, car alarms and mobile phones – but their repetition, pacing and juxtaposition against the jerky faux primitivism of Chan’s South Park-meets-early-Nintendo style of digital rendering is disquieting. The slow-paced action of My Birds centres on a bleak tree that recalls both Godot and Goya, whose respective Absurdist waiting game and disasters of war fit all too well with our contemporary anxieties.
What makes My Birds a pointed grotesquerie of contemporary American life is the contrast between its lack of emotional texture and the violence it depicts. As in the video games Chan’s graphics mimic, his protagonists act without a hint of pain or desire. If it was all a game, you could stop playing; but in a terribly familiar way the lunacy seems locked on autopilot.
The aesthetician Elaine Scarry noted that imagination helps provoke action, albeit on a smaller scale than what a dream demands: if you imagine Utopia, help build a country; if you imagine a city, build a house; if you imagine a house, make a brick. Paul Chan’s activism suggests that if you imagine a more tolerant and self-aware society, you might first immerse yourself in the one your own is poised to annihilate. But it is Chan’s creativity that suggests that, if what you imagine is freedom, you make art.