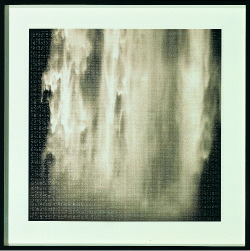 In 1893 Arthur Conan Doyle published what he intended to be the last Sherlock Holmes story, the moral of which seems to be: don't go chasing waterfalls. The Final Problem sees the enigmatic sleuth apparently plunging to his death from the top of the Reichenbach Falls. Dr Watson waxes poetic on the rolling, vertiginous horror: 'the long sweep of the green water roaring forever down, and the thick flickering curtain of spray hissing forever upward, turn a man giddy with their constant whirl and clamour.' Watson's rapt gaze captures a late apparition of the Romantic Sublime ('the sounding cataract haunted me like a passion' wrote William Wordsworth), which sees the waterfall as a fearful image of the frailty of memory and imagination.

Paul Schütze's waterfalls are, if anything, still more disorienting. His footage of the Skogafoss waterfall, near Reykjavik, is run backwards in the twin DVD projections that make up Dreaming Camera (2004), so that the mad flux of water and vapour starts to look like ceaselessly ascending smoke or some weirdly ectoplasmic emanation, a phantomic drapery always about to rise and reveal its dark geological secret. Mounted opposite each other, these walls of levitating fog refuse to freeze into a memorial - even if abstract - snapshot, so that you turn from one to the other with the impossible recollection of a single static image, only to have it atomized again into a rimy haze. Dreaming Camera quickly plunges you into Holmes' final view of the falls, as if the room were rising around you as you reach for the last fugitive foothold of a graspable image.

The dizzying edges of the Dreaming Camera frame a work equally alive to the misted depths of memory and perception, even as it seems to have beaten time and narrative to a single, silvered plane of words. On the black ground of the wall between the luminous falls, Walled City (2004) replicates the entire text of Alain Robbe-Grillet's novel Topology of a Phantom City (1976), its sentences diverted 90 degrees from the horizon of the page so that they stream in glittering verticals. All punctuation and spacing have been removed; a small increase in the size of the type denotes the beginning of each word. The effect is like a demented optician's eye test, the text rendered in gargantuan negative: the hapless patient is asked to make sense of a verbal field that has suddenly exploded into a constellation of twinkling nonsense, a confusion that still demands to be read in the odd peripheral glint of meaning. Walled City turns Robbe-Grillet's already taxing nouveau roman into a single precipitous instant, as if a novel were something you remembered not as the unfolding of a sequence or story in time but as a space, a volume, an architecture recalled as a palpable, enclosing physical presence.

Words and water come together in Forgetting I and II (2003) - random frames of the waterfall footage overlaid with a sundered (again vertical) text, stray single letters of which have been excised from the first image and arranged (still in their proper place) on the second. To read these texts correctly, you'd need to be possessed of an extraordinary recall, to grasp one grid and fantasize its perfect reinsertion in the other. The feat is, of course, impossible. Instead the letters hover over the images of falling (or ascending) water, casting mute and immemorial shadows on the movement of a substance that is already an image of the instantly forgotten.

In her classic study The Art of Memory (1966) Frances Yates traces the history of a long argument about whether a perfect memory would recall words or images. Both impulses, Schütze seems to suggest, are doomed. Rather, the palace of memory - as in The Museum of Absence (2002), his eerie nocturnal film of the Royal Museum for Central Africa, near Brussels - houses merely the record of its own failure to grasp the essentials.