The Bacchanalian birthday festivities of a true Bohemian 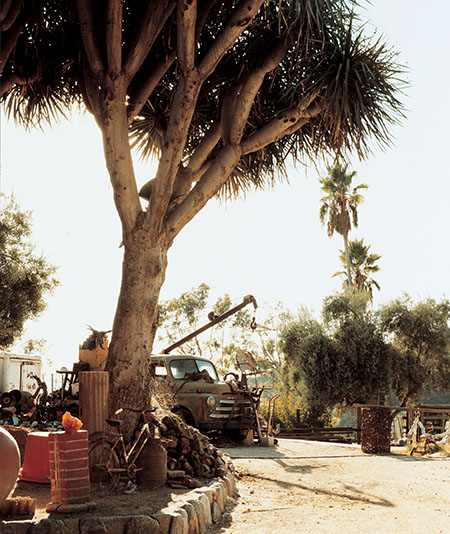 Just before summer bears down on LA, a crowd gathers on a choice piece of sprawling real estate in the Pasadena hills. From late afternoon until early morning, buses climb up and down the narrow, winding road to the fantastic, ramshackle compound of our bohemian hosts, the Armenian émigré artist Colonel Jirayr H. Zorthian and his millionairess wife, Dabney. The site is an architectural folly that outperforms even Peter Jackson’s sets for Lord of the Rings.

Some years ago Zorthian ran a day-care facility for local children – they would be driven up to his property in a green-painted bus and allowed to run wild in the country, ‘expressing themselves’ with any material on hand, until their parents came home from work. These days it’s a haven for the artistically inclined at the end of their financial tether. The precipitously dipping and rising landscape is dotted with ad hoc shelters – houses built around trees whose branches jut through windows – constructed from every available material. Piles of bricks and boards are everywhere, apparently free for the taking.

At the centre of it all is the Zorthians’ own home, a marvel of free-form construction that appears to be imploding and exploding simultaneously. Elsewhere there is evidence of farming and animal husbandry – a new society rising up from the ruins of the old, a new republic with artists in charge. The Colonel’s own practice is suitably protean, embracing architecture, sculpture, painting and even performance. It is the content that holds it all together: there are crazy quasi-Cubist nudes everywhere, their curves cut from rusty sheet metal and welded on to tent pegs that tear at your clothes as you pass. The beauty of the female form is Zorthian’s raison d’être, and tonight it is ours too.

It is Zorthian’s 92nd birthday and, as on each previous such occasion, he will dispense with Platonic commemoration in favour of Dionysian rebirth. At a certain moment in the festivities he appears on a makeshift stage, attired in an approximation of Bacchus with a ceremonial wreath on his balding scalp. It is a kind of tableau: he reclines on a divan, while a procession of ‘nymphs’, naked and seemingly driven to a state of sexual delirium by the old scamp, join him and begin to dispense grapes and a cooling breeze via palm fronds. Thus every year – in an event that is classic Californian weirdness of an increasingly rare kind – Zorthian is transformed into, as he puts it, ‘Zorbacchus’. Cheers.