In The Poem About Love You Don't Write the Word Love 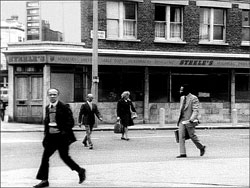 The overwrought title of this show – ‘In The Poem About Love You Don't Write the Word Love’ – sounded like a manifesto for metaphor. In fact what curator Tanya Leighton’s selection of works shared was the desire to explore slyer forms of political engagement via the sin of omission. The exhibition was almost essayistic in making the case that political art should not be a finger-pointing, heart-on-sleeve affair. The works’ strategies were crablike; the enemy was the literal because, the show suggested, there is no such thing.

The exhibition, comprising works by over 30 artists, was characterized by films, folds and fictions. Of the many moving image works, spread across the gallery and CCA’s cinema programme, Walid Raad/The Atlas Group’s and John Smith’s might be emblematic. Raad’s I Only Wish That I Could Weep (2000) is a compilation of video sunsets filmed on the seafront in west Beirut, wrapped in the fiction that the footage was shot by a sentimental member of the Lebanese security forces. In Smith’s The Girl Chewing Gum (1976) an east London street scene has a voice-over that seems to direct all the actions of the people and objects on-screen, turning random bustle into careful choreography. While in many respects antithetical, both works use their droll, unnerving narratives to foster a disbelieving curiosity in the face of everyday, ephemeral surfaces. Even complete fidelity to the facts can be harnessed to decidedly subversive ends, as in Sharon Hayes’ videos (provided in take-away form) of her reciting from memory four messages originally recorded by Patty Hearst while held hostage by the Symbionese Liberation Army. With a pedantic off-screen chorus pouncing on any tiny deviation from the original, Hayes’ performances make you wonder if the spirit can survive literal representation.

The folds were best exemplified by François Bucher’s Readymades with a Fold (2004), which consist of little else: photographs of magazines folded to juxtapose ads and earnest features, cover and contents. Images bleed when this ‘pornography of proximity’ is laid bare: a Paris Hilton porn video facing off with an Abu Ghraib image, a shot of the Israeli ‘security wall’ and a publicity photograph of a celebrity trapped in a bubble. They doodle enjoyably with the crass conventions of segregation, while perhaps sacrificing a little of their bite by taking the form of high-gloss digital photographs rather than being exhibited, lepidoptera fashion, as splayed objects.

There was a strain of the baroque in the show, taken up in works such as Lucas Ospina’s Manrique Versus Ospina: In A Poem About Art, A Curator Doesn’t Write The Word Curator (2005). Ospina, in the spirit of Jorge Luis Borges’ reviews of non-existent authors, presents a show-within-the-show about the fictional artist Pedro Manrique Figueroa, ‘precursor of collage in Colombia’. But the tendency towards the intricately oblique was most elaborately and brilliantly displayed in Gareth James’ Get Real Estate (2003), a work that served to knit the whole show together. Three plywood tables support Perspex cubes, each with a two-way mirror on one side, containing complicated origami sculptures: a half-collapsed building, a truck surrounded by ring-fencing and a collapsed dome. Three pencil drawings on the wall look like floor plans but can eventually be discerned as implausible diagrams of how the sculptures were cut from single sheets of paper. Opposite them are two framed newspaper pages, which contain the source images for two of the sculptures: a report on a collapsed dance floor in Jerusalem and an article about a Garibaldi memorial in New York. But again content bleeds, so for example Sweat Equity (2004) the title of the sculpture based on the Garibaldi memorial, is derived from an article on self-build housing which appears on the same page of the newspaper. With its complex imbrications, delicate display and labyrinth of allusions, Get Real Estate looks as much as anything else like an impossibly ambitious attempt to fold together all the contradictory elements of Hans Haacke’s oeuvre, from Minimalism to property polemic.

More than any other artist in the show, James seemed to match the curatorial desideratum, nodding to early Conceptualism, while married to political content. (The number of alumni from the Whitney Independent Study Program involved, including Bucher, Hayes and James, suggested a certain lineage.) Leighton’s target was also obvious; the many documentary-makers manqués and soapbox preachers currently trading as political artists. The alternative proposed is playfully high-minded, though a world away from relational pieties. Perhaps Leighton herself, in a catalogue text that invokes the French critic Serge Daney’s distinction between the ‘image’ and the ‘visual’, is more programmatic than the art she puts forward; but she has staged a show that seriousl challenges prevailing trends and makes a credible case that ‘commitment’, in straightforward terms, is a canard. Art’s battalions advance in motley array, and their engagements are rarely decisive.