The Poet and the Jailer: Cracking the US Prison System

Neither a straightforward scholarly book nor a squarely literary experiment, Jackie Wang’s Carceral Capitalism, forthcoming from Semiotext(e) in February, confronts mass incarceration in the US by delving into the processes that feed into and maintain the prison system: anti-black racism, predatory lending, algorithmic policing, privatized prisons, credit scams, data analytics and histories of exclusion. Its argument is trenchant, but it’s also beautifully written; it slides between topics with conceptual agility and stylistic flair, tying histories together without conflating them. In this way, Wang is able to build a complex portrait of systemic violence while avoiding overwhelming paranoia. The result is a book that moves between bleak but clear-eyed analyses and, occasionally, surprising moments of hope.

Today, Wang argues, supposedly ‘race-neutral’ technologies (credit scoring, data mining, law enforcement software) justify and continue long-standing racist policies, providing them with a veneer of scientific legitimacy. Moreover, such faux-objective, technocratic practices are a means of rationalizing expropriation: states, cities and municipalities attempt to solve their budgetary dilemmas by extracting money from residents – in the form of fines – and building their local economies around policing and jails (while the budgets for infrastructure and services are cut). Along with an ideology that holds up the computational as disinterested and unbiased, these policies are buffered by dominant discourses that frame poverty and incarceration as matters of personal responsibility. The burden of recurrent capitalist crises is thus recast in moral and rational terms and shifted onto the shoulders of the poor:

‘Having a bad credit score is seen as a moral failing rather than merely an index of structural inequality … I hold that risk is a new colour-blind racism, for it enshrines already-existing social and economic inequalities under the guise of equality of opportunity … Furthermore, risk scoring is a practice that fractures the population into the categories of deserving and undeserving.’

While this analysis goes a long way toward examining the social logics that uphold mass incarceration, Wang takes the argument further; she continually spins her inquiry in new directions. Through parallel discussions of credit scores, which don’t simply record one’s economic history, but supposedly anticipate one’s future behaviour, and algorithmic policing, which forecasts future crimes based on the location of past crimes, resulting in the increased policing of certain areas, Carceral Capitalism forefronts how technocracy is not merely analytical, but predictive: criminality and poverty are self-fulfilling prophecies of capitalist rationality.

Wang incisively argues that debt (personal, corporate and governmental) structures contemporary inequality. Debt too appears as neutral accounting, but functions as a means of extraction. Wang writes, ‘When observing the economic life of the United States, we see that at every historical juncture, debt has been racialized.’ As a recent example, she points to the disproportionate targeting of black and Latinx borrowers for subprime loans. The U.S. is built on a history of racial exclusion, but debt is an illustration of how the country now also functions by what Wang calls ‘expropriation through financial inclusion.’ This embeds racism in economic policy. When inequality is arranged as a convoluted set of financial mechanisms, it’s hard to fight. It’s difficult to even see, for the people who aren’t directly experiencing it:

‘The violent foundation of U.S. freedom and white safety often goes unnoticed by those who live in relative safety because their lives are mediated in ways that have rendered that violence invisible or, when visible, may be considered legitimate and fail to register as violence (such as the violence carried out by police and prisons).’ 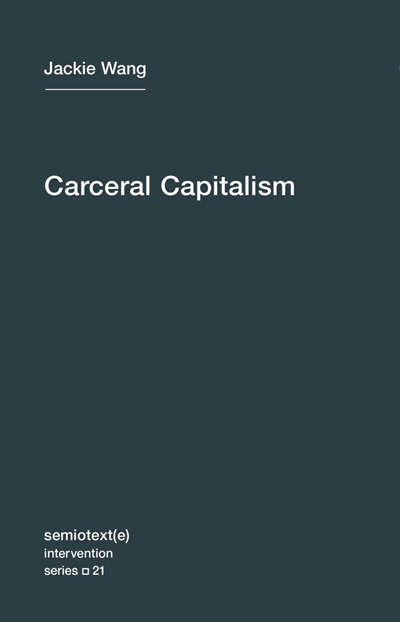 The invisibility of violence allows white Americans to imagine themselves as innocent, and to understand crime and punishment as matters of individual morality. Wang stages this insight from a variety of formally incongruous angles, from rigorous explanations of financial processes to freewheeling experiments: there’s a chapter recounting the story of her brother’s incarceration, a script for a performance about Robocop, and a chapter that collages quotes from radicals and abolitionists. And the book ends with a poem.

After recapping a book about expropriation and death, it might seem crass to discuss aesthetics, but the book’s form is part of its argument – it’s not possible to see systemic violence from an objective position, one has to examine it through a series of partial views. Some of those views are factual and historical, some are abstract and theoretical, and others are opaque and experimental. But perhaps most importantly, the formal variation is a rejection of paranoia: Wang elucidates a system, but she’s also affirmative of writing, dreaming, and possibility, which are cracks in that system. In the final chapter, she quotes the Palestinian poet Mahmoud Darwish on the prisoner’s freedom to dream and the guard’s reduction to ‘pointless eavesdropping’. Wang responds: ‘The profession of the poet is dreaming. The profession of the jailer is to contain. The poet is the one who makes the light. The guard is the one who takes it.’