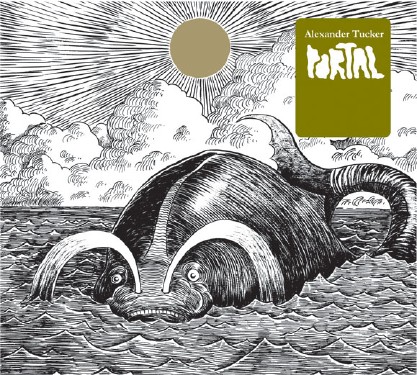 London-based musician and artist Alexander Tucker’s third album, Portal (2008), has been the perfect complement to the rain, wind and gloomy skies of the past few months. The music is fulsome and thick, like the air before a summer thunderstorm; it has moments when you never think its waves of heavy, repetitive drones will end, and yet Tucker’s ear for unusual harmonic assonance and down-home folkish instrumentation gives his sound a lushness as vivid as a garden full of rain-drunk plants. Its cover, too, suggests similar contrasts – Tucker’s drawing of a huge kraken rising from the ocean almost looks friendly, but he has rendered it in the style of an old sea chart warning mariners of fathomless depths where ‘here be monsters’. The tug of old against new is a defining feature of Tucker’s work. Layers of pastoral acoustic guitars, mandolins and rasping strings circle and swoop above droning washes of guitar the texture of tar and grit. His wavering tenor, although not particularly strong, makes simple phrases on tracks such as ‘Here’ sound like a cultish incantation; on ‘Poltergeists Grazing’ and ‘Omni-baron’, it evokes the Indian ragas that influenced so much music of the 1960s, and sounds as if it has drifted in on the airwaves from some lost British psychedelic album by, say, early Pink Floyd or melancholy singer-songwriters such as John Martyn or David Crosby. Yet Tucker’s work is by no means fixated on rock heritage or on narrowly replicating the glory days of folk and psychedelia. In the late 1990s he was a member of Kent-based band Unhome, in whose music could be heard traces of contemporary American post-rock groups such as Slint, Papa M (with whom Unhome released a split 7-inch single) and Tortoise; groups who deconstructed conventional guitar-bass-drums line-ups to create slow, plangent music evocative of the vast American landscape, or introspective emotional states. The post-rock blueprint is still identifiably present in Tucker’s solo work, yet so too is minimalism, in the way his phrases repeat and loop over each other in intriguing patterns. However, the music has a homegrown warmth perhaps more reminiscent of Terry Riley’s laid-back, West Coast approach than Steve Reich’s or Philip Glass’ more metropolitan, architectural-sounding work. Since his first eponymously-titled album, released in 2000 by Tom Greenwood of haphazard US experimentalists Jackie-O-Motherfucker, Tucker has increasingly become a fixture on the leftfield music circuit. He regularly collaborates with Stephen O’Malley of Sunn 0))), and in 2005 contributed the soundtrack for Lali Chetwynd’s performance at the Tate Triennial. Yet despite having impeccable indie credentials, his music doesn’t get lost in the shadows of influence. On Portal his vocals are mixed relatively low, allowing for the evocative space opened up by his song titles – nods to the supernatural and nature in ‘Poltergeists Grazing’ or ‘Energy for Dead Plants’, for example – to remain open, never closed down by over-determined lyrics. His songs carry the listener into an uneasy reverie, the music at once beguiling but brooding; a listening experience akin to watching the rain and praying it will not turn into a deluge.