Blurry phantasms between abstraction and figuration 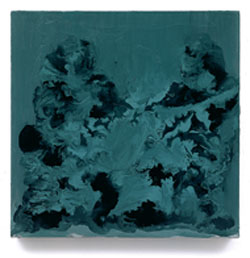 To give a rough summary of an old theory: in painting you have paint and you have illusion. The choices a painter makes imply ideological, aesthetic or discursive priorities, but certain key moments in the last century – Philip Guston’s Ku-Klux-Klan paintings or Gerhard Richter’s abstractions – reveal these decisions as surprisingly emotional and divisive. Amsterdam-based painter Rezi van Lankveld takes this either/or as her subject. Her works stage the shift in the spectator’s mind from consciousness of the pictorial scene to consciousness of the process that created it, and deftly evoke the sense of melancholy that accompanies this course – which is, in the end, one of literal disillusionment.
Oscillating between abstraction and figuration, van Lankveld’s paintings present Old Masterish compositions which appear, just barely, as blurry phantasms. At her recent show at London’s Approach gallery she exhibited chunky works at both history-painting size and smaller scales. Her palette is wonderfully, hilariously, Dutch: the shaded blues and muted greys of a room in winter. (She graduated from the Jan van Eyck Akademie in Maastricht, and her works indeed feel steeped in age.) The paintings strike a note of sadness and – despite the copious amount of paint they bear – appear understated and refined.
Van Lankveld’s method of approach is to lay wooden boards on the floor and pour layers of oil paint onto them. Riding chance, she works through the patterns made by the paint until an image emerges, often returning to the floor and starting afresh with a new colour until she finds the one that suits. Traces of this exploratory process persist on the sides of the board – in bright multicoloured drips of dried paint – and in the thickness of the impasto of the painting’s duo-tone surface. On the finished surface as well, brushstrokes and droplets attest to the spontaneity of her technique, recalling the contingency of the event – that the image so easily might not have existed.
The balance van Lankveld accomplishes between representational and gestural elements remains fraught, and her compositions teeter on the verge of illegibility. In this respect they recall the paintings of Cecily Brown, who similarly addresses the conflict between paint deployed and scene depicted. But van Lankveld works with a much tighter vocabulary: she limits herself to two colours, to the most basic indications of painterliness (brushstrokes and paint drips), and her figures are featureless and vague. This restraint concentrates the conflict between medium and depiction directly on the figures themselves, rather than its being scattered like decoration across the painting’s background. In her strongest paintings the artist keenly explores the contested regions where the painting functions as both representational and abstract. In Family (2004) swirls of paint accumulate in the centre of the board to suggest a couple embracing. Conversely, the painting can be read from the inside out: where the ‘edges’ of the couple – their backs, their entangled legs – then dissipate into swirls of abstraction. Van Lankveld stalks an unrelenting ambiguity, never allowing either the mimetic or the Modernist impulse to triumph decisively over the other.
Certain works thematize this conflict: in Don’t Stop (2004), for example, two figures are embroiled in a tug-of-war, and in Give and Take Twist and Kill (2004) a chubby face struggles to emerge from the brushstrokes raked across the board. A sense of spent violence permeates all the images – Ideas of Solution (2005) shows a woman’s face lying inert on its side, eyes open and an errant slash of paint through her cheek.
Obviously van Lankveld’s technique of pouring and dripping onto a horizontal canvas reprises Jackson Pollock’s, and such a notion of painterly practice is equally her subject matter. Her paintings present themselves as the culminations of a tactile process – they are the image and everything that has gone into making them. It is curious to note that they often resemble textbook examples of indexicality: Rorschach ink-blot tests, rayographs, marks of bodies pressed into paint. Satellite (2005) seems the ghostly imprint of a face tilted back: Veronica’s shroud in oil on board. Testifying to their physical genesis, the impastoed surface and gestural swirls behave less as knowing allusions to Abstract Expressionism than as vital records of the artist’s trust in her method – that it will conjure an image worthy of representation.