BY Barbara Casavecchia in Features | 01 MAY 11

B
BY Barbara Casavecchia in Features | 01 MAY 11

In 2004, Rossella Biscotti daubed the phrase ‘La cinematografia è l’arma più forte’ (cinematography is the strongest weapon) in black paint on the walls of the Fondazione Olivetti in Rome. It was the slogan used by Benito Mussolini in 1937 to open the Cinecittà studio in Rome, which was built by the Fascist Ministry of Popular Culture in order to exploit the newest mass-medium as a powerful propaganda tool. Mussolini wasn’t particularly original though. Twenty years earlier, as Biscotti recently reminded me, Lenin had declared: ‘Of all the arts, for us cinema is the most important.’ Set against the backdrop of a country that has been described as a videocracy (one in which the power of the image dominates society) and ruled by the unbridled media tycoon Silvio Berlusconi, Biscotti’s wall painting was a blunt warning about the political situation in Italy and the risks involved in its strategically crafted entertainment.

In his seminal book A Grammar of the Multitude (2001), Italian philosopher Paolo Virno argues that, within the society of spectacle, communication itself has become an industry. For Virno, the culture industry is the matrix of post-Fordism, a sector ‘in which there is “production of communication by means of communication”’. Biscotti’s practice can be read as an ongoing exploration of this idea. In this sense, La cinematografia … was also a self-critical gesture, given that cinema is also Biscotti’s ‘strongest weapon’: not only because she makes films and videos, but because she adopts a cinematic aesthetic. Her modus operandi is based on research, script-writing, the creation of montages, and editing. She systematically focuses on the reconstruction of narratives where collective and individual viewpoints collide – for instance, she referenced the 1986 Chernobyl disaster in her installation The Sun Shines in Kiev (2006) which comprised a video, three slide-projectors and a poster that reconstruct the life of Vladimir Shevchenko, the first filmmaker to document the disaster. ‘I see,’ she says, ‘several of my works as performances. I find them interesting in relational terms, because of the reactions they elicit from the public.’ Biscotti’s scrutiny of the spoken word and frequent use of materials based on testimony and police interrogations address the impossibility of establishing a single truth, be it through psychoanalysis (which she focused on in her 2009 installation A short story about memory, pentothal and dreams); ideology (which, in collaboration with Kevin van Braak, she alluded to in The Library, 2010, a work comprising 590 Soviet-published books that were thrown away by the University of Vilnius); or state justice (Il processo, The Trial, 2010–ongoing).

Biscotti is completing her studies at the Rijksakademie in Amsterdam, and it was during its 2010 Open Studios that she presented the first version of Il processo, the most overtly political of her projects. The title refers to both Franz Kafka’s posthumously published 1925 novel and the infamous trial held in Rome in 1983–4 of over a hundred intellectuals, writers, teachers, professionals, and members of the radical group Autonomia Operaia – among them, Antonio Negri and Paolo Virno – who were accused of terrorism and producing ‘antagonistic and subversive’ communication; the press added their weight to the witch-hunt. Biscotti isolated a series of audio fragments of the trial and had them translated and typed in English by two performers. She told me that her goal was to reflect upon ‘the loss of information, the ambiguity of reconstructions and the possible use of this material’. When she exhibited Il processo at maxxi in Rome (where Biscotti was awarded the Premio Italia Contemporanea earlier this year), the work comprised an audio installation (eight hours of looped court hearings) and a set of reinforced concrete casts that reproduced elements of the original courthouse; it’s a place with a loaded history. Designed by Rationalist architect Luigi Moretti during the 1930s as a fencing school for the Foro Italico sports complex, in the 1970s it was fortified and turned into a high-security structure (commonly known as Aula Bunker), which hosted major trials of the so-called anni di piombo (years of lead – a reference to ubiquity of bullets at the time). A few days after the opening, Biscotti gave an undocumented performance behind closed doors by inviting a group of ex-defendants, their families and some friends to meet at the courthouse. When a month later she staged Il processo again at the Furla Prize in Bologna, she asked a professional interpreter to paraphrase in Italian, in real time, an edit of the audio excerpts, in order to provide a new, simplified version of facts. Which is exactly what much fiction, cinema and mass entertainment does, while skirting the gaps, omissions and bias of history. 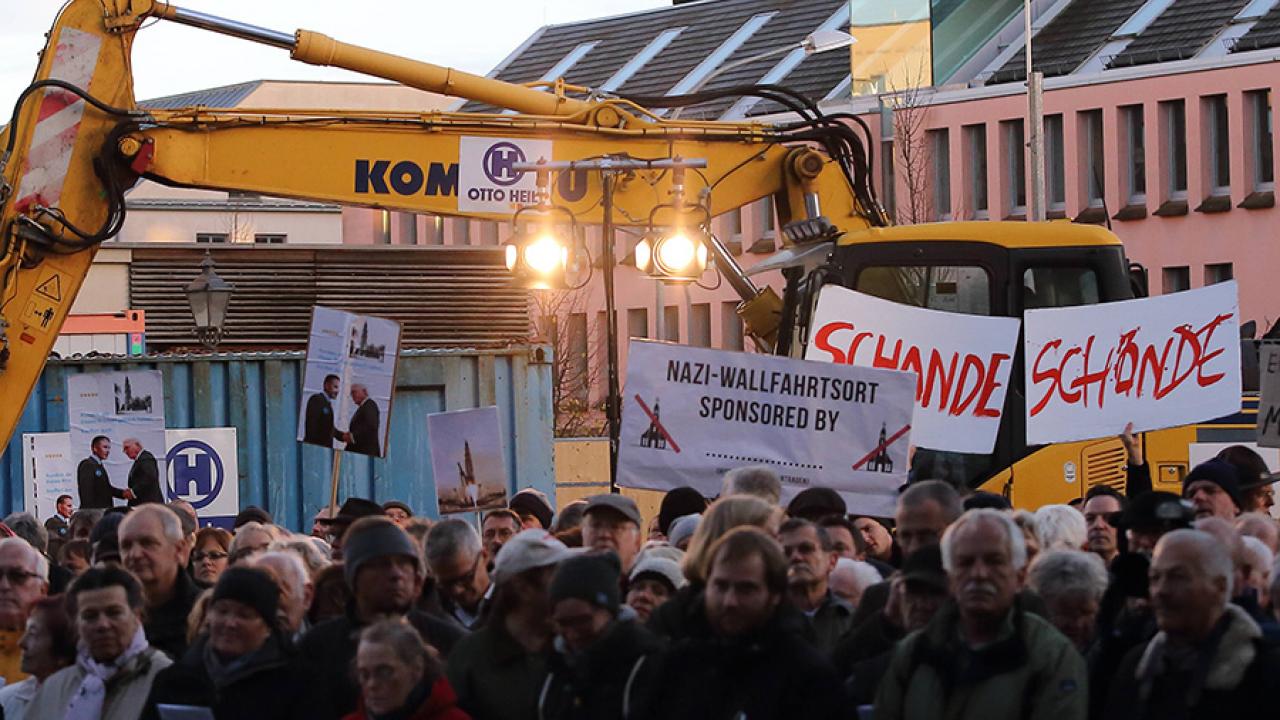 Ahead of eastern Germany’s elections, Philipp Oswalt, the former director of the Bauhaus Foundation, on today’s right-wing intervention into historical architecture