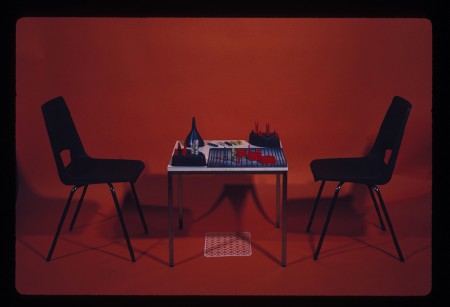 You could say that, since the late 1950s, Roy Ascott has been preparing viewers – and, as a ground-breaking teacher, his students – for the digital age. For the last 50 years the British artist has been envisaging a mechanistic form of art governed by exchange and interaction, a strategy that now feels very current. Guided by cybernetics and systems theory, many of his early installations were effectively devices for communication, though they were produced at a time when the first building blocks of the Internet were still being assembled in the labs of UCLA and the Stanford Research Institute.

Throughout April and May, Plymouth Arts Centre is presenting ‘The Syncretic Sense’, a retrospective of Ascott’s work. Beginning with the ‘Change Paintings’ (1959-61), which allows viewers to re-order a series of Plexiglas slabs to create new images, the exhibition goes on to consider Ascott’s development of telemetric art via computer networks.

Importantly, ‘The Syncretic Sense’ addresses an easy misconception about this work: that it demonstrates little more than a science-orientated interest in computer networking. For Ascott, telematic art has always been part of a larger syncretic puzzle, in that he approaches the terminal screen, the modem and the virtual realms they provide access to as tools for other activities. ‘All along, my interest has been more in the connectivity, and actually not even that, more the idea of consciousness – that’s the only way you can put it,’ he explains, when I meet him at his home in Bristol. ‘I speak very carefully about the spiritual because, in our culture, that gets rubbished very quickly, but that’s really what interests me, that there is a spiritual implication to this technology […] it’s a desire, a desire to be with people.’

Social networking sites and online virtual worlds such as Second Life have turned many of Ascott’s early concepts into mainstream reality. For his 1983 project ‘La Plissure du Text’, for example, a group of artists around the world used modem-equipped computer terminals to collaborate on an asynchronous storytelling project – some of the print-outs from which are shown at Plymouth Arts Centre. ‘You could take up any sort of position, what went in led to other things […] Someone would send in half a joke in French, someone would try to understand it in English, the whole thing was constantly mobile […] I think that’s what happens with Facebook. You can get lost in threads of conversations and social circles.’ Ascott’s most prescient work explores the possibility of distributed authorship, of a telematic art form with no hierachy. This is now being realized in the wider web community with groups of gamers meeting online to create their own designs and through other fashionable techno-cultural expressions, such as the phenomenon of ‘flash mobbing’, which is often organized online.

Through the current fetishization of industrial design, even Ascott’s controversial approach to art education may be more acceptable now. Famously attended by Brian Eno and Pete Townsend, his seminal Groundcourse at the Ealing and Ipswich Art Schools sought to reinvigorate art education as a cybernetic process. As Ascott explains, ‘it was a two-year course and the first year was all about changing preconceptions – how you look, how you see, how you draw. For the second year, the students made a kind of mind map of how they saw their relationships to the world, to God or to each other, whatever their model was. Then they designed a calibrator that would fit in with their theory of what a human being was.’ Apparently, the students would then live in accordance with their life calibrators, restricting themselves to the activities they included in their diagrams. ‘Pete Townsend sat on a trolly for three weeks, because he wasn’t allowed to use his legs’, recalls Ascott. ‘Eno went around with a bag on his head.’ When he later attempted to repeat the experiments at the Ontario College of Art, Ascott was dismissed. ‘This was 1970 and to say the least Toronto was not quite ready for it.’

These days, Ascott is mostly engaged with out-there theories drawn from quantum physics and holonomic brain theory. He enthusiastically posits a post-human future; through ‘moist media’ – his own term for the emerging science of biomechatronics and cybernetic organisms – he envisions the combination of biological and technological systems. Ascott sees an end to art’s preoccupation with the body in favour of technoetic freedom. ‘My central interest has been in biophotonic processes, concerning the quantum coherence of organisms,’ he says when I ask about current practical projects. ‘Within my field of speculative research, theory is practice’. I think it’s going to take us 30 years to catch up again.