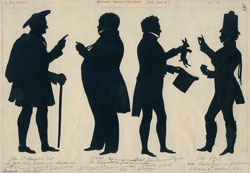 Spanning a period stretching 100 years either side of the invention of photography c. 1840, this small display at the National Portrait Gallery focused on the popularity of silhouettes as portraits; from hand-painted profiles of royalty in the 18th century to Victorian fun-fairs advertising ‘Automaton Artist’ machines, producing ‘warranted likenesses’ and seaside portrait-cutters in the 1920s and ’30s. The silhouette, unlike the photographic image, is shown to occupy a representational order somewhere between abstraction and figuration, providing a specific likeness that also courts associations with antiquity in the form of Egyptian profile portraits or busts on coins and medals. Early works often derived from the theories of Johann Lavater in his Essay on Physiognomy, for the Promotion of the Knowledge and the Love of Mankind (1772), which attempted to make concrete these associations with a pseudo-scientific treatise reading the facial profile as the reflection of the soul, according to universal principles.
Kara Walker’s appropriation of the silhouette form to explore issues of race, class and gender in terms of colonial history was thus cited as a contemporary and critical motivation for the show.Walker has described historical silhouette portraits as ‘black holes’, pointing to the clichéd nature or inadequate representation of black history and suggesting that the identities she reconstructs in silhouette form are intentionally ambiguous. But broader relevance for these rarely seen works from the National Portrait Gallery’s collection derives from the work of younger artists who are not represented in this show. David Thorpe and Piotr Uklanski have both borrowed the charm of the silhouette to make dark, romantic images; Lucy McKenzie, self-consciously of the generation after Gerhard Richter, has looked outside photographic realism towards simplified representational codes, such as Soviet poster art from the 1930s or cartoons. McKenzie, and her frequent collaborator Paulina Olowska, have returned a number of times to the silhouette form as a means of representing the human figure with a different weight or investment.
The display began with an illustration by Francesco Bartolozzi, after Benjamin West, of Pliny the Elder’s legend attributing the first portrait drawing to Dibutade, the daughter of a Corinthian potter, who used chalk to trace the outline of her departing lover’s shadow onto a wall. Bartolozzi’s c.1780 etching twists the couple into an efficiently intimate embrace that permits the lover to hold aloft a lamp that casts his shadow onto the wall while she dexterously traces it. The image serves as a kind of allegorical epigraph to the display, foregrounding the emotional basis of technological attempts to record a person’s presence.It also posits the silhouette portrait as an authentic form of realism, in that its shape marks out the actual physical space that the subject has occupied and subsequently left.
The strongest work appears to have been made just prior to photography’s invention. Nineteenth-century experiments by master-cutter Augustin Edouart, who worked in frieze form to depict famous figures posed with furniture and props, compress narrative and visual information in an ingenious way. A series of nine silhouettes from 1828 of Charles Simeon, an Evangelist preacher, capture the subject in different attitudes in the pulpit: gesturing towards heaven, finding a passage in the Bible, theatrically praying. The sequential nature of these ‘snapshots’ gives them a resemblance to a photographic series, yet their design form pulls back from such incidental detail and imply an essential set of character positions distilled from real-time observation.
The exhibition ended with Brighton Pier silhouettist Hubert Leslie’s drawing of Peter Pan, inextricably bonded to his devilish-looking shadow. In this well-known story Peter’s shadow represents a concrete link to physical existence in the real world. That he is unable to shed it signifies his corporeal actuality. Contemporary visual culture is saturated with the fantasy of perfect, immaterial bodies afforded by photographic technology. This display makes visible the fact that the silhouette form offers instead a representational shape that is a thing in itself: an individualistic ‘logo’ fashioned from compacted visual information. Pertinent to the concerns of the artists I have mentioned is the formal relationship between its relatively crude method of registering a ‘likeness’ and photography’s sophisticated surface detail, offering, in talismanic form, an alternative grasp of the relationship between two-dimensional image and three-dimensional physical presence.

Catherine Wood is Curator of Contemporary Art and Performance, Tate Modern and Tate Britain. She is co-curating, with Beatrix Ruf, ‘Theatre Pieces’ for the 3rd Tate Triennial and co-editing a book on spectator participation with Jessica Morgan and Anna Dezeuze for MIT Press.