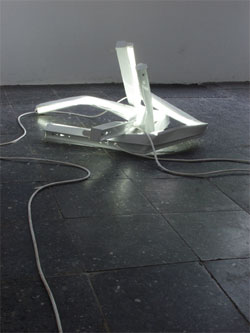 Simon Dybbroe Møller’s working method offers a welcome alternative to thinking about art history as a daunting public library with strict rules for readers. For him it’s a place to browse – more like an idiosyncratic second-hand bookshop in which the filing and cataloguing have gone a bite awry here and there. It is in these odd corners, where mysticism can be found rubbing shoulders with volumes on Conceptual art, Pop music and Concrete poetry, that he produces his best, most free-spirited, work.

Last year, at Art Forum Berlin, Dybbroe Møller created a gallery stand that looked like a carefully thought-out group show and applied the Modernist dogma that the construction of anything new requires some reciprocal act of destruction. One of the cheap partition walls was turned into the roughly sawn-through Slap (R. Morris) (2004), while the gallerist and her visitors sat on mock trashed versions of Gerrit Rietveld’s ZigZag chair around a remake of Superstudio’s Quaderna table, with each piece of furniture given a lyrical title along the lines of Because we didn’t talk all day (2004). It was tempting to think these works had been hurriedly delivered by the world’s most slapdash firm of art transporters, to judge from the bent and twisted but surprisingly still functional Dan Flavinesque fluoro plonked on the floor, entitled Like those sheets of paper containing absolutes once believed (crumpled together and thrown in the corner, 21st of January, 2001) (2004). The only calm element here was the serene series ‘Unfold your Dreams’ (2004) – origami photograms looking like specimens of vintage Geometric Abstraction.

All manner of references, quotations and re-creations appear in Dybbroe Møller’s work, but they are often in an unfamiliar setting, creating an effect a bit like being at a party where none of the guests knows anyone except the host. Occurrence #2 (2004), for example, consists of the paperback crime novel While My Pretty One Sleeps (1989), by Mary Higgins Clark, lying open on a plinth like a piece of important evidence promising some kind of insight. The open page on one side is torn diagonally, so that the text flows uninterruptedly on to the text on the page beneath it, and one of these hybrid paragraphs is marked with an emphatic circle in red ink. Seemingly a coincidence, the passage makes a kind of sense despite being made up of the beginning of one sentence and the end of a completely different one. It reads: ‘Although we cannot grasp the perfect harmony, the absolute equilibrium of the universe, each and everything in the universe (every motif) is nevertheless subordinated to the laws of this harmony.’ But then the words start unravelling and drift off into random nonsense: ‘This equilibrium watched as they spread powder thrifty along the way …’. The secret ‘message’ contained between the pages is in fact a piece of meticulous counterfeiting, involving the subtle insertion of a quote from Theo van Doesburg’s Principles of Neo-Plastic Art (1924).

Dybbroe Møller has a thing about the physical properties of paper – the pages of a book, scribbled notes, cardboard record sleeves and posters. Anyone on the streets of Berlin before his recent solo exhibition might have seen his sombre black poster In Concert #1 (2004), which he subsequently tore down and hung in the gallery, framed. It announced: ‘Rational Mysticism – we are mystics rather than rationalists we leap to conclusions that logic cannot reach.’ In the complete absence of any further information, who knows what conclusion passers-by might have reached? The quote is in fact a combination of one of Dybbroe Møller’s most important inspirational sources, the work of Swedish writer August Strindberg, and a slightly amended line from Sol LeWitt – changing the subject of his dictum from Conceptual artists to ‘we’. The exhibition’s title, ‘ABABCB’ (2005), was not a dyslexic homage to ABBA but actually referred to the basic elements of a pop song: verse, chorus and bridge. A large print, Aarhus, Winter 1993 (2004), showed a black light rock group in what looked like carefully posed euphoria, but by tracing the outlines of the bodies and their equipment the image spelt out the word ‘chance’ – a not immediately obvious visual pun.

Dybbroe Møller’s combination of popular music with Conceptual art’s systematic processes and forms at times recalls works by Stephen Prina, Jonathan Monk and Dave Allen. But he also shares with these artists’ a taste for wit and formal exactitude. Untitled, Uncovered and Incomplete by Chance (in Bloom) (2005), for instance, involved recording on vinyl a cover version of Nirvana’s song ‘In Bloom’, played on a guitar detuned in accordance with Strindberg’s instructions for random tuning. With it was a faux seven-piece open cube from Sol LeWitt’s ‘Variations of Incomplete Open Cube’ series (1974), reduced to 7-inches, that served as a receptacle for the record sleeve. Dybbroe Møller obviously enjoys using apparently rational processes to achieve quietly mystifying results.