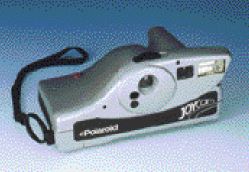 Early on in his final book, in a brief phrase within a parenthetical statement, Roland Barthes stops, considers, and moves on: 'Polaroid? Fun, but disappointing...' Momentarily charmed by the idea of instant pictures, Barthes doesn't want to linger - 'fun' will not play a role in what he has to say about photography. Yet, how odd to even see such an incongruous word amidst the rapt, death-obsessed prose of Camera Lucida (1980). Is there something more going on here than just a judgement rendered on a particular technology? Is the 'fun camera' an object in its own right? All photography has the potential to be fun, to provide unserious, inconsequential pleasure. But there seems to be a certain breed of camera specifically engineered to produce fun, or at least sold with that in mind. Do gimmick cameras, novelty cameras - with all the pejoratives those words imply - have an identity? More purposeful than toys but more frivolous than tools, these devices seem to occupy a special place within the range of photographic equipment.

Now is certainly a boom time for the fun camera: manufacturers everywhere are rushing all sorts of image-making curiosities to market. Some are explicitly for children, grafting photographic equipment onto pre-existing toys. There's a Barbie digital camera, part of Mattel's new line of technology for girls, in hot pink and pearlescent white plastic, like bad costume jewellery. Its software lets you download pictures of yourself into Barbie's world so you can play tennis and ride in convertibles with the impossible doll. You can buy a camera attachment for the Nintendo GameBoy: it takes strangely compelling low-res shots that can be manipulated and printed out as stickers. And, in malls throughout the world, Japanese Print Club photobooths speak in cartoon voices, beckoning passers-by to sit for miniature portraits.

Most significant perhaps, is the new product line from Polaroid itself, the mothership of photographic fun. The i-Zone and the Joy Cam, both introduced last year with a massive ad campaign, are the company's first new consumer products in years. The cameras are small, brightly-coloured, and very cheap. (Although the film is decidedly not.) The i-Zone, modelled after a popular Japanese toy camera, takes tiny, sticker pictures. The Joy Cam's compact size and signature appearance (it looks like a mobile phone, actually) are meant to attract a hip, youthful crowd to the somewhat stodgy world of amateur photography. The TV spots for the i-Zone are a series of mystery narratives, brilliantly answering the obvious question: what the hell is the point of an instant camera that produces tiny, adhesive-backed images? In one ad, a boy on a scooter picks up a cute hitchhiking girl. For the duration of the ride she is silent, seeming to ignore him, but constantly snapping pictures of herself. As he drops her off at her house and rides away, we see that she has covered the back of his helmet with the photos and scrawled her email address in marker (write to her and the Polaroid Corporation will start a correspondence with you). In other commercials, pretty teenagers find new ways to fill their lives and their bedrooms with wee photographlets of all their friends. The Joy Cam adverts subtly hint at the camera's potential for taking dirty pictures of loved ones (we all knew that was the whole point of Polaroids, didn't we?). The cameras are breaking all the company's sales records: last year, the i-Zone was the most popular camera in the US.

There's a more exclusive kind of fun emerging from Europe, one that's closer to the art world. The Lomo Kompakt Automat is the novelty camera for hipsters - an obscure Russian point-and-shoot that's become a trend. The camera itself couldn't have less in common with Polaroids' candy-coloured plastic baubles: it's black and clunky, a legacy of Soviet technology. But that homeliness is part of its appeal. At a time of slim, silvery nano-cameras, the 'Kompakt' is a bit of a retro joke. Focusing is difficult, the viewfinder almost useless, but the blurred pictures it takes are luminous and colourful. The camera was 'discovered' in Prague by a couple of Austrians, who set about obsessively photographing their friends, throwing Lomo parties, and assembling huge Lomo-collages. Eventually, they negotiated exclusive rights to distribute the camera outside Russia. By all accounts, the manufacturers, whose bread and butter comes from microscopes and night-vision equipment, were a bit baffled by the interest in the low-tech camera. The Austrians founded the Lomographic Society International (which now has 50 'embassies' around the world), and Lomography was born. As Time magazine put it, 'what began as a parlour trick has become a cultural event'.

The principles of Lomography are laid out on the Society's website, in deadpan, breathless prose that reads like a cross between a lost Futurist manifesto and a boy band fanzine: 'It comes from St. Peterburg and is the only one to use Professor Radionov's extra-special and totally sexy lens it is the close-up/long range night vision and ever-watchful glass eye from Russia with the relentless wink...' The commandments of the new art form insist you don't think, don't focus and, most of all, take lots and lots of pictures. Cleverly turning the limitations and accidental effects of the camera into a kind of kitsch aesthetic, the distributors have hit pay dirt. Though it sells for about $20 in Russia, ordering it from the Society will set you back $150 (though you do get a membership, and two rolls of film). Clearly, something more than just a camera is being marketed here. Or maybe something less - it's hard to decide.

Perhaps it's precisely that undecided relationship which is the sign of novelty. The work of photography - documenting important events, preserving family memory, creating images worth thinking about - is usually done by 'real' cameras. There is, therefore, something vaguely unreal about their less serious relatives. They belong as much to the history of marketing as the history of photography. But that's the point. Gimmicky cameras traffic in inessential innovation, differences that don't make a difference. Conventional photo technology typically advances in a laundry detergent notion of progress, each new generation of camera or film stock promising to make your whites whiter, your blues bluer, your flowers more floral, and your family vacation more memorable. Novelty - as opposed to a more earnest 'newness' - provides a respite from the forced march towards higher resolution.

Imperfection, of course, has its own aesthetics. The unfocused blur of the Lomograph, the cute miniaturism of the i-Zone sticker - these obviously have their attractions. It was a lack of resolution that lured artists to the Fisher-Price PXL 2000 toy video camera, released in 1987 and discontinued shortly thereafter. A failure as a toy, the simplified black and white pictures of Pixelvision made it a coveted cult item for artists bored with sharpness and control. In a high-tech world, low-tech images can seem closer to the 'truth' to which photography was always supposed to have privileged access.

Perhaps the image is not what's important, maybe part of the novelty of novelty photography is the irrelevance of the photographs themselves. The copy on the Polaroid website says it all: 'the i-Zone isn't about taking pictures - it's about what you decide to do with them'. Similarly, Lomography, according to the Society, 'produces veritable floods of pictures. All over the world millions of Lomographs are being taken, collected, hoarded, stacked. They are changing hands and being shown.' What the picture portrays is less significant than where it ends up. These photographs are, first and foremost, designed to be shared: fun is not something you have alone. (It's perhaps worth recalling that camera, in its original meaning of 'chamber' is the source of the word 'comrade'. Soldiers billeted together in the same barracks became comrades.) The fun camera jettisons the weight of conventional image-making - the weight of the image itself - so its products can travel more lightly in the public sphere.

Even though most of these cameras are analogue, low-tech devices, the model here would seem to be the Internet - these pictures are not exhibited so much as posted. They don't end up in a photo album, on a shelf, or in a frame in a gallery, but in some real-life equivalent of virtual space. Like the personal website, the wall of Lomographs and the teenager's bedroom filled with i-Zone stickers function as open records of the everyday, celebrations of the unexceptional. Not the special 'Kodak moments' of conventional photography, but non-events made visible. Disappointing perhaps, but fun.