The epic and the everyday; theatre, bats, puppets and paintings 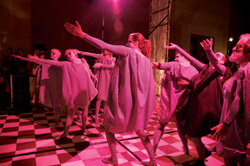 Last year, on her 33rd birthday, the British artist Lali Chetwynd changed her first name to Spartacus, after the gladiator and leader of an audacious, ultimately unsuccessful slave uprising against Rome in 73–70 bc. Not quite a stage name like Meat Loaf, a pseudonym like Marcel Duchamp’s Rrose Sélavy or a Subcommandante Marcos-type nom de guerre, Chetwynd’s adopted moniker seems designed to make us stage a mock-heroic mini-drama in our minds, in which she persuades a band of artists to stop pitting themselves against each other and instead revolt against their masters. Push this fantasy a little further (and Chetwynd’s art is nothing if not about pushing idle thoughts as far they’ll go), and we might imagine the defeated rebels refusing, pace Stanley Kubrick’s 1960 film Spartacus, to identify their chief, instead claiming one after the other ‘I’m Spartacus’, only to be symbolically crucified by a poor auction result or a less than complimentary review. If this flight of fancy resembles the absurd, unexpectedly telling narratives and motifs that characterize Chetwynd’s work, then this is no mistake. In her practice the epic and the everyday speak through each other in accents of giggled hope.

Over the past few years Chetwynd has, with the aid of an elastic troupe of some 20 friends and family members, staged a number of performances that draw on everything from Conan the Barbarian (1982) to The Incredible Hulk, from the performances of Yves Klein to Hokusai’s erotic print The Dream of the Fisherman’s Wife (1820). Equipped with jerry-built costumes and props formed from an assortment of found materials, the artist and her mummers’ band tell tall tales in a manner that recalls at once the theatre of Alfred Jarry and Bertolt Brecht, a disco at a science-fiction convention, and a primary school nativity play. Although carefully produced, these spectacles seem always to teeter on the brink of joyful anarchy: the performers sip beer, extemporize lines and distractedly check their text messages, as though what’s important here is not persuading the audience to suspend their disbelief but instead to introduce a measure of the carnivalesque into everyday life. While future art historians are likely to read ritualistic, socially dynamic dramas such as 2003’s An Evening with Jabba the Hutt – in which the grotesque Return of the Jedi (1983) villain is re-imagined as a smooth ladies’ man – through the lens of Chetwynd’s undergraduate training as an anthropologist, I can’t help but think her works are just as influenced by the let’s-put-the-show-on-right-here-kids attitude found in the BBC children’s television series Why Don’t You? (1973–95).

First staged as part of last year’s Tate Triennial, Chetwynd’s The Fall of Man (2006) took the book of Genesis, John Milton’s Paradise Lost (1667) and Karl Marx and Friedrich Engels’ The German Ideology (1845) and transformed these texts into puppet plays, performed by a troupe of sad-faced pierrots manipulating potato marionettes on two miniature cardboard stages. Surrounded by a gaggle of volunteers, got up as mutated Muppets, the audience was treated to both a religious and a secular myth: the story of humanity’s separation from God and its possible redemption through the division of its labours. While rubbing these lost and potential Arcadias against each other risks heavy-handed banality (who in the audience, after all, had not identified difficulties in the Bible or Marx long before the night of Chetwynd’s performance?), it’s the very sincerity of the artist’s approach, her utter commitment to the quixotic and the plain silly, that makes her work sing. By reading these sacred texts not as allegories or manifestos but simply as stories, and then adapting them as one might any other story, she allows us to feel their promise and problems anew. Literalism is an unlikely strategy for getting under the skin of a given cultural artefact, but in Chetwynd’s hands it’s both effective and serious, very human fun.

While Chetwynd’s performances are sprawling public affairs, her ‘Bat Opera’ paintings (2002–ongoing) on canvas paper, which measure a uniform 15 × 20 cm, appear much more intimate. Initially the works were populated by snub-nosed bats depicted, in the manner of heroic portraiture, against squally incarnadine skies, but more recent works in the series depict lonely bits of imaginary architecture that, with their eaves and dark, tiny windows, might be dwelling places for the titular flying rodents. And yet, while these images are small in scale (one might imagine them being produced in a tiny bed-sit), their invocation of the grand scope of opera and their churning, Baroque cloudscapes point to something bigger. As with the artist’s costumes and props, and even her new sword-and-sandals appellation, it is a meagreness of means that allows her to square up to the epic, deconstructing its tropes and then reconstructing them as something provisional, a little ragged around the edges but always full of hope and hardcore joy.