What do lectures reveal about the lecturer? 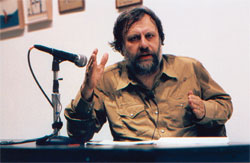 ‘I don’t want to be a professor (it’s almost a pleasure to contemplate the mess of this job)’, wrote Samuel Beckett in 1931, half-way through an ill-starred stint as a lecturer at Trinity College Dublin. Students recalled a teacher who sullenly refused to engage his audience: ‘gazing out of the window … [he] did not look at us or address any of us but appeared to be talking to himself … as if he were in a trance’. They agreed about his brilliance; in his distracted monologues they might also have been hearing the first whispers of his exhausted characters, declaiming into the dark. But Beckett’s is not a teaching strategy that would get him far in academia nowadays: inspectors would pounce, and end-of-term student reports damn his indifference to lesson plans, PowerPoint presentations and ‘learning outcomes’. In an era when teaching often feels like convening some dismal focus group or cosy religious retreat, it’s worth reminding yourself that the best teachers you ever had were the ones who just stood there, telling you stuff.

The traditional lecture, however, lives on thanks to the very technology that institutions like to imagine makes their output more snappily interactive, less sententious, intimidating or élitist. The art world, in particular, seems addicted to the format, and every address by an eminent lecturer is now immediately archived on the websites of galleries, museums and art colleges. In a single afternoon you can visit numerous airless auditoria and overcrowded gallery spaces enclosing tiny figures you’re straining to see or hear. There is Alain Badiou in his tight white polo-neck, the shade of Jacques Derrida in Brighton, Tacita Dean at Tate Modern. Thanks to the abiding wonder that is ubu.com, Robert Smithson, just out of shot beneath his slide show at the University of Utah in 1972, essays a deadpan tour of the ruins of Hotel Palenque. Count the hours of QuickTime stutter and mp3 hiss, and you have a fractured course of home study, entirely devoid of patronizing efforts to solicit your enthusiasm or measure your response.

Unsurprisingly, the face that appears most frequently in online archives is that of Slavoj Žižek, who encapsulates exactly the contradictions at work in this odd survival of an obsolete form of pedagogic address. At Deitch Projects in New York in 2004, with an adoring horde cross-legged in front of him, he apologizes for his lateness, disavows the set-up of podium and crowd and bluffly affects to loathe the whole ritual. In fact, Žižek seems conflicted when it comes to speaking in front of an audience at all: in Sophie Fiennes’ film The Pervert’s Guide to Cinema (2006) he literally vanishes into his cinematic subject matter, lurking in Norman Bates’ basement when he talks about Psycho (1960), or hiding out in the wardrobe while discussing Blue Velvet (1986). The philosopher maintains his ceaseless monologue, but the film is strenuously trying to make the teacher disappear. By contrast, in Astra Taylor’s documentary Žižek! (2005) he is all pedagogue, all of the time: he never shuts up, admits that his particular neurosis consists in a horror of his own silence and dismisses mere fans and autograph hunters as creeps and hysterics.

The key scene in Žižek! comes, however, when the Lacanian is confronted with the image of his intellectual progenitor. Žižek is seen watching a lecture that Jacques Lacan gave for French state television in 1973: ostensibly an interview, the performance was scripted by its subject, who early on announces that he will make no concessions to ‘idiots’. But the supposedly sober articulation of Lacanian precepts soon degenerates into bizarre comedy. Standing behind an antique desk, and with an unidentifiable blur of a painting behind him, Lacan gesticulates madly, drags out certain words (‘effervescence’, ‘undulation’), raises his voice to an alarming shriek. Download the entire programme (also at ubu.com) and it is like watching a satire of the psychoanalyst as theatrical guru, or a Beckettian study of a character’s desperate urge to be listened to, or not listened to. (Lacan’s long pauses and stilted movements make this a fitting contemporary to Beckett’s 1970s’ TV works.) It is somehow not a lecture at all but a protracted avoidance of having to submit his thought and words to the implacable recording gaze of the camera. Žižek is appalled at this ‘pure fake’: only the thought matters, he says, before turning off the TV, leaving unsettled the question of his own, and every teacher’s, inevitable fakery.

There is certainly something excessive and invariably embarrassing, about any effort by a teacher to suborn our attention by means other than words alone. A minimal amount of walking about behind the lectern is enough to keep most audiences awake; the rest is thought and rhetoric. And this is perhaps why the internet lecture seems, in its antique way, a modestly liberated format. Stripped of the paraphernalia of the institution – the tedium of long-winded introductions, the mortuary air of an excessively reverent audience, even (if you’re lucky) the entire Q&A fiasco – the lecture starts to sound sober, undemonstrative, neutral and inviting: rather like the seductive sound of Roland Barthes’ voice, of which I have a good 24 hours’ worth still to download.