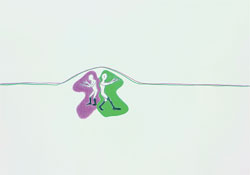 Chief among the pleasures of Takehito Koganezawa’s work is its understatedness and transparency in the service of big ideas – specifically time, or as he describes it, ‘the point between one moment and the next’. It’s not easy to take on such a weighty theme without sinking into ponderousness or preciousness. Koganezawa avoids these traps with a light touch and wry humour. The full effect of his work is available only with patient, attentive watching. This isn’t everyone’s idea of fun, but at its best, his exhibition ‘Sex Without Sex’ had that rare quality of true subtlety.
RGBY (2004) was a simultaneous three-panel video projection. Beginning with his own coloured-pencil lines in red, green, blue and yellow, Koganezawa then scanned the freehand drawings into a computer, joining the lines and then passing them through an animation programme. The result is a loop of vary ing textures and widths that seems always on the verge of petering out. Within each separate panel the lines link, overlap and split apart, creating a delicate anxiety: you’re never quite sure where to look, and you also can’t quite believe you’re mesmerized by something so mundane. By merging low with high tech Koganezawa gives the piece a restrained tension and startling variety. The casual lines shoot up, down and sometimes across, spurting like jets of water. Watched long enough, they become increasingly substantial, separating themselves enough from the wall to appear to encircle it. Despite or maybe because of its informality, the piece made an impression that verged on the tactile or even auditory (though there’s no soundtrack). Its sheer simplicity frees rather than dictates imagination, and the lines acquire a strange heft, or even a certain audacity.
The show’s title video (Sex Without Sex, 2004) consisted of adjacent monitors, each screening a six-minute loop. The subjects were groups of two, three or more Asian men in their 20s or early 30s, all wearing trainers and dressed in white button-downs, their shirt-tails skimming black trousers. Set in what looks like an industrial park, the action is framed by an alley of corrugated manila aluminium that ends at a large, closed glass door. In total silence the groups of men shove and scuffle with each other, occasionally kicking. They poke and prod constantly, their movements full of muted menace. The uniforms, drab backdrop and unwelcoming glass door in which they’re reflected make the men seem quarantined. The balletic tussling has a musical cadence, particularly because the scrappers periodically freeze, pause for a second and then look directly into the camera.
This still point gives Sex Without Sex a startling authority, the young men’s faces possessed of the same frank gravity as those of a Masaccio or Filippo Lippi. The composition of many of the shots has touches of Pier Paolo Pasolini (whose own work was also influenced by those Florentine painters). Even the way Koganezawa’s camera rests on the young faces is reminiscent of Accatone (1961) or Mama Roma (1962), the subjects both exposed and dignified. Running the loops on adjacent monitors suggests surveillance, as if you’re privy to inside information – but watching the tapes only adds to what you don’t know. This also recalls early Pasolini, whose realism was less documentary than philosophical, more respectful of his subjects than his audience. Koganezawa is gentler, but those freeze-frames hint that the next quarry may be you.
His videos have an unusually sly, provocative plainness that undermines the show-all qualities of the medium. The compositions are stripped to bare essentials. Like someone who knows how to tell a joke, Koganezawa understands the value of timing, his pieces as steady and lingering as a measured backbeat.