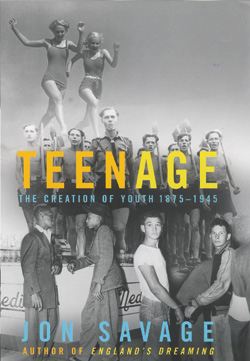 Best known for his pioneering history of Punk England’s Dreaming: Sex Pistols and Punk Rock (1991), Jon Savage is a writer whose fascination with the prehistory of cultural phenomena is matched only by the acuity with which he defines their consequences. As a Classics scholar with a pronounced interest in myth, astrology and the history of psychology, Savage’s writing on Pop and Rock music – as evidenced by his recent long essays on Joe Meek and Ian Curtis – is concerned above all with the patterning of allegory and archetype that takes place within its vivid history. Stars and producers, fans and managers, are brought to ceremonial life by his pen, their lives and careers describing often mesmeric arcs of destiny through the glittering and shadowy world of mass entertainment.

Savage’s writing combines intense historical research with novelistic and dramatic structure – the placing of detail, incident or a summarizing scene meticulously poised within the broader underpinning of a psychological insight. In the ‘Introduction’ to his selection of journalism Time Travel (1996) Savage employs this technique to introduce his thinking on Pop’s relation to the concept of youth and acceleration, and in doing so he rehearses one of the founding tenets of Teenage: ‘The message is in the insolent drones of the music: a direct challenge to the established order, whether the nursery demons of the music industry or authority figures like parents, teachers and politicians. I’m faster than you: I’m five years ahead of my time.’ These are the themes – youth, speed, time travel and confrontation – that comprise the core of Savage’s vision as a writer and from which, in Teenage, he has created quite possibly his masterpiece.

Concluding in 1945 (the very point at which teenagers are commonly identified as the new Atomic Age consumers of Pop trend), the book is an epic, filmic journey through the myths and gangs of many lands; even their names comprise an irresistible index of characters and types: hooligans and street toughs of the 1890s (meet ‘The Peaky Blinders’ and ‘The High Rip’), honourable schoolboys reared on Sir Henry Newbolt’s invocation of imperial team spirit, roller-skating flappers, Nazi youths, ‘neo-pagans’, Wandervögel, doughboys, ‘German swing kids and French Zazous’, to name but a few.

From such a cast of teenage tribes, passing from one to the other the batons of ritual disaffection and youthful exuberance, Savage creates an intensely coloured and deeply felt portrait of the psychology of adolescence. Beginning with a young female dreamer, Marie Bashkirtseff (the daughter of wealthy Russian émigrés in the closing years of the 19th century), and a young American killer, Jesse Pomeroy, Savage roots his study in the propensity for melancholy, violence and acute melodramatic romanticism that typifies the teenage condition.

Book-ending the emotional waveband of these states are two founding myths of popular culture, both linked to the parallel development of psychology and mass media: J.M. Barrie’s Peter Pan, from 1904, and L. Frank Baum’s The Wonderful Wizard of Oz, which was published in the autumn of 1900, within months of Sigmund Freud’s The Interpretation of Dreams. From the popular successes of these two novels Savage identifies the complex layers of psychology that then accompany the heightened emotional condition of adolescence and which encircle, at their most extreme, the Jungian state of puer aeternus that makes a prison, ultimately, of unchecked escapism.

The volatile, seductive and often doomed heroes of Teenage are almost without exception social outsiders, but Savage is equally consistent in his acknowledgement of the strength and glamour of much establishmentarian rhetoric, of the fact that Robert Baden-Powell’s constitution for the Scout movement, or Newbolt’s ‘Play up! And play the game!’, could be as seductive as ragtime, zoot suits or the street names of Nazi-era teenage anti-fascists. In this deft balancing of sympathies no less than in the acuteness of its psychological insights, Teenage reconfigures the prism through which we might examine the role of youth in the modern world and, in doing so, it has all the narrative urgency and emotional sweep of a great dynastic novel.