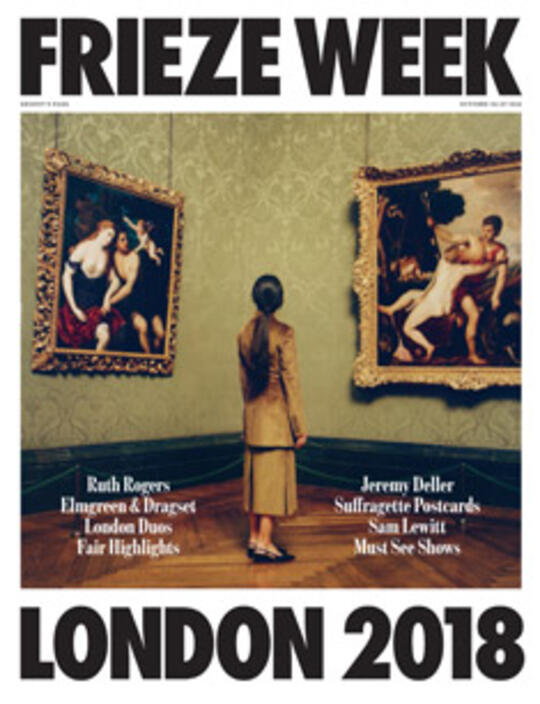 Following its involving and surprisingly moving ‘Raphael and Sebastiano’ in 2017, the National Gallery’s major autumn exhibition explores another pair of intertwined Renaissance careers. Andrea Mantegna – a pioneer of line and depth – and his brother-in-law, Giovanni Bellini, a poet of colour and atmosphere. With loans including The Feast of the Gods from Washington D.C. and the Triumphs of Caesar from Her Majesty the Queen, this stellar show promises to reveal how, despite their differing interests and approaches, mutual respect, influence and competition drove both artists towards some of the greatest achievements of the Quattrocento.

Serpentine Galleries offers a typically subtle and intriguing pairing for exhibitions in Frieze Week. At one gallery, Atelier E.B. – the collective practice of designer Bela Lipscombe and artist Lucy Mckenzie – push their logic of collaboration to the max. Exploring the image of the mannequin, ‘Passer-by’ comprises a showcase of the latest E.B. collection, a curated archival display, and new commissions by the likes of Tauba Auerbach and longtime collaborator Marc Camille Chaimowicz. At the other, a different sort of synthesis is expected from Pierre Huyghe. Acclaimed for his orchestration of complex ecosystems of multiple elements, Huyghe’s installation will respond to the presence of the viewer via LED screens, air conditions and insects.

Shortly after her release from an eight-month detention in her native Cuba in 2015, artist Tania Bruguera addressed Frieze Talks at Frieze London, declaring ‘you can only make political art where there is a need for it’. Today, when democracy seems at breaking point across the globe, the need seems as great as ever. For the 2018 Hyundai commission, Bruguera returns to the Tate Modern, where she has previously undertaken her ‘Immigrant Movement International’ project, submitting viewers to a lie detector test based on immigration interviews. Whatever she may be planning for the iconic Turbine Hall, Bruguera’s response is sure to be timely. Hear the artist in person at a special Frieze Academy event in London on 4th October: go to frieze.com/academy for details.