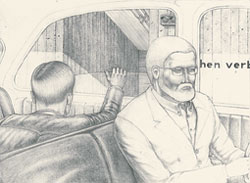 In Torsten Slama’s 2003 exhibition ‘Gardens of Machine Culture’ a group of drawings paid tribute to the tradition of Chinese landscape painting: water tumbling with calligraphic precision through craggy mountain passes and leaves arranged delicately on elegantly twisted trees. But within these oriental idylls rude reminders of ‘civilization’ appear: a modern, blocky, windowless building nestles, fenced in, at the foot of a hillside (Elektronic – Fachschule für unangepasste Jugendliche, Electronics School for Maladapted Youths, 2003); a bright yellow bulldozer razes a clear path through an undulating valley (Weiche, herbstnahe Luft weht von West, A Gentle, Autumn-like Breeze Blows from the West, 2003). They do not seem out of place, however, since Slama’s controlled hand sketches the building’s brick façades with the same even strokes and gentle colours as the contours of the landscape. Much as our environmental consciousnesses may want us to, we cannot read these scenes as neat moral statements about East versus West, or nature versus industrialization. They suggest rather a necessary co-operation between the landscape and the machinery that seems to be planted within it. The two are inextricably tied and, although we do not get a glimpse of any ‘maladapted youths’, a single bicycle leaning against the wall of the electronics school indicates a certain bleak hope in its regenerative capacity, rehabilitating society’s lost souls.
For the last few years Slama has restricted himself to working with (sometimes coloured) pencil on paper, producing drawings with a uniform quietness and immediacy that are hard to achieve with oil on canvas. His precise, measured technique is a foil, however, for the complex mises-en-scène he presents, where obvious stereotypes or binary oppositions are dislodged by a psychological undercurrent, hard to define but palpably present.
Like the eerily unpopulated landscapes, Slama’s scenes of individuals have a dreamlike quality, though with stronger insinuations of drama. One character in particular, a respectable-looking older man with white beard and glasses, appears in several earlier drawings titled Entführ ung, (Abduction, 2001), grabbing a young man by the arm or driving a car off while the young man in the back seat, head turned, looks out of the window. The older man reappears in Slama’s most recent works, with the sexually predatory overtones ever more apparent. In Begegnung mit der Autoritätsfigur (Encounter with the Authority Figure, 2005) he surprises a semi-clad youth in a locker room, gesturing towards his tight trunks with that classic Freudian/Magrittean prop, the pipe. But any conclusions we would like to jump to about perversion or corruption are pre-empted by the fact that all we are given is one scene from a discontinued narrative. The figures are cropped close into the rectangular frame of the paper; background details are reduced to a minimum. They share many characteristics with comic book drawing, but lack the preceding and subsequent frames to build narrative coherence, or the speech bubbles that add specific content. These drawings are resolutely silent and confront the viewer with a narrative involving individuals, or rather types, that the viewer is sure to recognize; the young and old man become stand-ins for the conflict between the unfettered spirit of adolescence and the inveterate obsessions of maturity. It is unclear which side the artist identifies with, however, and meaning remains determinedly open to interpretation, leaving the viewer alone to invest the figures with symbolic value and imagine the story being played out here.
Unsolved mystery, nostalgia, dream-like imagery, science fiction: Slama engages a variety of atmospheres to unhinge his pictures from their contemporary reality. In Der Hypnotiseur (The Hypnotist, 2005), as in the familiar dream where you suddenly have no clothes on, a man stands naked in the foreground, while behind him another man in a 1950s-style sharp suit and trilby skirts through the shadows in a shabby alleyway. Another drawing, die Präsidentin der Instrumentalität (She-President of Instrumentality, 2005), of a stern-looking woman with facial scars and a shiny machine where her legs should be, suggests a nostalgia as much for this outdated vision of a cyborg future as for the past that produced it. It is this candid use of forms we are all familiar with – the comic book action sequence, the detective novel cliffhanger, the science fiction TV scene – that the intensity of Slama’s works depends on. He plays on the assumptions built up by contemporary mass culture that Theodor Adorno describes in his analysis of television: ‘The very standardization indicated by set frames of reference automatically produces a number of stereotypes.’1 Isolated in single frames, Slama’s stereotypes range free, in our conscious as much as our subconscious minds.