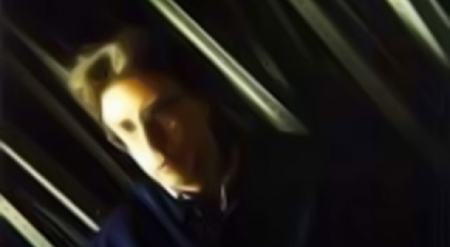 ‘In many horror stories there is an assortment of figures that appear as walk-ons or extras whose purpose is to lend their spooky presence to a narrative for atmosphere alone, while the real bogey is something else altogether. Puppets, dolls, and other caricatures of the human often make cameo appearances as shapes sagging in the corner of a child’s bedroom or lolling on the shelves of a toy store […] As backdrops or bit-players, imitations of the human form have a symbolic value because they seem connected to another world, one that is all harm and disorder- the kind of place we sometimes feel is a model for our own home ground, which we must believe is passably sound and secure, or at least not an environment where we might mistake a counterfeit person for the real thing.’

So writes the horror author Thomas Ligotti in his recently published book, The Conspiracy Against The Human Race (Hippocampus Press, 2010). The book is not a work of fiction – it is, instead, a work of amateur philosophy in the best possible sense, driven by a metaphysical hunger that is so often lacking in the work of professional philosophers. Ligotti is unembarrassed to return to those questions which academic philosophers typically disdain in favour of an entanglement in scholarly minutiae. Why is there something rather than nothing? Should we be glad to be alive? Ligotti’s answer to this latter question is emphatically in the negative. Possessed of a cold, sober seriousness that couldn’t be more at odds with the atmosphere of cheery vitalism and inane lightness that prevails in early 21th-century culture, The Conspiracy Against The Human Race has the feel of a 19th-century tract.

Puppets are one of the leitmotifs of Ligotti’s work, but the terror that they cause does not primarily arise from any malicious intentions on their part, or from the suspicion that they might secretly move when we do not watch them. Rather, the puppet is an emissary of what Ligotti repeatedly characterizes in The Conspiracy Against The Human Race as the ‘malignantly useless’ nature of the cosmos itself. The painted-faced marionette is a symbol of the horror of consciousness, the instrument which, for Ligotti, allows that ‘malignant uselessness’ to be perceived, and which brings all suffering into the world.

The puppet is a figure which belongs equally as much to the children’s story as to the weird tale. Ian Penman has written of how the most famous puppet story, Carlo Collodi’s The Adventures of Pinocchio (1883), ‘contains scarcely credible levels of cruelty and pain […] Accusations of abuse. Thrown hammers. Burned-off feet. Children used as firewood: innocence kindling. Curiosity rewarded with concussion and kidnap. Hanging, amputation, suffocation. A snake laughs so hard at Pinocchio’s fear he bursts an artery and dies. On his way to school Pinocchio sells his schoolbooks to join a Street Theatre: forget education, become a marionette. A dancing fool. Apprentice Golem. Malignant clown. Neuter, castrato.’ (Penman’s remarks were made in the piece that he contributed to a book on Michael Jackson I edited last year – and Jackson’s own story is one in which kitsch and gothic, puppet and master manipulator, frequently reversed into one another.)

On his blog on memory and technology, Bat, Bean, Beam, the theorist Giovanni Tiso recently noted the echoes of Pinocchio in the Toy Story films. For the Marxist Richard Seymour, ‘Toy Story 3 is a story of how freedom is achieved through commodification, and how ‘the consent of the governed’ roughly equals the willing embrace of bondage […] Everyone, and everything, has its place in the Toy Story scheme of things. That scheme is a hierarchy of commodities with toys near the bottom, subordinate and devoted to their owners.’ Yet, as I’ve argued before, at an ontological level, the Toy Story films constitute something of a ‘tangled hierarchy’. The toys that are depicted in the films do not only exist at the ‘ontologically inferior’ level of the film’s fiction; they are real in the sense that you can buy them outside the cinema. In Ligotti, puppets and puppetry frequently symbolize this tangling of ontological hierarchy: what should be at the ‘inferior’ level of the manipulated manikin suddenly achieves agency, and, even more horrifyingly, what is at the supposedly ‘superior’ level of the puppet master suddenly finds itself drawn into the marionette theatre. Ligotti writes that it is a terrible fate indeed ‘when a human being becomes objectified as a puppet and enters a world that he or she thought was just a creepy place inside of ours. What a jolt to find oneself a prisoner in this sinister sphere, reduced to a composite mechanism looking out on the land of the human, or that which we believe to be human by any definition of it, and yet be exiled from it.’ With Ligotti, it is not clear which is the more terrifying prospect – an ultimate puppet master pulling the strings or the strings fraying off into blind senseless chaos.

Tiso noticed something peculiar about the desire of the toys in the Toy Story series: ‘what they like best is to be played with by children. But it so happens that at those times they are limp and inanimate; as is the case whenever they are in the presence of people, their spark abandons them, their eyes become vacant .’ It’s as if the message of the Toy Story films rhymes with that of Ligotti’s pessimistic tract: consciousness is not a blessing bestowed on us by a kindly toymaker standing in for a beneficient God, but a loathsome curse.