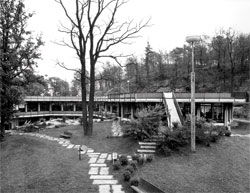 Set in the Alpine foothills of the Canavese, Ivrea is the former campus town of the renowned Italian typewriter company Olivetti. Until last year its exemplary social architecture was home to the Interaction Design Institute Ivrea, a research body founded by Olivetti and Telecom Italia (its owner), to carry on the company’s tradition of legendary innovation in design. The relocation of the institute to the Domus Academy Milan has taken some of the vigour out of the town, but what remains is a curious open-air ‘museum’ (the Museo a Cielo Aperto dell’Architettura Moderna di Ivrea (MAAM) ) that attempts to preserve (and conserve) a moment in history. It is disappointing that the interiors of most of the buildings are not accessible, but Ivrea should be required viewing for anyone in need of confirmation of Modernism’s successes.

With Olivetti came the company town, the ideal ‘workers’ village’, and with it a unique view of industrial Modernism manifested – beginning in 1934 – through an unusually sympathetic brand of Italian rationalism. Camillo Olivetti, the company’s founder, and his son and managing director, Adriano, were single-minded in their pursuit of an architecture that was an extension of the people who would use it. In addition, Olivetti became synonymous with a commitment to its workers, with services and benefits well beyond the norm elsewhere in Europe (with the possible exception of Bata in the Czech Republic or Sunila in Finland) or the US. In allying itself with the most forward-thinking aspects of contemporary culture, Olivetti provided its workers with an enormous lending library, schools and mountain-top summer retreats for their children, modern homes and flats surrounded by playing fields and allotments. The Olivetti vision was so complete it spawned a political party, Comunità, that, along with the model city, became a focal point of the Italian intelligentsia. The company’s graphic and product design, directed by Marcello Nizzoli, was graced over the years by the likes of Ettore Sotsass Jr, Milton Glaser, Mario Bellini and George Sowden.

Olivetti’s architectural and planning vision was led and primarily realized by house architects Figini and Pollini,
veterans of CIAM, the Gruppo 7 and MIAR (the Italian Movement for Rational Architecture). Figini and Pollini’s light touch and total immersion morally and politically in the Olivetti ‘cause’ produced careful town plans and thoughtful homes and public spaces. The nursery for employees’ children (1942) was built under wartime duress and materials rationing, but the boxy result is still a delicate study: a low exterior is clad in local stone that can appear to be the same colour as the foggy foothill weather or provide a graceful contrast in the summer sun. The entire composition – with a protected courtyard and vista-taking portico – is an organic response to its landscape that acts to accentuate its surroundings. The original redbrick Olivetti factory building was expanded in four different phases between 1934 and 1957, the most extensive and lasting of which was Figini and Pollini’s late 1950s’ work that fused a number of smaller plant buildings to become the Nuova Ico. Unified by a vast glazed wall facing via Jervis, the building reflects light and surfaces beautifully, and adds some interest to this otherwise bland stretch of road. In the rear of the building glazed yellow towers appear at regular intervals, interrupting planted balconies and louvred windows. Also not be missed is Edoardo Vittoria’s 1955 blue glazed Research and Development Centre (where Interaction Ivrea was headquartered).

Quality workers’ housing was a defining characteristic of Ivrea, and beyond the plants and factories is the Unità Residenziale Ovest (also called Talponia, or ‘mole city’, by Ivrea residents), by Roberto Gabetti and Aimaro Isola. One of the later commissions on the Ivrea campus (1971), it was notably advanced in design direction, drew comparisons to Frank Lloyd Wright’s Jacobs House in Middleton, Wisconsin (1946–9), and was described by some as a ‘non-building’. In today’s architectural climate, it appears less radical but is nonetheless striking in context. Built into the hillside at the western edge of the city, the graceful 300-metre-long arc of glass contains 85 flats facing a private landscaped space. An entire housing village called Canton Vesco was planned and built between 1943 and 1967. It was popular: low-density and attractive in a Corbusian white-and-primary-colour sort of way, it had its own nursery and church and was lushly landscaped. A less successful late addition was La Serra (1976). Often referred to as the company’s cultural centre, it resembles London’s Brunswick Centre somewhat, and its elaborate mixed-use programme in the old city featured a swimming-pool, cinema, restaurant and 55 ‘mini’ flats, which may have been its downfall: many of them had an awkward (and unpopular) 11-metre-long, 3-metre-wide footprint over four or five levels. Many Olivetti directors and managers were eventually built private homes, such as the Villa Cappellaro (1955) and Villa Rossi (1961), both strikingly articulated houses that appear very contemporary to this day. The former is perched on a small hill, contained by a decorated, ‘etched’ concrete wall. The living area projects severely from the front of the house, its own volume lined with punched grilles and shaded by wooden louvres. Villa Cappellaro is a less well-defined Villa Rossi, a confused experiment with its jumble of stone and stucco and five different volumes pivoting at the too-small centre, but daring nonetheless for the time.

The Olivetti vision, architecturally at least, wasn’t confined to Ivrea. In the 1960s retail outlets were commissioned around the world, with interior design and displays by Gae Aulenti and Carlo Scarpa and furniture by BBPR. In America, Louis Kahn was entrusted with a factory in central Pennsylvania that was realized as the vast concrete bunker one might expect, and Richard Meier was hired to design prototype Olivetti branch offices that were never built as the company headed nearer to bankruptcy through the mid-1970s. Kenzo Tange designed (somewhat brutally) in Yokohama; Marco Zanuso (beautifully) in Argentina and Brazil; James Stirling in the UK; and in New York, in 1967, Olivetti’s American headquarters took up residence in Gordon Bunshaft’s iconic Pepsi-Cola Building (1960). It would have been intriguing to see Le Corbusier’s plans (for two factories) from the early 1960s make it off the drawing-board.

While the intersection of tourism and the built environment is still poorly defined, and while towns built on architecture, if you will, make unusual spectacles (think of Disney’s Celebration), MAAM is an admirable start in codifying a tourism of architecture. Ivrea, it might be said, was built on typewriters, but the fact remains that this 2,000-year-old city’s greatest architectural achievement – a mere 100 years old – is less a spectacle than a wonder of urban, architectural and social planning.

Eugenia Bell is an editor and writer based in London.